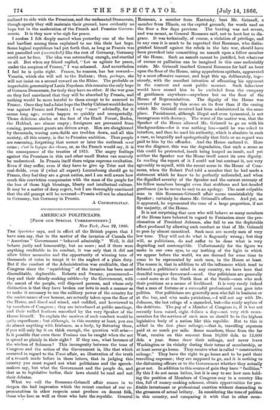 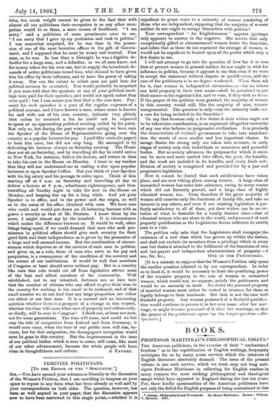 [FROM OUR SPECIAL CORRESPONDENT.]

New York, June 29, 1866. THE Spectator says, and in effect all the British papers that I have seen say, that in the matter of the invasion of Canada the " American " Government "behaved admirably." Well, it did behave justly and honourably, but no more ; and if there were anything creditable in its conduct, it was only that it did not allow bitter memories and the opportunity of winning tens of thousands of votes to tempt it to the neglect of a plain duty. But if the conduct of the Administration was creditable, that of Congress since the " squelching " of the invasion has been most discreditable, deplorable. Roberts and Sweeny, pronounced— they and their shindy-making rabble—by the Government, with the assent of the people, evil disposed persons, and whose only distinction is that they have broken our left in such a manner as to make it necessary to use the military power of the country for the maintenance of our honour, are actually taken upon the floor of the House, and dined and wined, and coddled, and kowtowed to by members of Congress ; they are introduced at public meetings, and their ruffled feathers smoothed by the very Speaker of the House himself. To explain the motives of such conduct would be quite superfluous ; but although, in this country at least, you can do almost anything with Irishmen, as a body, by flattering them, if you will only lay it on thick enough, the question will arise— Is it possible that even these Fenians can be caught when the net is spread so plainly in their sight ? If they can, what becomes of the wisdom of Solomon ? This incongruity between the tone of Congress and the action of the Government is, like that which occurred in regard to the Trent affair, an illustration of the truth of a remark made before in these letters, that in judging this country you must regard not what politicians and the speech- makers say, but what the Government and the people do, and that as to legislative bodies, their laws should be read and not their debates.

What we call the Rousseau-Grinnell affair comes in to deepen the bad impression which the recent conduct of our re- presentatives in other respects mast produce on decent folk, those who love as well as those who hate the republic. General Rousseau, a Member from Eentucky, heat Mr. Grinne,ll, a member from Illinois, on the capitol grounds, for words used on the floor a few days previous. The beating was not severe, and was meant, as General Rousseau said, not to hurt but to dis- grace. It was technically, of course, a violation of privilege, and in any case it is much to be regretted that Rousseau, who distin- guished himself against the rebels in the late war, should have been provoked into committing an assault upon a fellow member of the House. Such an assault cannot be justified, but whatever of excuse or palliation can be imagined in this case undeniably exists. Mr. Grinnell insulted General Rousseau for half an hour upon the floor of the House, using opprobrious epithets, aggravated by a most offensive manner, and kept this up, deliberately, inge- niously, with the manifest intention of affronting his opponent in the coarsest and most public manner. Such behaviour would have caused him to be excluded from the company of gentlemen anywhere—anywhere but on the floor of the House of Representatives. The dignity of the House was lowered far more by this scene on its floor than if the caning which Mr. Grinnell received had been administered in the same place. Punishment, although illegal and even tyrannical, is not incongruous with decency. The worst of the matter was, that the Speaker of the House allowed Mr. Grinnell to go on with his blackguardhlm—for it was nothing less—until he was asked to interfere, and then he used his authority, which is absolute in such a case, so languidly and apologetically that little or no regard was paid to him by the offender. And the House endured it. Here was the disgrace, this was the degradation, that such a scene as this could be protracted, insult being heaped on insult, and yet neither the Speaker nor the House itself assert its own dignity. In reading the report of it I could not but contrast it, not very agreeably to myself, with the recent scene in the House of Com- mons, when Sir Robert Peel told a member that he had made a statement which he knew to be perfectly unfounded, and when the dignified severity of the Speaker and the earnest entreaty of his fellow members brought even that stubborn and hot-headed gentlemen (as he seems to me) to an apology. The most culpable man in this Rousseau-Grinuell affair seems unmistakably the Speaker ; certainly he shares Mr. GrinnelPs offence. And yet, as it appeared, he represented the tone of a large proportion, if not the majority, of the House.