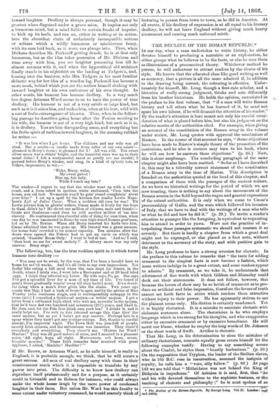 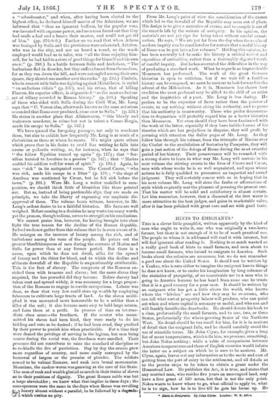 THE DECLINE OF THE ROMAN REPUBLIC.* Ler our day, when

a man undertakes to write history, he either devotes himself to producing a narrative or an explanation, he either groups what he believes to be the facts, or else he uses them as illustrations of a preconceived theory. Whichever method he pursue, he will endeavour to attract readers by the charm of his style. He knows that the educated class like good writing as well as accuracy, that a picture is all the more admired if, in addition to the drawing being correct, the colouring is effective. Unlor- tunately for himself, Mr. Long, though a first-rate scholar, and a historian of really strong judgment, thinks and acts differently from his brother historians. He holds the opinion, enunciated in the preface to his first volume, that "if a man will write Roman history and tell others what he has learned of it, he must not spare his own labour, if he will demand the attention of his reader." By the reader's attention is here meant not only his careful consi- deration of what is placed before him, but also his judgment on the relative merits of the authorities cited. For example, when giving an account of the constitution of the Boman army in the volume under review, Mr. Long quotes with approval the conclusions of Iltistow. In the course of that account he says, "Some objections have been made to Riistow's simple theory of the promotion of the centurions, and he who is curious may turn to his book, where he will see how he answers these objections." (p. 26.) Now, this is sheer surplusage. The concluding paragraph of the same chapter might also have been omitted. "So far as I have described it, this may be a tolerably correct statement of the constitution of a Roman army in the time of Marius. This description is founded on the authorities quoted at the head of this chapter, and a comparison of them with the passages of the ancient writers. As we have no historical writings for the period of which we are now treating, there is nothing to say about the movements of the Roman armies in the field beyond the vague and general expressions of the extant authorities. It is only when we come to emotes proconsulship of Gallia, and the wars which followed his invasion of Italy, that we have to deal with the writings of a man who tells us what he did and how he did it." (p. 29.) To invite a reader's attention to passages like the foregoing, is equivalent to requesting him to attend in order to yawn. Were not the practice of in- terpolating these passages systematic we should not censure it so severely. But there is hardly a chapter from which a great deal might not be expunged, or else placed as a foot note, without detriment to the accuracy of the story, and with positive gain to the style. Mr. Long professes to have a strong aversion for rhetoric. In the preface to this volume he remarks that "the taste for adding ornament to the simplest facts is now become a fashion, which some writers indulge in to a great extent, and some readers appear to admire." By ornament, as we take it, he understands that adornment of fine words with which Gibbon and Macaulay could deck out their statements. It does not follow, however, that because the lovers of show may be so lavish of ornament as to pro- duce an artificial and false impression, therefore the lovers of truth cannot set forth facts in attire which renders them attractive without injury to their power. He has apparently striven to use the plainest terms only. His diction is certainly unadorned. Yet it is highly rhetorical. It is a mistake to associate rhetoric with elaborate sentences alone. The rhetorician is he who employs language which is too strong for his thoughts, and who exaggerates either by excessive ornament or by excessive homeliness. Re will merit our blame, whether he employ the long words of Dr. Johnson or the short words of Swift. Artifice is rhetoric.

That Mr. Long, in his deterininaticut to shun the mistakes of ordinary rhetoricians, commits equally gross errors himself let the following examples testify. Having to say something severe about the Cimbri, he styles them "beastly barbarians." (p. 50.) On the supposition that Tryphon, the leader of the Sicilian slaves, who in 105 B.C. rose in insurrection, assumed the insignia of royalty, he calls him a 4‘ vain, silly fellow." Q. 82.) At page 142 we are told that " Mithridates was not behind the King of Bithynia in impudence." Of Aristion it is said, fir*, that "lie and his wife devoted themselves to the sophistic business, or the teaching of rhetoric and philosophy ;" he is next spoken of as

a "schoolmaster," and when, after having been elected to the highest office, he declared himself master of the Athenians, we are informed that "thus an ignorant buffoon, by the popular vote, was invested with supreme power, and men soon found out that they had made a fool and a knave their master, and could not get rid of him." (pp. 276-8-9.) Farther on we read that when Athens was besieged by Saila and the provisions were exhausted, Aristion, who was in the city, and not on board a vessel, as the words employed would lead us to infer, was "all the time enjoying him- self, for he had laid in a store of good things for himself and his own crew." (p. 288.) In a battle between Sulla and Archelaus, "The barbarians fled in disorder, but they sufferel most from themselves, for as they ran down the hill, and were entangled among their own spears, they shoved one another over the rocks." (p. 296.) Fimbria, who in concert with Sulla was fighting against Mithridates, is styled " an audacious villain" (p. 307), and his crime, that of killing Flaccus, his superior officer, is stigmatized "as the most audacious

\ act of villany recorded in Roman history." (p. 308.) Speaking of those who sided with Salta daring the Civil War, Mr. Long says that "C. Verres also, afterwards known as the most notorious scoundrel that Rome ever produced, came over to Saila." (p. 336.) He states in another place that Albinovanus, "this bloody and traitorous murderer, in crime but not in talent a Cesare Borgia, made his escape to Sulk." (p. 347.)

We have quoted the foregoing passages, not only to condemn them, but also to exhibit how frequently Mr. Long is as much of a rhetorician as those at whom he sneers. We might quote others which prove that in his desire to avoid fine writing he falls into coarse or pedantic writing, as, for instance, when he says that " the fellow Equitius turned up again" (p. 117) ; that " Ser- vilius hurried to Asculum in a passion" (p. 167) ; that "Marius scolded his soldiers well for want of spirit." (p. 195.) Again, he uses " sick " in its antiquated sense. The Consul Caesar, "who was sick, made his escape in a litter" (p. 194) ; "the siege of Asculum was continued by Cesar, but he fell sick before the town." (p. 201.) Were Mr. Long a writer unskilled in com- position, we should think little of blemishes like those pointed out. But as, instead of being pardonable slips, they are made on principle, we take the liberty of expressing our emphatic dis- approval of them. The volume bears witness, however, to Mr. Long's ardent desire to be a faithful historian. His facts are well weighed. Before coming to a decision he may waste too many words, yet the process, though tedious, serves to strengthen his conclusions.

We cannot praise him, however, for having brought into clear light the true reason for the decline of the Roman Republic. Indeed we donot gather from this volume that he is even aware of it. He enlarges on the increase of luxury among the rich, and of turbulence among the mass of the people. He points out the greater bloodthirstyness of men during the contests of Marius and Sulla for power than at any former period. But there is a cause, upon which he does not dwell, alike for the spread of luxury and the thirst for blood, and to which the decline and ultimate downfall of the Republic is unquestionably attributable. This is the fact of slavery. The conquests of the Romans en- riched them with treasure and slaves ; but the more slaves they acquired, the less powerful did they become. Before slavery had taken root and spread widely, it was necessary for a large propor- tion of the Romans to engage in servile occupations. Labour was