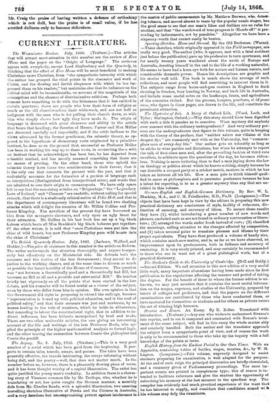 justice to the working classes, and at the same time

to disarm as much The Student's Guide to the University of Cambridge. (Bell and Daldy.) as possible the latent hostility of the House of Commons. The question —Second Edition. We call attention to this new edition of a very useful was "not between a theoretically good and a theoretically bad Bill, but little work, many important alterations having been made since its first between no Bill at all and a possible and substantial Bill." He touches publication in the regulations affecting the manner and period of taking briefly but vigorously on all the points that were started in the late the degree. For the benefit of those to whom the former edition is un- debate, and his remarks will be found useful as a résumé of the subject, known, we may just mention that it contains the most useful informa- even by those who differ from him in opinion. His own opinion is that tion on the usages, expenses, and studies of the University, prepared by the Government did right in proposing to extend the suffrage, because tutors of colleges and professors, and that the papers on the different "representation is bound up with political education, and is the soul of examinations are contributed by those who have conducted them, or political safety," and that their measure WU just and moderate, by no have mastered for themselves as students and for others as private tutors means leading to the rule of numbers, which he holds in abhorrence, the art of winning high honours. but conceding to labour the constitutional right, that in addition to in- Strauss and Ronan. An Essay. By E. Zeller. Translated with direct influence, has been hitherto monopolized by land and trade. introduction. (Trubner.)—Any one who wishes to understand Strauss's. There are two other noticeable articles, the one giving an interesting late reprint, and to see it compared and contrasted with Renan's treat- account of the life and writings of the late Professor Boole, who ap- meat of the same subject, will find in this essay the whole matter ably plied the principle of the higher mathematical analysis to formal logic, and concisely handled. Both the author and the translator approach and the other tracing the connection between Comte the philospher and the subject from a sympathetic point of view, and of course the work