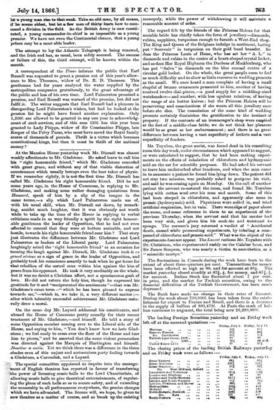 A correspondent of the 7'inzes informs the public that Earl

Russell was requested to grant a pension out of this year's allow- ance to Mrs. Thomson, widow of Dr. R. D. Thomson. This gentleman had for years analyzed the water supplied by the metropolitan companies gratuitously, to the great advantage of the public and loss of his own time. Lord Palmerston promised a pension, and Earl Russell was warned of the promise, but did not fulfil it. The writer suggests that Earl Russell had a pleasure in -disregarding Lord Palmerston's wishes, but had he looked at the pension list he might have found another explanation. Only 1,2001. are allowed to be granted in any one year in acknowledg- ment-of .such services, and of this sum 150/. has this year been ,granted to Lady Phipps, widow of Sir Constantine Phipps, late Keeper of the Privy Purse, who niu,sthave saved the Royal family -scores of thousands of pounds. Thrift is a virtue which becomes constitutional kings, but then it must be thrift of the national money?