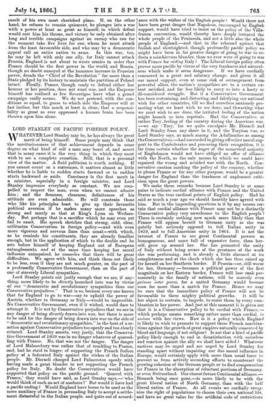 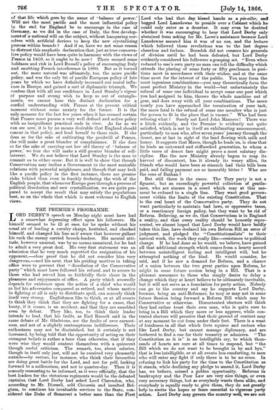 WHATEVER Lord Stanley may be, he has always the great merit of being himself. Some people may think that the meritoriousness of that achievement depends in some degree on what kind of self a man may boast of, and assert that in many cases it is the very thing in which they most wish to see a complete cessation. Still, that is a personal view of the matter. A fluid politician is worth nothing. If you cannot count on a statesman, it matters almost as little whether he is liable to sudden starts forward or to sudden starts backward or aside. Constancy is the first merit in a minister, especially in a foreign minister, and Lord Stanley impresses everybody as constant. We are com- pelled to respect the man, even when we cannot admire iilm; and the firmness, clearness, definiteness of his attitude are even admirable. He will constrain those who like his principles least to give up their favourite political aversion if he makes many more speeches as strong and manly as that at King's Lynn on Wednes- day. But perhaps that is a sacrifice which he may even yet fail to exact. His speech sketches that strong, cold, clear, utilitarian Conservatism in foreign policy—and with even more vigorous and nervous lines than usual—with which, as he reminds his constituents, they are already familiar enough, but in the application of which to the double end he sets before himself of keeping England out of European .entanglements, and at the same time keeping her moral influence unimpaired, he concedes that there will be great difficulties. We agree with him, and think them not likely to be less, even if they are not Much greater, on the part of a professedly Conservative Government, than on the part of one of sincerely Liberal sympathies.

Lord Stanley points out justly enough that we are, if any- thing, more likely to be directly launched into war by virtue of our "democratic and revolutionary sympathies than our Conservative prejudices." That is so, because every one knows that for England to go to war—say to uphold the power of Austria, whether in Germany or Italy—would be impossible. No Conservative Government, even if it wished, would dare to attempt it. It is not by Conservative prejudices that we are in any danger of being directly drawn into war, but there is more to be said for the danger of being drawn into war on the side of -" democratic and revolutionary sympathies," in the heat of a re- action against Conservative prejudices too openly and too clearly 'evinced. Lord Stanley asserts, very justly, that the Conserva- tive Government of 1859 was in no danger whatever of quarrel- ling with France. No, that was not the danger. The danger of Lord Malmesbury was rather that of truckling to France, and, had he staid in longer, of supporting the French Italian policy of a federated Italy against the wishes of the Italian people. Mr. Disraeli charged Lord Palmerston openly with having made a great blunder in not supporting the French policy for Italy. No doubt the Conservatives would have supported that policy on the pacific ground. Quarrel with France,' they would have said, as Lord Stanley says,—' who would think of such an act of madness?' But would it have had a pacific ending ? Would England have borne to be used as the mere auxiliary of France in persuading Italy to accept a settle- ment distasteful to the Italian people, and quite out of accord- mice with the wishes of the English people ? Would there not have been great danger that Napoleon, encouraged by English support, would have tried to insist on the policy of the Villa- franca convention, would thereby have deeply irritated the whole people of the Peninsula, and not a little also the whole people of England,—and that in the rebound against that foolish and shortsighted, though professedly pacific policy we might have been in far greater danger of going to war to re- deem a mischievous blunder, than we ever were of going to war with France for aiding Italy ? The Liberal foreign policy often proves more pacific by virtue of the very frankness and natural- ness which make it seem dangerous. If we have cordially concurred in a great and salutary change, and given it all our moral support, even at some risk of estrangement from powerful allies, the nation's sympathies are to a certain ex- tent satisfied, and far less likely to carry us into a hasty or ill-considered struggle. But if a Conservative Government has been restraining, and distorting, and falsifying our national wish for other countries, till we find ourselves anxiously pro- moting what we least wish to see done, and thwarting what we most wish to see done, the irritated feeling of the nation might launch us into reprisals. Had the Conservative, or rather Tory, feeling of the country during the American war, —we say Tory,' for we quite exculpate Mr. Disraeli and Lord Stanley from any share in it, and the Toryism was, as Lord Stanley says, as much among the Adullamites as among the Conservatives,—had succeeded in giving effective moral sup- port to the Confederates and procuring their recognition, it is far from certain whether the anger of the numerical majority of Englishmen would not have obliged an offer of alliance with the North, as the only means by which we could have repaired the wrong and avoided war with the North. Con- servative caution masking the policy of the country, whether to please France or for any other purpose, would be a greater danger for England than the frankness of unpleasant criti- cism upon the great powers.

We make these remarks because Lord Stanley is at some pains to indicate cordial affiance with France and the United States as the true cardinal points of English policy. Had he said as much a year ago we should heartily have agreed with him. But in the impending questions is it by any means cer- tain that cordial alliance with France may not be a distinctly Conservative policy very unwelcome to the English people ? There is certainly nothing now much more likely than that France will oppose herself to German unity as she was quietly but seriously opposed to full Italian unity in 1859, and to full American unity in 1864. It is not the interest of France to see great Continental powers as homogeneous, and more full of expansive force, than her- self, grow up around her. She has promoted the unity of Italy without being aware of the greatness of the work she was performing, and is already a little alarmed at its completeness and at the check which she has thus raised up for herself on her Southern border. If Prussia—or, still worse for her, Germany — becomes a political power of the first magnitude on her Eastern border, France will lose rank per- manently in the family of nations, will be scarcely even primus inter pares, for a united Germany would become soon far more than a match for France. Hence we may be sure that the immediate policy of France will not be favourable to these mighty political growths. It will be her object to restrain, to impede, to resist them by every com- bination in her power. And just at this moment it is given out that it is a Conservative policy to be cordial with France, — which perhaps means something rather more than cordial, in unison with her views. Now is it a policy which England is likely to wish to promote to support these French machina- tions against the growth of great empires naturally cemented by blood and language, if not religion? Is not that a kind of pacific policy likely enough to end in dissatisfaction with ourselves and reaction against the ally we shall have aided ? Whatever motives may be urged and are urged by Lord Stanley for standing apart without impairing our due moral influence in Europe, would certainly apply with more than usual force to prevent us from actively seconding efforts to counteract the growing cohesion of the German people or to find compensation for France in the absorption of reluctant portions of Germany, or even Switzerland. Our closest future Continental alliance,— Bismark being once gone,—is more likely to be with the great liberal nation of North Germany, than with the half liberal nation of France. At all events we cordially recog- nize the right of populations to choose their own national life, and have no great value for the artificial code of restrictions of that life which goes by the name of balance of power.' Will: not the most pacific andy the most influential policy in the end, for England be to encourage in the case of Germany, as we did in the case of Italy, the free develop- menteaf &national will on the subject, without hampering our- selves with artificial devices to keep the new crystallizing process within bounds ? And if so, have we not some reason to distrust this emphatic declaration that, just as true conserva- tive policy would have been quite in harmony with the views of Femme in 1859, so it ought to be now ? There seemed some boldness and risk in Lord Russell's policy of encouraging Italy and. snubbing French interference in 1860. But as it turned out, the more natural was ultimately, too, the more pacific policy, and was the only bit of pacific European policy of late years by which we have definitely increased our moral influ- ence in Europe, and gained a sort of diplomatic triumph. We confess that with all our confidence in Lord Stanley's vigour of purpose and strong wish to keep us out of entangle- ments, we cannot hear this distinct declaration for a cordial understanding with France at the present critical moment without some anxiety for the future. It is the only moment for the last few years when it has seemed certain that France must pursue a very well defined and active policy with no insignificant practical ends in view. As far as we can see now, it is by no means desirable that England should concur in that policy, and lend herself to those ends. If she does so for the sake of cultivating the goodwill of France, she will make a great blunder of complaisance. If she does so for the sake of carrying out her old theory of balance of power,' we fear she will make a still greater blunder of self- interest. We do not believe that Lord Stanley is the man to commit us to either error. But it is well to show that though Conservatism may incline a Government to the most amicable relations with powerful neighbours, and though that may look like a pacific policy in the first instance, there are greater risks behind than even in frankly declaring the wish of the English people, that whenever Europe goes through a process of political dissolution and new crystallization, we are quite pre- pared to accept the result that may satisfy the populations best, as on the whole that which is most welcome to English views.