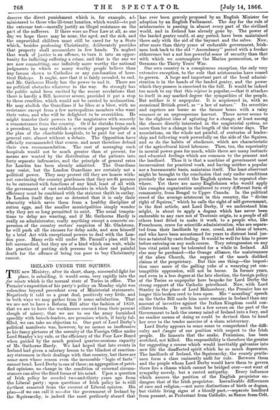 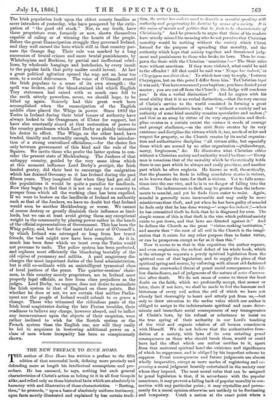 IRELAND UNDER THE SQUIRES.

Lord Derby appears in some sense to comprehend the diffi- culty and eauger of our position with respect to the Irish people. He laments that the snake, Fenianism, has been scotched, not killed. His responsibility is therefore the greater for suggesting a course which would inevitably galvanize into new life the disaffected spirit which he so much deprecates. The landlords of Ireland, the Squirearchy, the county gentle- men form a class eminently unfit for rule. Between them and the people whom Lord Derby would have them to govern there lies a chasm which cannot be bridged over—not want of sympathy merely, but a rooted antipathy. Every influence which assures the position of the English proprietor en- dangers that of the Irish proprietor. Ineradicable differences of race and religion,—not mere distinctions of birth or dogma, but visible living signs of a bloods past,—separate landlord the Squirearchy, is _indeed the most perilously absurd that from peasant, as Protestant from Catholic, as Saxon from Celt.

THE new Ministry, after its short, sharp, successful fight for place, is subsiding, it would seem, very rapidly into the far niente which is the normal state of Tories in office. The Premier's exposition of his party's policy on Monday night was colourless beyond precedent even of Ministerial statements. Negatively it told us a great deal, positively very little, and in both ways we may gather from it some satisfaction. That we are not to have a Reform Bill after the fashion of 1859, that we are to have the workhouses rescued from their present slough of misery, that we are to see the army furnished speedily with breech-loaders, are promises which, if fairly ful- filled, we can take no objection to. One part of Lord Derby's political manifesto was, however, by no means so inoffensive as his fancy pictures of the serenity of the Foreign Office under Lord Stanley's icy rule, or the efficiency of the Poor Law Board when guided by the much praised quarter-sessions capacity of Mr. Gathorne Hardy. We had hoped that late events in Ireland had given a salutary lesson to the blindest of reaction- ary statesmen in their dealings with that country, but there are some men whose reason even the inexorable "logic of facts" cannot bend. Lord Derby is one of these; an aggregation of petri- fied opinions, no change in the condition of external circum- stances can alter the fixed forms of his mind. Upon a question of Irish policy he seceded two-and-thirty years ago from the Liberal party ; upon questions of Irish policy he is still furthest removed from the current of Liberal opinion. His plan—if we can call it so—for the government of Ireland by

has ever been gravely proposed by an English Minister for adoption by an English Parliament. The day for the rule of aristocracies is passing in almost every part of the civilized world, and in Ireland has already gone by. The power of the landed gentry could, at any period, have been maintained there only with the aid of the bayonet and the sabre. Now, after more than thirty years of endurable government, Irish- men look back to the old "Ascendancy" period with a fresher abhorrence but a not less powerful sense of security than that with which we contemplate the Marian persecution, or the Germans the Thirty Years' War.

Our own country is a conspicuous exception, the only very extensive exception, to the rule that aristocracies have ceased to govern. A large and important part of the local admini- stration is in the hands of the landed gentry, and the power which they possess is exercised to the full. It would be indeed too much to say that this re:qinze is popular,—that it attaches to itself in any marked degree the sympathies of the people. But neither is it unpopular. It is acquiesced in, with an occasional British growl, as "a law of nature." Its severities and caprices are borne as the farmer bears with a rainy summer or an unprosperous harvest. There never seems to be the slightest idea of agitating for a change, at least among the classes directly interested in the magisterial system, no more than for a change in the length of the winter days. The associations, on the whole not painful, of centuries of leader- ship and following work powerfully on the side of the Squires, and so do the habits of obedience, which are characteristic of the agricultural hired labourer. Then, too, the superiority in mental power goes for much, while there are many instincts and educated feelings which are common to the peasant and the landlord. Thus it is that a machine of government most inconvenient for practical work, and having neither a popular nor a bureaucratic basis, maintains itself. The least observant might be brought to the conclusion that only under conditions precisely the same could the English system be repeated else- where. Yet there are many Englishmen who would apply this complex organization unaltered to every different form of community, from Bengal to Upper Canada. In the political creed of the average aristocrat in this country, the "divine right of Squires," which he calls the right of self-government, is the first article, and Lord Derby, if we understand him aright, is about to apply a dogma which has never been endurable to any race not of Teutonic origin, to a people of all others least fitted to make it work, to a people who, like Frenchmen, crave for scientific administration, who are separa- ted from their landlords by race, creed, and ideas of tenure, and who have been accustomed for years to distrust local jus- tice as tainted by caste feeling. It would be well for him to pause before entering on any such course. Tory retrogression on any less vital point may be tolerated for a while in Ireland. All else may be pardoned—the Orange alliance, the maintenance of the alien Church, the support of the much disliked claims of the proprietary. But this one thing—the imposi- tion once more of the galling yoke of a wearying yet con- temptible oppression, will not be borne. In former years, and even in a less degree at the late election, the foreign policy of the Tories so unpopular here bespoke for Lord Derby the strong support of the Catholic priesthood. Now, with Lord Stanley in the place of Lord Malmesbury, the Premier has no longer this broken reed to lean upon. His "muzzling" speech on the Oaths Bill made him more enemies in Ireland than any amount of invective against the Italian Kingdom could con- ciliate friends. It needs but a few errors on the part of the Government to lash the uneasy mind of Ireland into a fury, and no readier means of doing so could be devised than to hand her over to the tender mercies of a sham aristocracy.

The Irish population look upon the oldest county families as mere intruders of yesterday, who have prospered by the extir- pation of "the good old stock." Nor, to say truth, have these proprietors ever, formerly or now, shown themselves capable of ruling or of winning the hearts of the people. Before the great Emancipation struggle they governed Ireland, and they well earned the hate which still in that country pur- sues the Orange flag. Their rule was marked by a long succession of brutal crimes and more brutal punishments, by Whiteboyism and Rockism, by partial and ineffectual rebel- lions, by wholesale hangings and butcheries, by every insult to the popular faith that petty malice could invent. At last a great political agitation opened the way, not an hour too soon, to a social deliverance. The voice of O'Connell roused the Irish populace to a sense of its own strength ; the spell was broken, and the blood-stained idol which English Tory statesmen had raised with so much care fell to the earth utterly powerless, never, we should hope, to be lifted up again. Scarcely had this great work been accomplished when the emancipation of the English middle class placed the Whigs in power. Since 1832 the Tories in Ireland during their brief tenure of authority have always looked to the Orangemen of Ulster for support, but have also constantly aimed at that restoration of power to the country gentlemen which Lord Derby so plainly intimates his desire to effect. The Whigs, on the other hand, have tended, timidly and unsteadily enough, towards the introduc- tion of a strong centralized officialism,—for the choice lies only between government of this kind and the rule of the Squires. We invite those who prefer the latter system to con- sider the present state of Mecklenburg. The Junkers of that unhappy country, guided by the very same ideas which at this moment influence Lord Derby's proteges, the Irish landed gentry, did their best to encourage the emigration which has drained Germany as it has Ireland during the past fifteen years. They imagined that when they had got rid of the populations it would be quite a paradise for landlords. Now they begin to find that it is not so easy for a country to prosper from which all the working class has been expelled. If we were to bestow on the landlords of Ireland an authority • such as that of the Junkers, we have no doubt but that Ireland would soon be another Mecklenburg, or worse. We cannot of course destroy or greatly diminish their influence as land- lords, but we can at least avoid giving them any exceptional weight in the community by placing power rather in the hands of the official representatives of Government. This has been the Whig policy, and, but for that most fatal error of O'Connell's, by which Ireland was estranged so long from her truest friends, the task might now have been complete. As it is, much has been done which we trust even the Tories would not presume to undo. The police system has been perfected, and replaces most efficiently the blundering brutality of the old regime of yeomanry and militia. A paid magistracy dis- charges the most important duties of the local administration, but is still co-ordinate with an unintelligent tyrannical class of local justices of the peace. The quarter-sessions' chair- men, in this country merely proprietors, are in Ireland most properly legal officials, as free from class prejudices as the judges. Lord Derby, we suppose, does not desire to assimilate the Irish system to that of England on these points. But whether he does or not, we are certain that neither Parlia- ment nor the people of Ireland would submit to so grave a change. Those who witnessed the ridiculous panic of the Irish local magistrates during the late Fenian troubles, their readiness to believe any charge, however absurd, and to inflict any inconvenience upon the objects of their suspicion, were rather inclined to wish for the Scotch system or the French system than the English one, nor will they easily be led to acquiesce in bestowing additional power on a class of men whose incapacity has been so conspicuously shown.