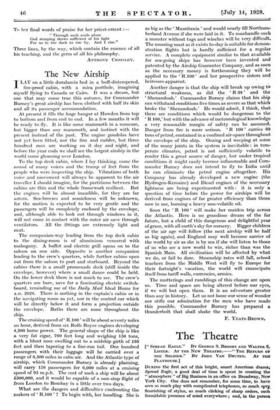 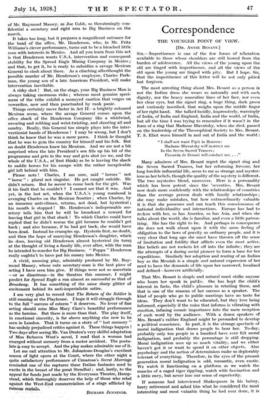 [" SPREAD EAGLE." BY GEORGE S. BROOKS AND WALTER S. LISTER. AT THE NEW THEATRE.-" THE RETURN OF THE SOLDIER:' BY JOHN VAN DRUTEN. AT THK PLAYHOUSE.] DURING the first act of this bright, smart American drama; Spread Eagle, a good deal of time is spent in creating the " atmosphere " of Big Business in an office on Broadway, New York City. One does not remember, for some time, to have seen so much play with complicated telephones, so much spry, flourishing of styles, so much clicking of sharp orders, such formidable presence of mind everywhere ; and, in the person

of Mr. Raymond Massey, as Joe Cobb, so threateningly con- fidential a secretary and right arm to Big Business on the march.

It takes too long, but it prepares a magnificent entrance for the head of the office, Mr. Henderson, who, in Mr. Fritz Williams's clever performance, turns out to be a bleached little man with interests in Mexico. And all you learn from this act is that Henderson wants U.S.A. intervention and consequent stability for the Spread Eagle Mining Company in Mexico ; and that, to get it, he is ready to subsidize a savage Mexican General to slash about there. As a clinching afterthought the possible murder of Mr. Henderson's employee, Charles Park- tnan, the young son of a late American President, will make intervention inevitable.

A risky shot ! But, on the stage, your Big Business Man is always taking enormous risks ; whereas most genuine speci- mens of the tribe exhibit a moneyed caution that verges on cowardice, now and then punctuated by rank panic.

Things certainly move faster in Act II—a brightly coloured Mexican scene, where the savage General comes upon the office shack of the Henderson Company like a whirlwind, swearing and robbing and wrist-twisting, and shooting all and sundry. Really, this General too simply plays into the inter- ventionist hands of Henderson ! I may be wrong, but I don't think he knew that he was a mere pawn. I think he thought that he was to gain the country for himself and his folk. But no doubt Henderson knew his Mexican. And we are not a bit surprised when the late President's son fills up his bit of the programme and gets in the way and gets shot (so we, and the whole of the U.S.A., affirst think) as he is leaving the shack to saddle horses for his escape with the rather inexplicable girl left behind with him.

Please note ! Charles, I am sure, said " horses " not " horse " : plural not singular. He got caught outside. He didn't return. But he meant to come back for the girl. Was it his fault that he couldn't ? I cannot see that it was. And yet, in the last act, when the U.S.A.'s young manhood is avenging Charles on the Mexican frontier ; when Charles, by an immense anti-climax, returns, not dead, but hysterical ; his mouth is stopped ! Mr. Henderson's indispensable sec- retary tells him that he will be broadcast a coward for leaving that' girl in that shack ! To which Charles could have replied that he didn't rescue the girl because he couldn't get back ; and also because, if he had got back, she would have been dead. Instead he crumples up. Hysteria first, no doubt, and then the hope of marrying Henderson's daughter, which he does, leaving old Henderson almost hysterical (in turn) at the thought of living a family life, ever after, with the man he intended to murder for Big Business. " Poppa " Henderson really oughtn't to have put his money into Mexico.

A vivid, amusing play, admirably produced by Mr. Ray- mond Massey, whose cute secretary-man is the best piece of acting I have seen him give. If things were not so uncertain —or so disastrous—in the theatres this summer, I might predict for Spread Eagle a run almost as successful as that of Broadway. It has something of the same sharp glitter of excitement behind its anti-imperialistic satire.

I am very glad to record that The Return of the Soldier is still running at the Playhouse. I hope it will struggle through to the full " success of esteem " it deserves. No lover of fine acting should miss Miss Mary Clare's beautiful performance as the heroine. But there is more than that. The play itself, in emotional sincerity, is far above anything else now to be seen in London. That it turns on a story of " lost memory " has unduly prejudiced critics against it. These things happen ! Two days after seeing Mr. Van Druten's very skilful adaptation of Miss Rebecca West's novel, I read that a woman had emerged without memory from a motor accident. The postu- late is easy to accept. And the play makes admirable use of it.

Let me call attention to Mr. Johnstone-Douglas's excellent season of light opera at the Court, where the other night a quite satisfactory performance of Cimarosa's Secret Marriage reminded one of the raptures these Italian fantasies used to excite in the breast of the great Stendhal ; and lastly, to the appeal for funds just made by the Everyman Theatre, Hamp- stead, which thoroughly deserves the help of those who rebel against the West-End commercialism of a stage afflicted by ruinous rentals.