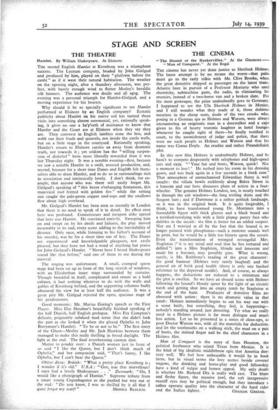 • , The Hound of the Baskervilles." At the Gaumont.— Man of Conquest." At the Regal THE cinema has never yet done justice to Sherlock Holmes. The latest attempt is by no means the worst—that palm must go to the early talkie with Mr. Clive Brooke, when the great detective shipped as passenger on the latest trans- Atlantic liner in pursuit of a Professor Moriarty who used electricity, submachine guns, the radio, in eliminating his enemies, instead of a two-horse van and a broken slate. For the most grotesque, the prize undoubtedly goes to Germany. I happened to see the Ufa Sherlock Holmes in Mexico, and I still wonder what they made of it, those dubious mestizos in the cheap seats, made of the two crooks who, posing in a German spa as Hohnes and Watson, were always encountering an enigmatic man in a deerstalker and a cape given to fits of hearty teutonic laughter in hotel lounges whenever he caught sight of them—he finally testified in court, to the astonishment of judge and police, that there were no such people as Holmes and Watson and that his name was Conan Doyle. An erudite and rather Pirandelloish plot.

In this new film Holmes is undoubtedly Holmes, and he hasn't to compete desperately with telephones and high-speed cars and 1939. " Your hat and boots, Watson, quick! Not a moment to lose! ' He rushed into his room in his dressing gown, and was back again in a few seconds in a frock coat." That atmosphere of unmechanised Edwardian flurry is well caught : the villain bowls recklessly along Baker Street in a hansom and our hero discusses plans of action in a four- wheeler. The genuine Holmes London, too, is neatly touched in through the cab windows—the long trailing skirts and the Sargent hats ; and if Dartmoor is a rather gothick landscape, so it was in the original book. It is quite forgivable, I think, to have transformed young Dr. Mortimer into a formidable figure with thick glasses and a black beard and a terrified-terrifying wife with a little plump pastry face who dabbles in the occult: the film is better for an added suspect. Nor am I worried at all by the fact that the hound is no longer painted with phosphorus—such a monster sounds well in print, but he would be a little too bizarre upon the screen. Even the transformation of wronged revengeful Mrs. Stapleton (" it is my mind and soul that he has tortured and defiled ") into a Miss Stapleton, blonde and innocent and made for a baronet, may possibly pass. What is wrong, surely, is Mr. Rathbone's reading of the great character: the good humour (Holmes very rarely laughed) and the general air of brisk good health (there is only one hushed reference to the depraved needle). And, of course, as always happens, the deductions are reduced to a minimum and the plot is swollen. So we have ari absurd scene with Holmes following the hound's bloody spoor by the light of an electric torch and getting shut into an empty tomb by Stapleton at the end of the hunt. Producers of detective films are obsessed with action: there is no dramatic value in that tomb: Holmes immediately begins to cut his way out with a scout knife, but something, they feel, is happening— nobody's standing around, just detecting. Yet what we really need in a Holmes picture is far more dialogue and much less action. Let us• be presented in a series of close-ups, as poor Doctor Watson was, with all the materials for deduction. and let the toothmarks on a walking stick, the mud on a pair of boots, the stained finger nail be the chief characters in a Holmes film.

Man of Conquest is the story of Sam Houston, the political freebooter who seized Texas from Mexico. It is the kind of big idealistic middlebrow epic that America does very well. We feel how unbearable it would be in book form, but in visual terms the love scenes beside covered wagons, the drinking and horse-play and good fellowship have a kind of vulgar and honest appeal. My only doubt is whether Mr. Richard Dix is really well cast. The blunt and fleshy figure, the massive jowl, the soft inexpressive mastiff eyes may be political enough, but they introduce a rather operatic quality into the character of the hard rider