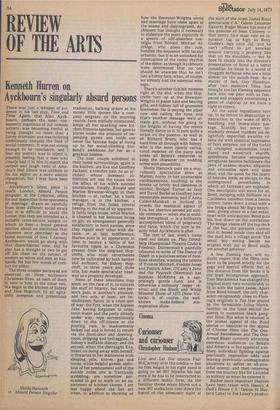 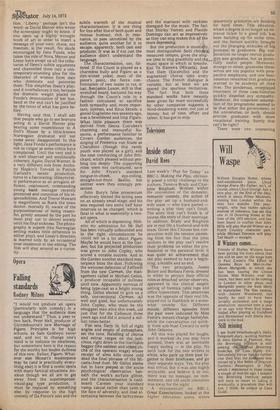 Live and Let Die croons Paul McCartney over the credits — but no film mogul in his right mind is going to let 007 breathe his last even if he has to be resurrected in a different bodily form. As the' familiar theme music blares out a new 007 walks into view down the barrel of the telescopic sight at the start of the latest -James Bond spectacular (' A ' Odeon Leicester

Square). Roger Moore has none of

surance tag as high as Betty Grable's legs once did, and he can't afford to get knocked around carrying .a property like that on his shoulders — but he does fit slickly into the director's presentation of Bond as a lethal comedian let loose in a world of thuggish buffoons who are a little slower on the punch-lines. As a matter of fact, Guy Hamilton, after two mediocre films, has brought the Ian Fleming sequence back into top gear with as fastpaced and snappily entertaining a piece of claptrap as we have a right to expect.

All the usual ingredients turn up, to be driven to destruction or distraction in the wake of 007's headlong and immaculate passage. Scantily but never immodestly dressed maidens are delightfully imperilled; swarthy villains die with identical expression of faint surprise; out of the tinfoil of crumpled automobiles crawl dazed and awestruck sheriffs; speedboats become aeroplanes; aeroplanes become bulldozers; the jaws of snakes, sharks, alligators and crocodiles open and snap shut; and the quest for the heavy of heavies leads as always to the underground powerhouse in which all fantasies are exploded. One description will serve for all. Bond, escaping with Solitaire in a Caribbean omnibus from a heroin tycoon, turns down a road with a low bridge ahead. Mr Big's henchmen, giving chase in a fast sedan, .snarl with anticipation. Bond puts his foot down on the accelerator 'The bridge sheers off the top deck of the bus, the pursuers cannon into it; boxed inside they skid off the road into a village pond. The small boy sitting beside me erupted with joy as Bond made. yet another getaway.

A few Fleming fans will no doubt regret that the films now have to be played strictly for the gags and special effects: but at this distance from the books it is the least incongruous approach. Tom Mankiewicz has changed the original story very considerably to fit in with the latest tastes. Apart from Bond himself, the only character recognisably close to Fleming's originals is Tee Hee played by the formidable Julius Harris, familiar as the hood behind the scenes in numerous black gangster films. But what is retained is the primal appeal of the Bond stories — identical to the appeal of Chinese films like The OneArmed Swordsman and The OneArmed Boxer currently attracting enormous audiences in Britain and America — the appeal of a solitary individual fighting against previously impossible odds and braving previously unimaginable situations to defeat an all-powerful enemy, and then returning from the tourney like Sir Lancelot as solitary as when he entered it.

Rather more important liberties have been taken with Ibsen's A Doll's House (' A ' Odeon St Martin's Lane) in Joe Losey's produc tion. ' Liberty ' perhaps isn't the word: as David Mercer who wrote the screenplay ought to know, if you open up a highly wrought work of art in order to insert a message of your own, chaos, not freedom, is the result. No doubt encouraged by Jane Fonda, who takes the role of Nora, Mercer and Losey have swept up all the tributaries of Ibsen's subtle arguments and channelled them into a contemporary-sounding plea for the liberation of women from men who dominate and patronise them. This simplifies Ibsen's play; and it overbalances it too, because the dramatic weight placed on Fonda's denunciation of her husband at the end can't be justified by the tenor of what has gone before.

Having said that, I shall add that people who go to see bravura acting in a David Mercer play bearing some resemblance to A Doll's House by a little-known Norwegian dramatist will not come away disappointed. In this light, Jane Fonda's performance is not as vulgar as some critics have complained. Until the very end it is well observed and emotionally coherent. Again, David Warner, in a very different role from Anthony Hopkin's Torvald in Patrick Garland's recent production, turns in a fascinating, idiosyncratic performance as an arrogant, efficient, unpleasant, commanding young bank manager recently promoted and conscious of his responsibilities. And Trevor Howard is magnificent as Rank the town doctor, mortally ill, aware of the purposelessness of being resent.ful, grimly amused by the part he must play out in decent society until his final sickness. The photography is superb (the Norwegian setting makes little difference to either play), and Losey's direction, Is marred only by an occasional aver-insistence in the editing. The film will stay around as a curiosity.