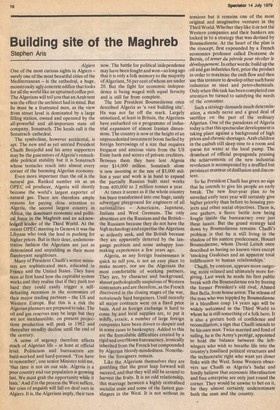 Building site of the Maghreb

Algiers One of the most curious sights in Algiers — surely one of the most beautiful cities of the Mediterranean — is the cathedral, a huge, monstrously ugly concrete edifice that looks for all the world like an upturned coffee pot. The Algerians will tell you that an Arab tent was the effect the architect had in mind. But he must be a frustrated man, as the view from street level is dominated by a large filling station, owned and operated by the all-powerful and all-important state oil company, Sonatrach. The locals call it the Sonatrach cathedral.

The symbolism, however accidental, is apt. The new and as yet untried President Chadli Benjedid and his army supporters may be the guarantors of Algeria's remarkable political stability but it is Sonatrach whose tentacles reach into almost every corner of the booming Algerian economy.

Even more important than the oil is the natural gas. Ranked number six as an OPEC oil producer, Algeria will shortly become the world's largest exporter of natural gas. There are therefore ample reasons for paying close attention to Algeria, the second largest country in Africa, the dominant economic and political force in the Maghreb and an acknowledged leader of the Third World. At the recent OPEC Meeting in Geneva it was the Libyans who took the lead in pushing for higher prices. But in their dour, undemonstrative fashion the Algerians are just as determined and unyielding as their more flamboyant neighbours.

Many of President Chadli's senior ministers are sophisticated men, educated in France and the United States. They have seen at first hand how the capitalist system works and they realise that if they push too hard they could easily trigger a selfdefeating recession in the economies of their major trading partners — the US and Western Europe. But this is a risk the Algerian planners are prepared to take. The oil and gas reserves may be large but they are not inexhaustible: on present projections production will peak in 1982 and thereafter steadily decline until the end of the century.

A sense of urgency therefore affects much of Algerian life — at least at official level. Politicians and bureaucrats are hard-worked and hard-pressed. 'You have to remember', one senior Minister told me, 'that time is not on our side. Algeria is a poor country and our population is growing fast. We must grab the opportunity while it lasts.' And if in the process the West suffers, her cries of anguish will fall on deaf ears in Algiers. It is, the Algerians imply, their turn now. The battle for political independence may have been fought and won —so long ago that it is only a folk memory to the majority of Algerians, 56 per cent of whom are under 20. But the fight for economic independence is being waged with equal ferocity and is still far from complete.

The late President Boumedienne once described Algeria as 'a vast building site'. He was not far off the mark. Largely unnoticed, at least in Britain, the Algerians have embarked on a programme of industrial expansion of almost Iranian dimensions. The country is now at the height of an unprecedented investment boom fuelled by foreign borrowings of a size that requires frequent and anxious visits from the US Exim bank and scores of private creditors. Between them they have lent Algeria over $14,000 million. Sonatrach alone is now investing at the rate of $3,000 million a year and work is in hand to expand the partially Russian built steel works from 400,000 to 2 million tonnes a year At times it seems as if the whole country has been transformed into one huge, sandy adventure playground for engineers of all nationalities — Americans, Japanese, Italians and West Germans. The only absentees are the Russians and the British— the Russians because they do not have the high technology and expertise the Algerians so ardently seek, and the British because they are apparently deterred by the language problem and some unhappy lossmaking experiences a few years ago.

Algeria, as any foreign businessman is quick to tell you, is not an easy place to make money, nor are the Algerians the most comfortable of working partners. They are, by character and background, almost pathologically suspicious of Western contractors and are therefore, as the French discovered in the closing stages of the war, notoriously hard bargainers. Until recently all major contracts were on a fixed price basis. And as foreign exchange is hard to come by, and local supplies are, to put it mildly, erratic, a number of large foreign companies have been driven to despair and in some cases to bankruptcy. Added to this are the formidable difficulties created by a rigid and overblown bureaucracy, ironically inherited from the French but compounded by Algerian bloody-mindedness. Nonetheless the foreigners remain.

Like the Algerians themselves they are gambling that the great leap forward will succeed, and that they will still be around to harvest the fruits. It is an odd relationship, this marriage between a highly centralised socialist state and some of the fastest gunslingers in the West. It is not without its tensions but it remains one of the most original and imaginative ventures in the Third World. Whether they like it or not the Western companies and their bankers are locked in to a strategy that was devised by Boumedienne. At the heart of the plan is the concept, first expounded by a French economics professor called Destanne de Bemis, of semer du petrole pour recoher le developpement. In other words: build up the oil and gas industries first, price the product in order to maximise the cash flow and then use this treasure to develop other such basic industries as steel and petro-chemicals. Only when this task has been corn pleted can attention be turned to satisfying the needs of the consumer.

Such a strategy demands much determination, a steady nerve and a good deal of sacrifice on the part of the ordinary Algerian. One of the paradoxes of Algeria today is that this spectacular development is taking place against a background of high prices and chronic shortages. Arab children in the casbah still sleep nine to a room and queue for water at the local pump. The drumbeat of official propaganda praising the achievements of the new industrial revolution is accompanied by a muffled but persistent murmur of disillusion and discontent.

So far President Chadli has given no sign that he intends to give his people an early break. The new four-year plan to be unveiled early next year will certainly give higher priority than before to housing projects and other social objectives. There is, one gathers, a fierce battle now being fought inside the bureaucracy over just these issues. But the grand strategy laid down by Boumedienne remains. Chadli's problem is that he is still living in the shadow of his austere predecessor, Houari Boumedienne, whom David Leitch once described as having no known vices except 'smoking Gauloises and an apparent total indifference to human relationships.'

Chadli, by contrast, appears more outgoing, more relaxed and ultimately more forgiving. Last week he made his first public break with the Boumedienne era by freeing the former President's old rival, Ahmed Ben Bella, from house arrest. The release of the man who was toppled by Boumedienne in a bloodless coup 14 years ago will be widely welcomed in the Third World to whom he is still something of a folk hero. It is also a gesture both of confidence and reconciliation; a sign that Chadli intends to be his own man. Twice married and fond of sailing, he is the Army's protégé, appointed to hold the balance between the leftwingers who wish to breathe life into the country's fossilised political structures and the technocratic right who want yet closer links with the West. Some Western observers see Chadli as Algeria's Sadat and fondly believe that economic liberalisation and free enterprise are only just round the corner. They would be unwise to bet on it, for they almost certainly underestimate both the man and the country.