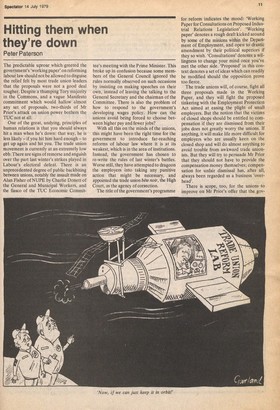 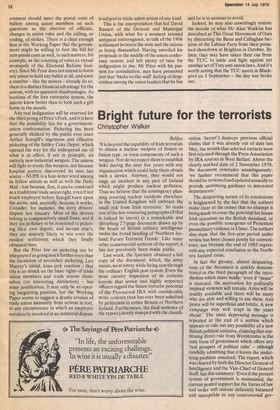 Hitting them when they're down

The predictable uproar which greeted the government's 'working paper' on reforming labour law should not be allowed to disguise the relief felt by most trade union leaders that the proposals were not a good deal tougher. Despite a thumping Tory majority in the Commons, and a vague Manifesto commitment which would hallow almost any set of proposals, two-thirds of Mr Prior's attack on union power bothers the TUC not at all.

One of the great, undying, principles of human relations is that you should always hit a man when he's down: that way, he is less likely — if you hit him hard enough — to get up again and hit you. The trade union movement is currently at an extremely low ebb. There are signs of remorse and anguish over the part last winter's strikes played in Labour's electoral defeat. There is an unprecedented degree of public backbiting between unions, notably the assault made on Alan Fisher of NUPE by Charlie Donett of the General and Municipal Workers, and the fiasco of the TUC Economic Commit tee's meeting with the Prime Minister. This broke up in confusion because some members of the General Council ignored the rules normally observed on such occasions by insisting on making speeches on their own, instead of leaving the talking to the General Secretary and the chairman of the Committee. There is also the problem of how to respond to the government's developing wages policy. How can the unions avoid being forced to choose between higher pay and fewer jobs?

With all this on the minds of the unions, this might have been the right time for the government to introduce far-reaching reforms of labour law where it is at its weakest, which is in the area of institutions. Instead, the government has chosen to re-write the rules of last winter's battles. Worse still, they have attempted to dragoon the employers into taking any punitive action that might be necessary, and appointed the trade union bete noir, the High Court, as the agency of corFection.

The title of the government's programme for reform indicates the mood: 'Working Paper for Consultations on Proposed Industrial Relations Legislation'. 'Working paper' denotes a rough draft kicked around by some of the minions Within the Department of Employment, and open to drastic amendment by their political superiors if they so wish. 'Consultations' denotes a willingness to change your mind once you've met the other side. 'Proposed' in this context denotes a set of ideas which can readily be modified should the opposition prove too fierce.

The trade unions will, of course, fight all three proposals made in the Working Paper, and they will fight the proposed tinkering with the Employment Protection Act aimed at easing the plight of small employers. But the notion that the victims of closed shops should be entitled to compensation if they are dismissed from their jobs does not greatly worry the unions. If anything, it will make life more difficult for employers who are usually keen on the closed shop and will do almost anything to avoid trouble from awkward trade unionists. But they will try to persuade Mr Prior that they should not have to provide the compensation money themselves; compensation for unfair dismissal has, after all, always been regarded as a business 'overhead'.

There is scope, too, for the unions to improve on Mr Prior's offer that the gov ernment should meet the postal costs of ballots among union members on such questions as the election of officials, changes in union rules and the calling, or ending, of strikes. There is a clear enough hint in the Working Paper that the government might be willing to foot the bill for non-postal costs as well, in such matters, for example, as the counting of votes (a virtual monopoly of the Electoral Reform Society). Since Mr Prior does not intend to force any union to hold any ballot at all, and since a number — like the miners — already do so, there is a distinct financial advantage for the unions, with no apparent disadvantages. As bastions of the free enterprise system, the unions know better than to look such a gift horse in the mouth.

Any real indignation will be reserved for the third prong of Prior's Fork, and it is here that the possibility lies for a governmentunion confrontation. Picketing has been generally disliked by the public ever since Arthur Scargill's ingenious and effective picketing of the Saldey Coke Depot, which opened the way for the widespread use of what is in effect, if not in principle, an entirely new industrial weapon. The unions will fight to retain this weapon, not because hospital porters discovered its uses last winter — NUPE is a four-letter word among its fellow unions as well as with the Daily Mail— but because, first, it can be construed as a traditional trade union right, even if not much employed before Scargill burst upon the scene, and, secondly, because it works. Consider, for instance, the lorry drivers' dispute last January. Most of the drivers belong to comparatively small firms, and if they are in future to be restricted to picketing their own depots, and no-one else's, they are scarcely likely to win even the modest settlement which they finally obtained then.

But the Prior law on picketing can be interpreted as going much further even than the limitation of secondary picketing. Len Murray's initial, knee-jerk reaction — that this is an attack on the basic rights of trade union members and trade unions themselves (an interesting distinction) — has some justification. It may only be an opening bargaining position, but the Working Paper seems to suggest a drastic erosion of trade union immunity from actions in tort, in any circumstance in which an employer not directly involved in an industrial dispute is subject to trade union action of any kind.

This is the interpretation that led David Basnett of the General and Municipal Union, with what for a moment seemed untypical extravagance, to talk of the 1906 settlement between the state and the unions as being dismantled. Having unveiled his proposals in the middle of the union conference season, and left plenty of time for indignation to rise, Mr Prior with his passion for consultation, may have promoted just that 'backs-to-the-wall' feeling of desperation among the union leaders that he has said he is so anxious to avoid.

Indeed, he may also unwittingly restore the morale of what Mr Alan Watkins has described as This Great Movement of Ours by distracting the Benn and Callaghan factions of the Labour Party from their promised showdown at Brighton in October. By then, they may have taken their cue from the TUC, to unite and fight against yet another set of Tory anti-union laws. And it's worth noting that the TUC meets in Blackpool on 3 September — the day war broke out.