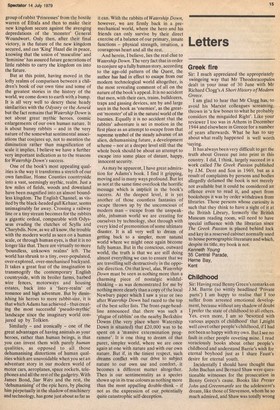 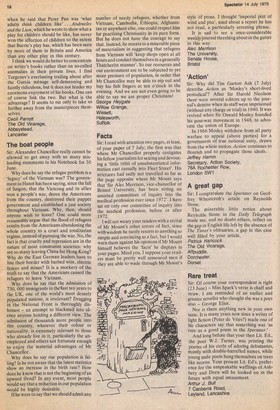 Sir: Having read Benny Green's remarks on J.M. Barrie (so wittily headlined 'Private parts') I am happy to realise that I too suffer from arrested emotional development, because without any shadow of doubt I prefer the state of childhood to all others. Yes, even more, I am so 'besotted with various aspects of childhood' that I .might well covet other people's childhood, if I had not been so happy with my own. But! see no fault in other people coveting mine. I read voraciously books about other people's childhood and understand Barrie's wish for eternal boyhood just as I share Faust's desire for eternal youth, Incidentally I should have thought that John Buchan and Bernard Shaw were questionable witnesses for the prosecution in Benny Green's cause. Books like Prester John and Greenmantle are the adolescent's dream, like those of Stevenson, whom he so much admired, and Shaw was totally wrong when he said that Peter Pan was 'what adults think children like' . . . Androcles and the Lion, which he wrote to show what a play for children should be like, has never won the affection of children to the extent that Barrie's play has, which has been seen by more of them in Britain and America than any other play in this century.

I think we would do better to concentrate on writer's books rather than on so-called anomalies in their private lives, I find Turgenev's everlasting trailing about after the Garcia ménage self-demeaning and faintly ridiculous, but it does not hinder my enormous enjoyment of his books. One can of course link the two. But what is the advantage? It seems to me only to take us further away from the masterpieces themselves.