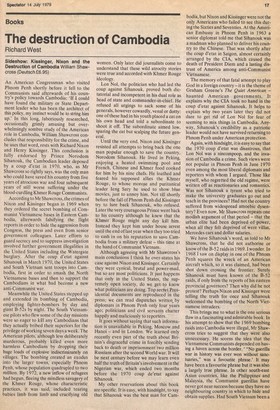 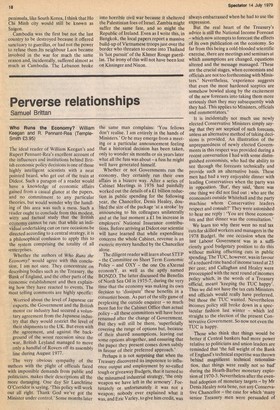 The destruction of Cambodia

Sideshow: Kissinger, Nixon and the Destruction of Cambodia William Shawcross (Deutsch £6.95) An American Congressman who visited Phnom Penh shortly before it fell to the Communists said afterwards of his country'spolicy towards Cambodia; 'If I could have found the military or State Department leader who has been the architect of this policy, my instinct would be to string him up.' In this long, laboriously researched, occasionally grimly amusing but overwhelmingly sombre study of the American role in Cambodia, William Shawcross concludes that responsibility for the crime, and he uses that word, rests with Richard Nixon and Henry Kissinger. This conclusion is fully endorsed by Prince Norodom Sihanouk, the Cambodian leader deposed by a coup d'etat in 1970, who, as Mr Shawcross so rightly says, was the only man who could have saved his country from five years of atrocious war and four subsequent years of still worse suffering under the blood-curdling Khmer Rouge Communists.

According to Mr Shawcross, the crimes of Nixon and Kissinger began in 1969 when they ordered the secret bombing of Communist Vietnamese bases in Eastern Cambodia, afterwards falsifying the flight reports in order to hide the aggression from Congress, the press and even from senior government colleagues. Later efforts to guard secrecy and to suppress investigation involved further government illegalities in the United States including the Watergate burglary. After the coup d'etat against Sihanouk in March 1970, the United States and South Vietnam sent troops into Cambodia, first in order to smash the North Vietnamese bases and then to support the Cambodians in what had become a new anti-Communist war.

Meanwhile the United States stepped up and extended its bombing of Cambodia, employing fighter-bombers by day and giant B-52s by night. The South Vietnamese pilots who flew some of the day missions were so eager to kill any Cambodians that they actually bribed their superiors for the privilege of working seven days,a week. The American pilots; although less deliberately murderous, probably killed even more harmless Cambodians by dropping their huge loads of explosive indiscriminately on villages. The bombing created an exodus into the larger towns, especially Phnom Penh, whose population quadrupled to two million. By 1972, a new inflow of refugees had begun, fleeing the mindless savagery of the Khmer Rouge, whose characteristic practices, it was said, included tearing babies limb from limb and crucifying old women. Only later did journalists come to understand that these wild atrocity stories were true and accorded with Khmer Rouge ideology.

Lon Nol, the politician who had led the coup against Sihanouk, proved both dictatorial and incompetent in his dual role as head of state and commander-in-chief. He refused all urgings to sack some of his generals, however cowardly, venal or dotty: one of these had in his youth placed a cat on his own head and told a subordinate to shoot it off. The subordinate aimed low, sparing the cat but scalping the future general.

Until the very end, Nixon and Kissinger resisted all attempts to bring back the one man popular enough to save the country, Norodom Sihanouk. He lived in Peking, enjoying a heated swimming pool and French, Chinese and Khmer food cooked for him by his nine chefs. He loathed and feared his supposed allies the Khmer Rouge, to whose morose and puritanical leader leng Sary he used to show blue movies, just to annoy him. Not till shortly before the fall of Phnom Penh did Kissinger try to lure back Sihanouk, who refused. Later the very courageous Prince went back to his country although he knew that the Khmer Rouge might any day kill him. Instead they kept him under house arrest until the end of last year when they too tried to cash in on his reputation to save Cambodia from a military defeat — this time at the hand of Communist Vietnam.

Although agreeing with Mr Shawcross's main conclusions I think he over-states his case against Nixon and Kissinger. Certainly they were cynical, brutal and power-mad, but so are most politicians. It just happens that only in the United States, the supremely open society, do we get to know what politicians are doing. Top secret Presidential documents are reproduced in the press; we can read dispatches written, by diplomats in Phnom Penh only four years ago; politicians and civil servants chatter happily and maliciously to reporters.

It goes without saying that such information is unavailable in Peking, Moscow and Hanoi — and in London. We learned only recently even part of the truth about Britain's disgraceful crime in forcibly sending back to death or imprisonment two million Russians after the second World war. It will be next century before we may learn even half the truth of Britain's involvement in the Nigerian war, which ended two months before the 1970 coup de'etat against Sihanouk.

My other reservations about this book are specific. It is easy, with hindsight, to say that Sihanouk was the best man for Cam bodia, but Nixon and Kissinger were not the only Americans who failed to see this during the Sixties and Seventies. At the American Embassy in Phnom Penh in 1963 a senior diplomat told me that Sihanouk was a madman who planned to deliver his country to the Chinese. That was shortly after the coup d'etat in Saigon, almost certainly arranged by the CIA, which caused the death of President Diem and a lasting distrust of America among anti-Communist Vietnamese.

The memory of that fatal attempt to play God in a foreign country — it is the theme of Graham Greene's The Quiet American — haunted American governments. It explains why the CIA took no hand in the coup d'etat against Sihanouk. It helps to explain why two years later they did not dare to get rid of Lon Nol for fear of seeming to mix things in Cambodia. Anyway, Sihanouk's credibility as a patriotic leader would not have survived returning to Phnom Penh under American protection.

Again, with hindsight, it is easy to say that the 1970 coup d'etat was disastrous, that Lon Nol was a nincompoop, and the invasion of Cambodia a crime. Such views were not popular in Phnom Penh in June 1970 even among the most liberal diplomats and reporters with whom I argued. Those like myself, who regretted the old regime, were written off as reactionaries and romantics. Was not Sihanouk a tyrant who tried to make the university graduates go out and teach in the provinces? Had not the country suffered from widespread amoebic dysentery? Even now, Mr Shawcross repeats one modish argument of that period — that the urban elite had been deprived of power, when all they felt deprived of were villas, Mercedes cars and dollar salaries.

We have Sihanouk's word, as told to Mr Shawcross, that he did not authorise or know of the B-52 raids in 1969.1 wonder. In 1968 I saw on display in one of the Phnom Penh squares the wreck of an American aircraft which, so it was claimed, had been shot down crossing the frontier. Surely Sihanouk must have known of the B-52 raids, if only from the reports of his eastern provincial governors? Then why did he not protest? Perhaps Nixon and Kissinger were telling the truth for once and Sihanouk welcomed the bombing of the North Vietnamese intruders.

This brings me to what is the one serious flaw in a fascinating and admirable book. In his attempt to show that the 1969 bombing raids into Cambodia were illegal, Mr Shawcross tries to suggest that they were also unnecessary. He scorns the idea that the Vietnamese Communists depended on having a haven across the border. '"No guerilla war in history was ever won without sanctuaries," was a favourite phrase.' It may have been a favourite phrase but it was also a largely true phrase. In other south-east Asian countries, like the Philippines and Malaysia, the Communist guerillas have never got near success because they have no neighbouring country in which to hide and obtain supplies. Had South Vietnam been a peninsula, like South Korea, I think that Ho Chi Minh city would still be known as Saigon.

Cambodia was the first but not the last country to be destroyed because it offered sanctuary to guerillas, or had not the power to refuse them Its neighbour Laos became involved in the war for much the same reason and, incidentally, suffered almost as much as Cambodia, The Lebanon broke into horrible civil war because it sheltered the Palestinian foes of Israel. Zambia might suffer the same fate, and so might the Republic of Ireland. Even as I write this, in Bangkok, the local papers report a massive build-up of Vietnamese troops just over the border who threaten to come into Thailand in shot pursuit' of the Khmer Rouge guerillas. The irony of this will not have been lost on Kissinger and Nixon.