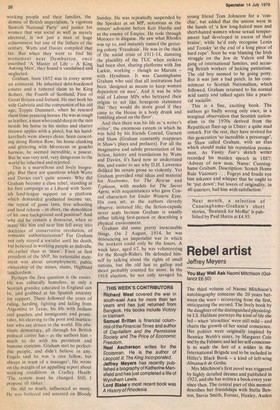 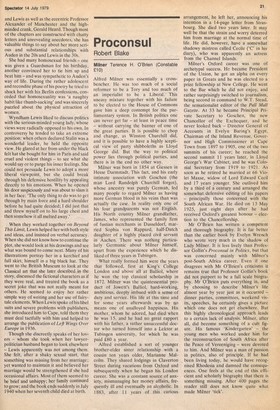 You May Well Ask Naomi Mitchison (Gollancz E6.50) The third volume of Naomi Mitchison's autobiography concerns the 20 years between the wars — recovering from the first, anticipating the second. The lively book by the daughter of the distinguished physiologist J.S. Haldane portrays the kind of life she led — when 'atrocities' were still mild — and charts the growth of her social conscience. Her politics were originally inspired by Beatrice Webb's sister, by Margaret Cole and by the Fabians; and led her self-consciously to wash the feet of a soldier in the International Brigade and to be included in Hitler's Black Book — a kind of left-wing Almanach de Gotha.

Mrs Mitchison's first novel was triggered by highly detailed dreams and published in 1923, and she has written a book every year since then. The central part of this memoir describes her friendships with Stella Benson, Stevie Smith, Forster, Huxley, Auden and Lewis as well as the eccentric Professor Alexander of Manchester and the highminded crank, Gerald Heard. Though most of the chapters are constructed with chatty letters and unrevealing anecdotes, she has valuable things to say about her more serious and substantial relationships with Auden in the 20s and Lewis in the 30s.

She had many homosexual friends — one was given a Guardsman for his birthday, another convinced her to tie him up and beat him — and was sympathetic to Auden's way of life. During the rather adolescent and recondite phase of his poetry he tried to shock her with his Berlin confessions, conceded that homosexuality was 'a naughty habit like thumb-sucking' and was sincerely puzzled about the physical attraction of women.

Wyndham Lewis liked to discuss politics with the serious-minded young lady, whose views were radically opposed to his own. In controversy he tended to take an extreme position: when others declared Stalin was a wonderful leader, he held the opposite view. He glared at her from under the black felt hat she bought for him in Paris and said cruel and violent things — to see what she would say or to purge his inner feelings. She could not persuade Lewis to adopt a more liberal viewpoint, but she could break through his defensive hostility by appealing directly to his emotions. When he opened his door suspiciously and was about to slam it in her face: 'The only thing to do was to get through by main force and a hard shoulder before he had quite decided; I did just that and threw myself on to his large chest and then somehow it all melted away,'' When they worked together on Beyond This. Limit, Lewis helped her with both style and ideas, and insisted on verbal accuracy. When she did not know how to continue the plot, she would look at his drawings and see what was bound to come next. Many of his illustrations portray her in a kerchief and full skirt, himself in a big black hat. They went to the British Museum to look at the Classical art that she later described in the story, discussed the fictional characters as if they were real, and treated the book as a secret joke that was not really meant for others. He seemed to enjoy her rather simple way of writing and her use of fairytale elements. When Lewis spoke of his libel suits and severe problems with publishers, she introduced him to Cape, told them they must deal tactfully with him and helped to arrange the publication of Left Wings Over Europe in 1936.

Though she discreetly speaks of her lovers — whom she took when her lawyerpolitician husband began to look elsewhere — Lewis apparently was not among them. She felt, after a shaky sexual start, that something was missing from her marriage; yet wanted to maintain it and believed her marriage would be strengthened if she had occasional affairs. Most of them seemed to be brief and unhappy; her family continued to grow; and the book ends suddenly in July 1940 when her seventh child died at birth.