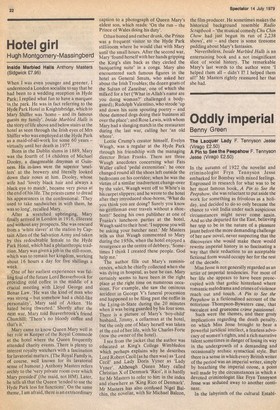 Inside Marbled Halls Anthony Masters (Sidgwick £7.95) When I was even younger and greener, I understood a London socialite to say that he had been to a wedding reception in Hyde Park; I replied what fun to have a marquee in the park. He was in fact referring to the Hyde Park Hotel in Knightsbridge, which to Mary Shiffer was 'home — and its famous guests my family'. Inside Marbled Halls is the story of life above and below stairs at the hotel as seen through the Irish eyes of Mrs Shiffer who was employed at the Hyde Park as a maid-of-all-work for some 60 years — virtually until her death in 1977.

Born in the Dublin slums in 1889, Mary was the fourth of 14 children of Michael Dooley, a disagreeable drayman at Guinness. His in-laws were the superior `smellers' at the brewery and literally looked down their noses at him. Dooley, whose wife had 'lovely black hair and always a black eye to match', became very pious at the end of his life. The priests came to dread his appearances in the confessional: 'They used to take sandwiches in with them, he was so long', recalled Mary.

After a wretched upbringing, Mary finally arrived in London in 1916, illiterate and without any prospects. She was rescued from a 'white slaver' at the station by Captain Allen of the Salvation Army and taken by this redoubtable female to the Hyde Park Hotel, which had a philanthropic tradition. Mary was given a job in the still-room, which was to remain her kingdom, working about 16 hours a day for five shillings a week.

One of her earliest experiences was falling foul of the future Lord Beaverbrook for providing cold coffee in the middle of a crucial meeting with Lloyd George and Bonar Law. 'He was the kind of man who was strong — but somehow had a child-like personality', Mary said of Aitken. 'He hated being thwarted.' Shortly after the next war, Mary told Beaverbrook's friend Churchill: 'There's no bloody coffee and that's it.'

Mary came to know Queen Mary well in her role as Keeper of the Royal Commode at the hotel where the Queen frequently attended charity events. There is plenty to interest royalty watchers with a fascination for lavatorial matters. (The Royal Family is, of course, well known for its lavatorial sense of humour.) Anthony Masters refers archly to the 'very private room over which Mary presided' ,(the maid, not HM). Later, he tells tit that the Queen 'tended to use the Hyde Park less for functions'. On the same theme, I am afraid, there is an extraordinary caption to a photograph of Queen Mary's eldest son, which reads: 'On the run — the Prince of Wales doing his duty'.

Often bored and rather drunk, the Prince was a frequent visitor to the Hyde Park still-room where he would chat with Mary until the small hours. After the second war, Mary 'found herself with her hands gripping the King's slim back as they circled the banqueting suite' in a conga. Mary also encountered such famous figures in the hotel as General Smuts, who asked her about the Irish Troubles; the dozen goats of the Sultan of Zanzibar, one of which she milked for a bet (What in Allah's name are you doing woman?' challenged a bodyguard); Rudolph Valentino, who strode `up and down his suite spouting poetry — and those damned dogs doing their business all over the place'; and Rose Lewis, with whom Mary had a slanging match in the restaurant during the last war, calling her `an old whore'.

Lottie Crump's creator himself, Evelyn Waugh, was a regular at the Hyde Park through his friendship with the managing director Brian Franks. There are three Waugh anecdotes concerning what Fats Waller called 'pedal extremities': he once changed round all the shoes left outside the bedrooms on his corridor; when he was the victim of a similar inadvertent change-over by the valet, Waugh went off to White's in his carpet slippers; and he wrote to the hotel after they introduced shoe-horns, 'What do you think you are doing? Surely you know no gentleman ever travels without a shoehorn!' Seeing his own publisher at one of Franks's luncheon parties at the hotel, Waugh said to their host: 'I suppose you will be asking your butcher next.' Mr Masters tells us that Waugh commented to Mary during the 1950s, when the hotel enjoyed a resurgence as the centre of debbery, 'Sometimes I think I created these people. God help me.' The author fills out Mary's reminiscences, which he chiefly collected when she was dying in hospital, as best he can. Mary certainly seems to have been in the right place at the right time on numerous occasions. For example, she saw the ominous accident in George V's funeral procession and happened to be filing past the coffin in the Lying-in-State during the 20 minutes when it was being guarded by his four sons. There is a picture of Mary's 'boy-child' husband, Jimmy, a cellarman at the hotel, but the only one of Mary herself was taken at the end of her life, with Sir Charles Forte (now the owner of the hotel).

I see from the jacket that the author was educated at King's College Wimbledon which perhaps explains why he describes Lord Robert Cecil (as he then was) as 'Lord Cecil' and Lady Doris Vyner as 'Lady Vyner'. Although Queen Mary called Christian X of Denmark 'Rico', it is hardly for Mr Masters to refer to him in the index and elsewhere as 'King Rico of Denmark'. Mr Masters has also confused Nigel Balchin, the novelist, with Sir Michael Balcon, the film producer. He sometimes makes the historical background resemble Radio Scrapbook — 'the musical comedy Chu Chin Chow had just begun its run of 2,238 shows', etc — and there is some tiresome padding about Mary's fantasies.

Nevertheless, Inside Marbled Halls is an entertaining book and a not insignificant slice of social history. The remarkable Mary's last words to the author were 'I helped them all — didn't I? I helped them all!' Mr Masters rightly reassured her that she had.