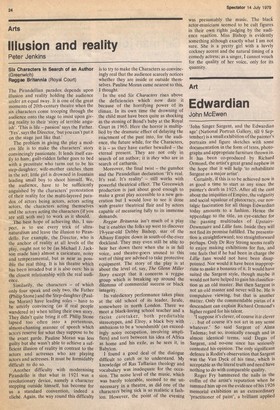 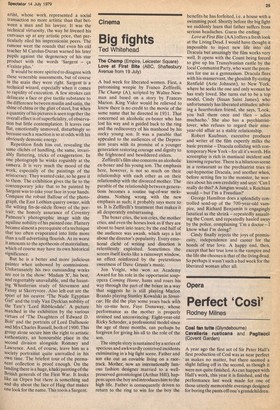 'John Singer Sargent, and the Edwardian age' (National Portrait Gallery, till 9 September) is a small exhibition of the painter's portraits and figure sketches with some documentation in the form of texts, photographs and appropriate furniture thrown in. It has been co-produced by Richard Ormond, the artist's great grand nephew in the hope that it will help `to rehabilitate Sargent as a major artist'.

Certainly, if this is to be achieved now is as good a time to start as any since the painter's death in 1925. After all the cant about the iniquities of Empire, the vulgarity and social squalour of plutocracy, our nostalgic fascination for all things Edwardian today amounts to a fashion. Hence the appendage to the title, an eye-catcher for the passing multitudes of UpstairsDownstairs and Lillie fans. Inside they will not find its promise fulfilled. The presentation is straightforward; too straightforward perhaps. Only Dr Roy Strong seems really to enjoy making exhibitions for fun, and one feels that if he had been in charge the Lillie fans would not have been disappointed. Nor would it have been inappropriate to make a bonanza of it. It would have suited the Sargent style, though maybe it would not have helped to gain his classification as an old master. But then Sargent is not an old master and never will be. He is compulsive viewing, but that is another matter. Only the commendable pietas of a descendant can explain Richard Ormond's higher regard for his talent.

'I suppose it's clever, of course it is clever . but of course it's not art in any sense whatever.' So said Sargent of Alma Tadema; but so, ironically enough and in almost identical terms, said Degas of Sargent, and no-one since has seriously contested his opinion. The only significant defence is Rodin's observation that Sargent was the Van Dyck of his time, which is acceptable as the literal truth and need have nothing to do with comparable quality.

Roger Fry hammered the nails in the coffin of the artist's reputation when he summed him up on the evidence of his 1926 memorial exhibition as an extraordinary 'practitioner of paint', a brilliant applied artist, whose work represented a social transaction no more artistic than that between a than and his lawyer. It was the technical virtuosity, the way he livened his canvases up at any artistic price, that particularly riled his impressionist peers. The rumour went the rounds that even his old teacher M Carolus-Duran warned his later' pupils against the degeneracy of his star product with the words 'Sargent — ga n'existe plus.'

It would be more spirited to disagree with these venerable assessments, but of course in the main they were right. Sargent is a technical wizard, especially when it comes to rapidity of execution. A few strokes can delineate a face or give tactile substance to the difference between muslin and satin, the shine of china or the glint of steel, but when a quantity of his pictures is seen together the overall effect is of superficiality, of observation but little contemplation. It leaves one flat, emotionally unmoved, disturbingly so because such a reaction is so at odds with his obviously demonic energy.

Repetition finds him out, revealing the same cliches of handling, the same, invariably flattering, tricks of exaggeration. In one photograph he winks roguishly at the camera. It is very much the mood of the work, especially of the paintings of the aristocracy. They wanted cake, so he gave it to them. The exhibition gives the lie to the contemporary joke that to be painted by Sargent was to take your face in your hands. Compare the robust Balfour of the photograph, the East Lothian quarry owner, with the wilting fin-de-siecle flower of the portrait; the homely assurance of Coventry Fatmore's photographic image with the aquiline nobility of his painted one. Flattery became almost a prerequisite of a technique that too often evaporated into little more than a self-advertising flourish. At its worst It amounts to the apotheosis of materialism, Which of course may have its own historical Significance.

But he is a better and more judicious painter when unbowed by commissions. Unfortunately his two outstanding works are not in the show: 'Madam X', his best, and regrettably unavailable, and the haunting Whistlerian study of Stevenson and Fanny at Skerryvore. Also left out are the sport of his oeuvre 'The Nude Egyptian Girl' and the truly Van Dyckian nobility of the Tate's 'Lord Ribblesdale'. A picture matched in the exhibition by the various virtues of 'The Daughters of Edward D. Boit' and the portraits of Lord Dalhousie and Mrs Charles Russell, both of 1900. This group alone secure him the right to artistic authenticity, an honourable place in the second division alongside Romney and Lawrence. And, of course, leave him as a Society portraitist quite unrivalled in his own time. The briefest tour of the permanent collection is proof enough. On the landing there is a huge, khaki painting of the British generals of the First War. It looks like an Orpen but there is something sad and shy about the face of Haig that makes one look for the name. This too is a Sargent.