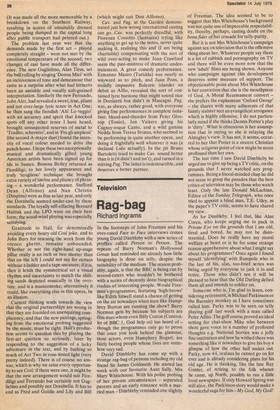 In the footsteps of John Freeman and his over-rated Face to Face interviews comes young David Dimbleby with a new series of profiles called Person to Person. The repeats of Barry Norman's Hollywood Greats had reminded me already how little biography is done on telly, despite the suitability of the medium. The reason probably, again, is that the BBC is being run by second-raters who wouldn't be bothered with a series of decently done biographical studies of interesting people. Would Freeman's programmes, featuring 'high-brows' like Edith Sitwell stand a chance of getting on the air nowadays when men like Humphrey Burton are running the show? Barry Norman gets by because his subjects are film stars whom even Billy Cotton (Controller of BBC 1, God help us) has heard of — though the programmes only go to prove that once you look behind the glamour, most actors, even Humphrey Bogart, are fairly boring people whose lives are somehow very sad. David Dimbleby has come up with a strange rag-bag of persons including my old friend Sir James Goldsmith. He started last week with our favourite Aunt Sally, Mrs Mary Whitehouse. With his polite probing of her private circumstances — separated parents and an early romance with a married man — Dimbleby reminded one slightly of Freeman. The idea seemed to be to suggest that Mrs Whitehouse's background was not quite one of impeccable respectability, thereby, perhaps, casting doubt on the bona fides of her crusade for telly-purity.

But it is not Mrs Whitehouse's campaign against sex on television that is the offensive thing about her. Whatever people say there is a lot of rubbish and pornography on TV and there will be even more now that the new 'adult' films are being shown. Anyone who campaigns against this development deserves some measure of support. The objectionable point about Mrs Whitehouse is her conviction that she is the mouthpiece of God. A Moral Rearmament convert — she prefers the euphemism 'Oxford Group' — she shares with many adherents of that faintly sinister sect an evangelical arrogance which is highly offensive. I do not particularly mind if she thinks Dennis Potter's play is 'dirty'. What is obnoxious is her assumption that in saying so she is relaying the Almighty's view. It has not, it seems, occurred to her that Potter is a sincere Christian whose religious point of view might be more profound than her own.

The last time I saw David Dim bleby he urged me to give up being a TV critic, on the grounds that I never watched any programmes. Being a literal-minded chap he did not seem to grasp the paradox that the best critics of television may be those who watch least. Only the late Donald McLachlan, Editor of the Sunday Telegraph, who once tried to appoint a blind man, T.E. Utley, as the paper's TV critic, seems to have shared my view.

As for Dimbleby, I feel that, like Alan Coren, who keeps urging me to pack in Private Eye on the grounds that I am old, tired and bored, he may not be disinterested. Does he really have my moral welfare at heart or is he for some strange reason apprehensive about what I might say about his programmes? Once again I found myself 'identifying' with Rumpole who in the last of his, alas, too-brief series was being urged by everyone to jack it in and retire. Those who didn't see it will be pleased to hear that the Old Darling defied them all and intends to soldier on.

Someone who is, I'm glad to learn, considering retirement, is Michael Parkinson or the Barnsley monkey as I have sometimes called him. Parky was to be seen on telly playing golf last week with a man called Peter Alliss. The golf course proved an ideal setting for chat-show Mike who between shots gave voice to a number of profound thoughts e.g. National Service was a jolly fine institution and how he wished there was something like it nowadays to give his boy a glimpse of how the other half makes out. Parky, now 44, realises he cannot go on for ever and is already considering plans for his old age. He is thinking, like the late Ray Gunter, of retiring to the folk whence he came, up North, possibly to run a little local newspaper. If only Howard Spring was still alive, the Parkinson story would make a wonderful saga for him —My God, My God!