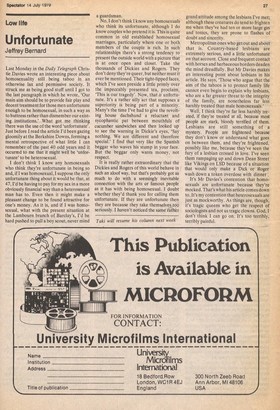 Last Monday in the Daily Telegraph Christie Davies wrote an interesting piece about homosexuality still being taboo in an otherwise lax and permissive society. It struck me as being good stuff until I got to the last paragraph in which he wrote, 'Our main aim should be to provide fair play and decent treatment for those men unfortunate enough to be homosexual, in such a way as to buttress rather than dismember our existing institutions.' What got me thinking there was the use of the word 'unfortunate'. Just before I read the article I'd been gazing gloomily at the Berkshire Downs, forming a mental retrospective of what little I can remember of the past 40 odd years and it occurred to me that it might well be 'unfortunate' to be heterosexual.

I don't think I know any homosexuals who think they're unfortunate in being so and, if I was homosexual, I suppose the only unfortunate thing about it would be that, at 47, I'd be having to pay for my sex in a more obviously financial way than a heterosexual man has to. Even then it might make a pleasant change to be found attractive for one's money. As it is, and if I was homosexual, what with the present situation at the Lambourn branch of Barclay's, I'd be hard pushed to pull a boy scout, never mind a guardsman.

No, I don't think I know any homosexuals who think its unfortunate, although I do know couples who pretend it is. This is quite common in old established homosexual marriages, particularly where one or both members of the couple is rich. In such relationships there's a strong tendency to present the outside world with a picture that is at once open and closet. Take the thousands of Dickies and Rogers. They don't deny they're queer, but neither must it ever be mentioned. Their tight-lipped faces, which I've seen preside a little primly over the impeccably presented tea, proclaim, 'This is our tragedy'. Now, that is unfortunate. It's a rather silly act that supposes a superiority is being part of a minority. Many's the time I've had to give the revolting house dachshund a reluctant and sycophantic pat between mouthfuls of cucumber sandwiches and then looked up to see the warning in Dickie's eyes, 'Say nothing. We are different and therefore special.' I find that very like the Spanish beggar who waves his stump in your face. But the beggar only wants money, not respect.

It is really rather extraordinary that the Dickies and Rogers of this world behave in such an aloof way, but that's probably got as much to do with a seemingly inevitable connection with the arts or famous people as it has with being homosexual. I doubt whether they'd thank you for calling them unfortunate. If they are unfortunate then they are because they take themselves too seriously. I haven't noticed the same rather Taki will resume his column next week grand attitude among the lesbians I've met; although these creatures do tend to frighten me when they've had ten or more large gin and tonics, they are prone to flashes of doubt and sincerity.

Metropolitan ones who get out and about that is. Country-based lesbians are extremely serious, and a little unfortunate on that account. Close and frequent contact with horses and herbaceous borders deaden the mind dreadfully. But Mr Davies makes an interesting point about lesbians in his article. He says, 'Those who argue that the aim of the taboos is to protect family life cannot even begin to explain why lesbians, who are a far greater threat to the integrity of the family, are nonetheless far less harshly treated than male homosexuals.'

Well, I think they're far less harshly treated, if they're treated at all, because most people are stark, bloody terrified of them. Lesbians are still something of a mystery. People are frightened because they don't know or understand what goes on between them, and they're frightened, possibly like me, because they've seen the fury of a lesbian crossed in love. I've seen them rampaging up and down Dean Street like Vikings on LSD because of a situation that would only make a Dick or Roger wash down a token overdose with dinner.

It's Mr Davies's contention that homosexuals are unfortunate because they're mocked. That's what his article comes down to. It's my contention that heterosexuals are just as mockworthy. As things are, though, it's tragic queens who get the respect of sociologists and not us tragic clowns. God, I don't think I can go on. It's too terribly, terribly painful.