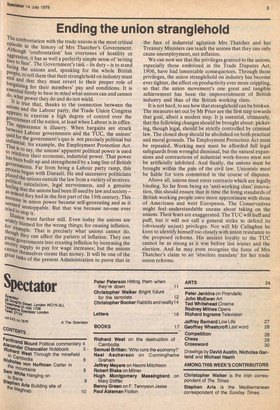 The Confrontation with the trade unions is the most critical episode in the history of Mrs Thatcher's Government. Altho,,nk "1611 'confrontation' has overtones of hostility or aggression, it has as well a perfectly simple sense of 'setting face to face'. The Government's task its duty is to stand facing the unions and, speaking for the whole British People, to tell them that their stranglehold on industry must end and that they must revert to their proper role of bargaining for their members' pay and conditions. It is e.ss"tial firstly to bear in mind what unions can and cannot (1°, what power they do and do not wield. h is true that, thanks to the connection between the "ilts and the Labour party, the Trade Union Congress aPk pears to exercise a high degree of control over the ,rug"ernment of the nation, at least when Labour is in office. bine aPPeara is illusory. When bargains are struck

etwe nce en Labour governments and the TUC, the unions'

9ttid for the government's quo is not precisely political but _industhatrial: for example, the Employment Protection Act. is to say, the unions' apparent political power is used hua raseinforce their economic, industrial power. That power h -een built up and strengthened by a long line of British g"ernments. Far from being a Labour party ramp, this P pirocess began with Disraeli. He and successive politicians aced the unions outside the law from a variety of motives: ling

political calculation, legal nervousness, and a genuine as that the unions had been ill used by law and society

f: .ns Lhdcreas eed they had in the first part of the 19th century. This se

e union power became self-generating and as it

# 7"ted unstoppable. But that was because no-one ever tried to stop it.

went further still. Even today the unions are foldelY blamed for the wrong things; for causing inflation, thou ex,arnple. That is precisely what unions cannot do, `41. gn they can affect the pattern of inflation. They can rmaao lc governments into creating inflation by increasing the ca ileY supply to pay for wage increases; but the unions allot themselves create that money. It will be one of the great tasks of the present Administration to prove that in

the face of industrial agitation Mrs Thatcher and her Treasury Ministers can teach the unions that they can only cause unemployment, not inflation. We can now see that the privileges granted to the unions, especially those enshrined in the Trade Disputes Act, 1906, have had lamentable consequences. Through those privileges, the union stranglehold on industry has become ever tighter, the effect on productivity ever more crippling, so that the union movement's one great and tangible achievement has been the impoverishment of British industry and thus of the British working class. It is not hard, to see how that stranglehold can be broken. The measures set out by Mr Prior are the first step towards that goal, albeit a modest step. It is essential, ultimately, that the following changes should be brought about: picketing, though legal, should be strictly controlled by criminal law. The closed shop should be abolished on both practical and moral grounds. The Employment Protection Act must be repealed. Working men must be afforded full legal safeguards from wrongful dismissal, but the natural expansions and contractions of industrial work-forces must not be artificially inhibited. And finally, the unions must be brought within the pale of the civil law. Unionists must be liable for torts committed in the course of disputes.

Above all, unions must enter contracts which are legally binding. So far from being an 'anti-working class' innovation, this should ensure that in time the living standards of British working people once more approximate with those of Americans and west Europeans. The Conservatives might feel understandable unease about taking on the unions. Their fears are exaggerated. The TUC will huff and puff, but it will not call a general strike to defend its (obviously unjust) privileges. Nor will Mr Callaghan be keen to identify himself too closely with union resistance to the proposed reforms. His ancient loyalty to the TUC cannot be as strong as it was before last winter and the election. And he may even recognise the force of Mrs Thatcher's claim to an 'absolute mandate' for her trade union reforms.