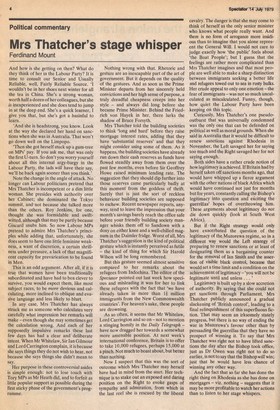 And how is she getting on then? What do they think of her in the Labour Party? It is time to consult our Senior and Usually Reliable, well, Fairly Reliable Source. 'I wouldn't be in her shoes next winter for all the tea in China. She's a strong woman, worth half a dozen of her colleagues, but she is inexperienced and she does tend to jump in at the deep end. She's a quick learner, I give you that, but she's got a basinful to learn.

'And she is headstrong, you know. Look at the way she declared her hand on sanctions when she was in Australia. That won't go down well on the Limpopo.

'Then she got herself stuck up a gum-tree on MPs' pay. If you ask me, that was only the first U-turn. So don't you worry yourself about all this internal argy-bargy in the Labour Party, the lads will have their say, we'll be back again sooner than you think.'

Note the change in the angle of attack. No longer can Labour politicians, pretend that Mrs Thatcher is incompetent or a dim little woman. She presides with authority over her Cabinet; she dominated the Tokyo summit, and not because she talked more than the others. Roy Jenkins, for one, thought she was formidable and swiftwitted, although that may be partly because Giscard snubs him. So now Labour MPs pretend to admire Mrs Thatcher's principles while adding that, unfortunately, she does seem to have one little feminine weakness, a want of discretion, a certain shrillness under pressure, a lack of that magnificent capacity for prevarication to be found in Men.

This is an odd argument. After all, if it is true that women have been traditionally subordinated and have had to box clever to survive, you would expect them, like most subject races, to be more devious and calculating, more inclined to oblique and evasive language and less likely to blurt.

In any case, Mrs Thatcher has always struck me as someone who calculates very carefully what impression her remarks will make — even though she may sometimes get the calculation wrong. And each of her supposedly impulsive remarks these last few days has had a clear and deliberate intent. When Mr Whitelaw, Sir Ian Gilmour and Lord Carrington complain, it is because she says things they do not wish to hear, not because she says things she didn't mean to say.

Her purpose in these controversial asides is simple enough: not to lose touch with Tory MPs as Mr Heath did, and to forfeit as little popular support as possible during the first sticky phase of the government's programme. Nothing wrong with that. Rhetoric and gesture are an inescapable part of the art of government. But it depends on the quality of the gestures. And as soon as the Prime Minister departs from her sincerely held convictions and her high sense of purpose, a truly dreadful cheapness creeps into her style — and always did long before she became Prime Minister. Behind the Friedrich von Hayek in her, there lurks the shadow of Bruce Forsyth.

Mrs Thatcher told the building societies to think long and hard' before they raise mortgage interest rates, adding that they have 'substantial reserves' and that they might consider using some of them. As it happens, the building societies have already run down their cash reserves as funds have flowed steadily away from them over the past few months, even before Sir Geoffrey Howe raised minimum lending rate. The suggestion that they should dip further into those reserves came particularly badly at this moment from the goddess of thrift. Surely that is just the sort of reckless behaviour building societies are supposed to eschew. Recent newspaper reports, anyway, tend to leave the impression that your month's savings barely reach the office safe before your friendly building society manager whisks them off to Sandown with a doxy on either knee and a well-chilled magnum in the Daimler fridge. Worst of all, Mrs Thatcher's suggestion is the kind of political gesture which is instantly perceived as futile — the kind of thing for which Sir Harold Wilson will be long remembered.

But this gesture seemed almost sensitive compared to her remarks about the refugees from Indochina. The editor of the Spectator pointed out last week how specious and misleading it was for her to link these refugees with the fact that 'we have already taken in more than 1.4 million immigrants from the New Commonwealth countries'. For heaven's sake, these people are drowning.

As so often, it seems that Mr Whitelaw, Lord Carrington and so on — not to mention a stinging homily in the Daily Telegraph — have now dragged her towards a somewhat more amenable position. At next week's international conference, Britain is to offer to take 10,000 refugees, perhaps 15,000 at a pinch. Not much to boast about, but better than nothing.

Now I suspect that this was the sort of outcome which Mrs Thatcher may herself have had in mind from the start. Her technique is to stake out an exposed and daring position on the Right to evoke gasps of sympathy and admiration, from which in the last reel she is rescued by the liberal cavalry. The danger is that she may come to think of herself as the only senior minister who knows what people really want. And there is no form of arrogance more insidious than to imagine that you alone represent the General Will. I would not care to judge exactly how `the public' feels about 'the Boat People'; but I guess that the feelings are rather more complicated than Mrs Thatcher imagines and that most people are well able to make a sharp distinction between immigrants seeking a better life and refugees towed out to sea in rusty hulks. Her crude appeal to only one emotion — the fear of immigrants — was not so much uncalculated as miscalculated. Funny, though, how quiet the Labour Party have been keeping on this topic.

Curiously, Mrs Thatcher's one pseudooutburst that was universally condemned was the only one that can be defended on political as well as moral grounds. When she said in Australia that it would be difficult to renew sanctions against Rhodesia in November, the Left savaged her for saying too much and the Right savaged her for not saying enough.

Both sides have a rather crude notion of how legitimacy is achieved. If Britain had by herself taken off sanctions months ago, that would have whipped up a fierce argument with the other nations of black Africa which would have continued not just for months but for years, constantly calling the Bishop's legitimacy into question and eiciting the guerrillas' hopes of overthrowing him. These arguments about legitimacy do not die down quickly (look at South West Africa).

But if the Right strategy would only have exacerbated the question of the legitimacy of the Muzorewa regime, so in a different way would the Left strategy of preparing to renew sanctions or at least of designating them as a bargaining counter for the removal of Ian Stnith and the assertion of visible black control, because that would set a time limit and a condition on the achievement of legitimacy— 'you will not be legitimate until and unless .

Legitimacy is built up by a slow accretion of authority. By saying that she could not get sanctions through Parliament, Mrs Thatcher publicly announced a gradual slackening of 'British control', leading to a final relinquishment of this superfluous fiction. That may seem an irksomely stately progress, but there is no way of ending the war in Muzorewa's favour other than by persuading the guerrillas that they have no prospect of winning it. To say that Mrs Thatcher was right not to have lifted sanctions the day after the Bishop took office, just as Dr Owen was right not to do so earlier, is not to say that the Bishop will win; just that he would have less chance of winning any other way.

And the fact that so far she has done the right thing on Rhodesia as she has done on mortgages — viz. nothing — suggests that it may be more profitable to watch her actions than to listen to her stage whispers.