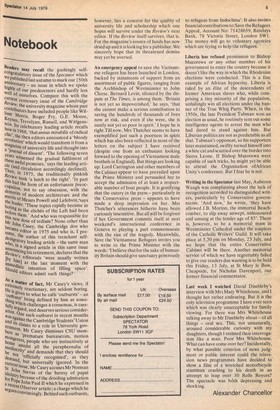 Readers mayrecall the gushingly selfcongratulatory issue of the Spectator which we published last autumn to mark our 150th anniversary — an issue in which we spoke highly of our predecessors and hardly less well of ourselves. Compare this with the current centenary issue of the Cambridge Review, the university magazine whose past contributors have included people like William Morris, Roger Fry, G.E. Moore, Keynes, Trevelyan, Russell, and Wittgenstein. Its celebratory leading article recalls eo‘v Yoe 'that annus mirabilis of radical clue, the then editors announced a 'bloody revolution' which would transform it from a m,Jagazine of university life and thought into a ournal of dissent'. 'The following seven years Witnessed the gradual fulfilment of these awful promises,' says the leading article (and circulation accordingly declined). Then, in Review the traditionally pinkish took 'a lurch to the right'. 'In part this had the form of an unfortunatepreocciluPatIon, not to say obsession, with the merits of modern architecture and the s of Messrs Powell and Lefebvre,'says the leader. 'These topics rapidly became as boring as the cliches of the Left had been before the_ And who was responsible for this ,new dose of tedium? None other than b; 'On Casey, the Cambridge don who ;-carne editor in 1975 and who is, I prefln,e, the author of this trenchant selfuenigratory leading article — the same .man wh°, In a signed article in this same issue Ranno uncing his retirement, declares that the rheview's editorials 'were usually written r, hint] at the last moment with the Should intention of filling space'. editors admit such things? etr y a.enalrlealtter of fact, Mr Casey's views, if n reactionary, are seldom boring. e Is given to what he calls 'outbursts' an tohntburst, being defined by him as some fully i which challenges a consensus, s care..y argued, anon. and deserves serious considerOne such outburst in recent months was aeainst the Cambridge Students' Union Frntnent and its claims to a role in University govbets asMr Casey dismisses CSU mem 'premature bureaucrats, motion 1111.1°11Serers, people who are instinctively at 13111.e amidst all the paraphernalia of edmerity' and demands that they should 2e not 'officially recognised', as they uemand, but universally ignored. In the csurrent issue, Mr Casey accuses Mr Norman St John Stevas of the heresy of papal idolatry because of the drooling admiration for rope John Paul II which he expressed in a recent Observer article; a charge which he ar gues convincingly. Behind such outbursts, however, lies a concern for the quality of university life and scholarship which one hopes will survive under the Review's next editor. If the Review itself survives, that is. For the magazine's source of funds has now dried up and it is looking for a publisher. We sincerely hope that its threatened demise may yet be averted.

An emergency appeal to save the Vietnamese refugees has been launched in London, backed by statements of support from an assortment of public figures, ranging from the Archbishop of Westminster to John Cleese. Bernard Levin, silenced by the dispute at The Times, is among them. 'Britain is not yet so impoverished,' he says, 'that she cannot make a serious contribution to saving the hundreds of thousands of lives now at risk, and even if she were, she is surely not yet so poor in spirit.' I hope he is right.Till now, Mrs Thatcher seems to have exemplified just such a poorness in spirit which has also been reflected in most of the letters on the subject I have received (despite one from an enthusiast looking forward to the opening of Vietnamese male brothels in England). But things are looking up. Lord Carrington and other members of the Cabinet appear to have prevailed upon the Prime Minister and persuaded her to accept the admission of at least a respectable number of boat people. It is gratifying that the outcry in the press — particularly in the Conservative press — appears to have made a deep impression on her, Mrs Thatcher's utterances hitherto have been curiously insensitive. But all will be forgiven if her Government commits itself at next weekend's international conference in Geneva to playing a part commensurate with the size of the tragedy. Meanwhile, Save the Vietnamese Refugees invites you to write to the Prime Minister with the words: 'I believe that for the sake of humanity Britain should give sanctuary generously to refugees from Indochina'. It also invites financial contributions to: Save the Refugees Appeal, Account No: 71428659, Barclays Bank, 78 Victoria Street, London SW1. The money will go to voluntary agencies which are trying to help the refugees.

Liberia has refused permission to Bishop Muzorewa or any other member of his government to enter the country because it doesn't like the way in which the Rhodesian elections were conducted. This is a fine example of African hypocrisy. Liberia is ruled by an elite of the descendants of former American slaves who, while comprising a tiny minority of the population, unfailingly win all elections under the banner of the True Whig Party. When, in the 1950s, the late President Tubman won an election as usual, he routinely sent out some intelligence agents to arrest the man who had dared to stand against him. But Liberian politics are not as predictable as all that. Tubm an's opponent, so his supporters later maintained, swiftly turned himself into a white cat and scurried over the border into Sierra Leone. If Bishop Muzorewa were capable of such tricks, he might yet be able to attend the Organisation ofAfrican Unity's conference. But I fear he is not.

Writing in the Spectator last May, Auberon Waugh was complaining about the lack of recognition accorded to distinguished writers, particularly by Conservative governments. 'And now,' he wrote, 'they have allowed J.B. Morton, the immortal Beachcomber, to slip away unwept, unhonoured and unsung at the tender age of 85'. There is, however, to be a memorial mass in Westminster Cathedral under the auspices of the Catholic Writers' Guild. It will take place at 5.30 pm on Monday, 23 July, and we hope that the entire Conservative Cabinet will be there. Another memorial service of which we have regrettably failed to give our readers due warning is to be held this Friday, 13 July, at St Mary le Bow, Cheapside, for Nicholas Davenport, our former financial commentator.

Last week I watched David Dimbleby's interview with Mrs Mary Whitehouse, and! thought her rather endearing. But it is the only television programme I have ever seen which was clearly unacceptable for family viewing. For there was Mrs Whitehouse talking away to Mr Dimbleby about — of all things — oral sex. This, not unnaturally, aroused considerable curiosity with my daughters, though I resisted their interrogation like a man. Poor Mrs Whitehouse. What can have come over her? Incidentally, by what possible criterion of news judgment or public interest could the television news programmes have decided to. show a film of a wretched motorbicycle stuntman crashing to his death in an attempt to leap over 30 Rolls Royces? The spectacle was bath depressing and shocking.