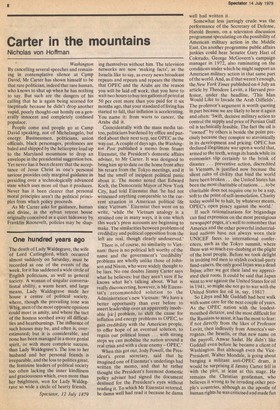 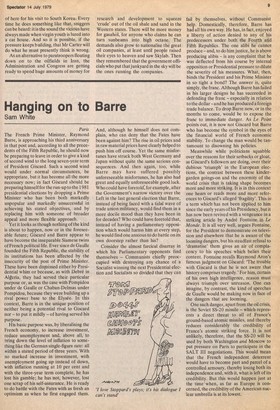 Carter in the mountains

Washington By cancelling several speeches and remaining in contemplative silence at Camp David, Mr Carter has shown himself to be that rare politician, indeed that rare human, who knows to shut up when he has nothing to say. But such are the dangers of his calling that he is again being scorned for ineptitude because he didn't drop another vapid, poorly thought-out homily on a generally innocent and completely confused populace.

People come and people go at Camp David speaking, not of Michelangelo, but energy. Businessmen, politicians, union officials, black personages, professors are baled and shipped by the helicopter load up to the Maryland mountains to drop an envelope in the presidential suggestion box. Yet never has it been clearer that the acceptance of Jesus Christ as one's personal saviour provides only marginal guidance in presiding over a technologically advanced state which uses more oil than it produces. Never has it been clearer that personal moral principles aren't the political principles from which policy proceeds.

As Mr Carter asks for guidance, human and divine, in the sylvan retreat house originally conceived as a quiet hideaway by Franklin Roosevelt, policies may be shap ing themselves without him. The television networks are now 'making facts', as the Israelis like to say, as every news broadcast repeats and repeats and repeats the theme that OPEC and the Arabs are the reason you will be laid off work, that you have to wait two hours to buy ten gallons of petrol at 50 per cent more than you paid for it six months ago, that your standard of living has started to fall, that inflation is accelerating. You name it: from warts to cancer, the Arabs did it.

Coincidentally with the mass media tattoo, politicians burdened by office and puzzled about their next step, see OPEC as the way out. A couple of days ago, the Washington Post published a memo from Stuart Eizenstat, the President's domestic affairs adviser, to Mr Carter. It was designed to bring him up to date on the home front after his return from the Tokyo meetings, and it had the smell of incipient political panic about it. The memo noted that Edward Koch, the Democratic Mayor of New York City, had told Eizenstat that 'he had not witnessed anything comparable to the current situation in American political life since Vietnam.' Eizenstat then went on to write, 'while the Vietnam analogy is a strained one in many ways, it is one which this week's press accounts are beginning to make. The similarities between problems of credibility and political opposition from the left are real, though clearly undeserved.'

There is, of course, no similarity to Vietnam: there is no political left worthy of the name and the government's 'credibility' problems are wholly unlike those of Johnson and Nixon, who were widely thought to be liars. No one doubts Jimmy Carter says what he believes: but they aren't sure if he knows what he's talking about. What is really disconcerting, however, is Mr Eizenstat's recommended solution to the Administration's new Vietnam: 'We have a better opportunity than ever before to assert leadership over an apparently insolvable [sic] problem, to shift the cause for inflation and energy problems to OPEC, to gain credibility with the American people, to offer hope of an eventual solution, to regain our political losses . . with strong steps we can mobilise the nation around a real crisis and with a clear enemy — OPEC.'

Somewhat less jarringly crude was the performance of the Secretary of Defense, Harold Brown, on a television discussion programme speculating on the possibility of American military action in the Middle East. On another programme public affairs junkies could hear Senator Gary Hart of Colorado, George McGovern's campaign manager in 1972, also ruminating on the conditions under which he might support an American military action in that same part of the world. And, as if that weren't enough, the New York Times published on 4 July an article by Theodore Levitt, a Harvard professor, under the headline, 'This Man Would Like to Invade the Arab Oilfields'. The professor's argument is worth quoting in part because we are likely to hear it again and often: 'Swift, decisive military action to control the supply and price of Persian Gulf oil is technically feasible. The fact the oil is "owned" by others is beside the point precisely because they conspire so atavistically in its development and pricing: OPEC has declared illegitimate war upon a world that, armed to the teeth, wrings its hands while its economies slip certainly to the brink of disaster . . preventive action, discredited in Vietnam, is justified now because the silent rules of civility that bind the world have been broken. . the United States has been the most charitable of nations. . . to be charitable does not require one to be a sap, soft to the point of self-immolation. Charity today would be to halt, by whatever means, OPEC's open piracy against the world.'

If such rationalisations for brigandage can find expression on the most prestigious newspaper pages, it's well to remember that America and the other powerful industrialised nations have not always worn their UNICEF faces to international conferences, such as the Tokyo summit, where there was so much eye-daubing at the plight of the boat people. Before we took delight in inviting red men to stylish cocktail-party fund-raisers, the only good Injun was a dead Injun; after we got their land we appreciated their roots, It could be said that Japan went to war against the United States for oil in 1941, so might she not go to war with the United States for oil in, say, 1981? So Libya and Mr Gaddafi had best walk with some care for the next couple of years. As the OPEC nation with the loudestmouthed dictator, and the most difficult for the Russians to assist, it has the most to fear: if not directly from the likes of Professor Levitt, then indirectly from America's surrogates, the Israelis, or that new name on the payroll, Anwar Sadat. He didn't like Gaddafi even before he became a client of Washington. But although even the VicePresident, Walter Mondale, is going about banging a militant anti-OPEC drum, it would be surprising if Jimmy Carter fell in with the plot, at least at this stage. He remains the Christian gentleman, who believes it wrong to be invading other people's countries, although as the apostle of human rights he was criticised and made fun of here for his visit to South Korea. Every time he does something like that, sniggers can be heard: it is the sound the vicious have always made when virgin youth is lured into a cat house. And so it is possible, if the pressure keeps building, that Mr Carter will do what he must presently think is wrong.

As an alternative to paratroopers floating down on to the oilfields in Iran, the Administration and Congress are getting ready to spend huge amounts of money for research and development to squeeze 'crude' out of the oil shale and sand in the Western states. There will be more money for gasahol, for anyone who claims he can turn sunbeams into high octane. The demands also grow to nationalise the great oil companies, at least until people raised their eyes to heaven and saw Skylab. Then they remembered that the government officials who put that junkyard in the sky will be the ones running the companies.