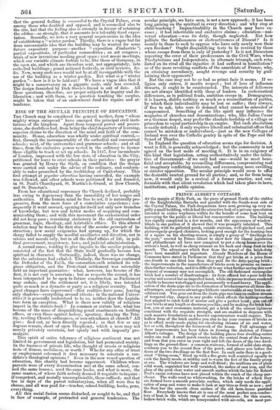 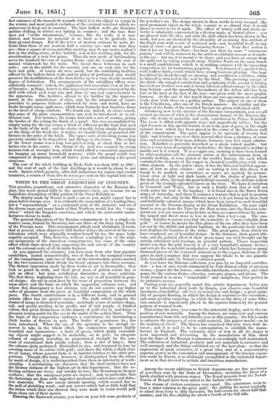 Ar the margin of Hyde Park, on the piece of ground North of the stables of the Knightsbridge Barracks and parallel with the South-west side of the Crystal Palace, the Park-frequenters have seen growing up very ra- pidly a small building, which had the attractive look of a private speculation intended to entice wayfarers within for the benefit of some host bent on purveying for the public at liberal but remunerative rates. The building was rapidly completed in a few months, and the appearance of window- blinds in one portion of it showed that it was promptly inhabited. This building, with its galleried porch, outside staircase, well-pitched roof, and picturesquely-grouped chimnies, looking good enough for the hunting-box of a squire on his shooting-manor, is simply a group of " dwellings for the poor," erected by Prince Albert to show how far liberal legislation and philanthropic art have now conspired to put a cheap house over the artisan's head, as well as cheap raiment on his back and cheap food in his- mouth. The advantages which flow from the repeal of the brick-duty have been manifold and important. Already Members of the House of Commons have stated in Parliament that they get bricks at a price from one-fourth to one-third less than they paid for the duty-paying brick ; the improvements in the manufacture of bricks seem to promise an imme- diate further reduction, and it is difficult to say what further saving this new element of economy may not accomplish. The old-fashioned rectangular brick had a number of disadvantages : its form offered but a poor hold for mortar and secured but an imperfect bond, while its porous texture rendered it liable to become waterlogged and permanently wet and heavy. The appli- cation of the drain-pipe die to the formation of bricks removes all these dis- advantage; and secures advantages hitherto unattainable at any but an ex- orbitant cost. You pour out from the drain-pipe machine an endless stream of tempered clay, shaped to any profile which affords the holding-surface best adapted to catch hold of mortar and give a perfect bond ; you cut off your bricks at any length or shortness you like; and by making the brick hol- low, you at once economize material, get a brick of the utmost lightness consistent with the requisite strength, and are enabled to dispense with such massive foundations as a heavier superstructure would require. The hollow form of the brick enables you also to lay your courses of bricks so as to afford ready-made piping for circulating streams of air and water, hot or cold, throughout the framework of the house. Full alvantage of these improvements has been taken in forming the skeleton of Prince Albert's cottages. The design of the building places four dwelling-suites under one roof. A small porch recedes into the central front of the house; and from that you enter on your right and left the doors of the two dwel- lings on the ground-floor : a common staircase, formed of solid slate steps, conducts you to the second floor of the porch, and places you before the doors of the two dwellings on the first floor. In each suite there is a good- sized " living-room," fitted up with a fire-grate well contrived equally to cook the family meals at midday and to warm the feet of the family group at eve. The windows are large and well-fitted; the mullions are of plain solid wood, unpainted but well varnished, the sashes of cast iron, and the glass of the good clear water and smooth surface which the late Sir Robert Peel's excise reforms have now placed within the reach of the cheap pur- chaser. The walls need no whitewashing, for the bricks of which they are formed have a smooth porcelain surface, which only needs the appli- cation of soap and water to make it look at any time as fresh as new ; and the floor has the smooth clean surface of the old farm-house, pantiled floor. Everybody knows that air is one of the most perfect non-conduc- tors of heat in the whole range of natural substances : for this reason, hollow-brick walls, which are honeycombed with air-cells, are most per-

feet retainers of the household warmth which it is the object to retain in the winter, and most perfect excluders of the external sun-heat which we endeavour to keep out in summer. The bare hollow walls are therefore neither chilling in winter nor baking in summer ; and the bare floor does not "strike rheumatism," because, like the walls, it is ven- tilated, and because its material is so hard as to be perfectly free from ground-damps. But if the wives of modern artisans be more de- licate than those of our yeomen half a century ago—and we fear they are—then a square of cocoa-nut-fibre matting may be put under madam's feet in the sitting-room, at her bedside, and at her washing-sink, for the consideration of a very few pence. Thus the new mode of brickmaking saves the landlord the cost of wooden floors, and the tenant the cost of annual whitewash for the walls. We found three bedrooms in each suite ; one in the middle for the parents, and one on each side for the boys and girls : of course all were small, but the ventilating facilities offered by the hollow-brick walls and by plates of perforated zinc would preserve the healthfulness of the dormitories up to a very closely crowded degree of habitation. The arrangements of the subsidiary offices were admirably compact ; indeed, the appliances had somewhat even of the air of luxuries : perhaps, however, this impression was rather conveyed by the skill with which each want was met than by any real expensiveness in the apparatus. The facilities offered to the builder by the improve- ments in the manufacture of slate, and by the adaptation of coarse porcelain to purposes hitherto subserved by stone and metal, have no doubt brought many appliances, which were formerly dear luxuries, down to the level of cheap comforts. We found out, indeed, on closer search, that some of the plain ornamentation can now be introduced at no ad- ditional cost. For instance, the rooms had each a sort of cornice, giving the border of the ceiling the finish of a panel : this was accomplished by simply using for the top course a brick of different profile from that used in the body of the wall ; and the choice of profile being simply dependent on the shape of the brick-die, it makes, we should think, no practical dif- ference in the price of the brick. The upper suite of dwelling-rooms was precisely similar in its disposition and fittings to the lower. The ceiling of the lower rooms was a long low-pitched arch, of about four or five inches rise in the centre : the thrust of the arch was resisted by strong tension-rods of wrought iron, which would afford a convenient apparatus for hanging up many household matters ; while the grand result was compassed of dispensing with all timber joists and obtaining a fire-proof structure.

The cost of the whole building in Hyde Park was from 450/. to 500/. ; and the rent of each of the four dwellings in it would be about 5s. per week : figures which promise, after full deductions for repairs and vacant tenancies, a return of from five to seven per cent on the capital laid out.