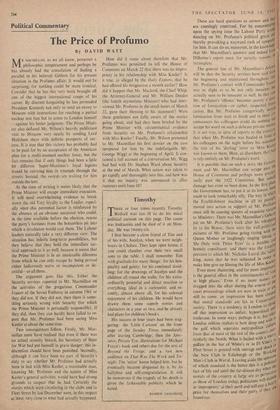 The Price of Profumo

By DAVID WATT MR MACMILLAN, as we all know, possesses a philosophic temperament and perhaps he has already had the consolation of finding a parallel in his beloved Gibbon for his present situation in the Profumo affair. It would not be surprising, for nothing could be more ironical. Consider that he has this very week brought off one of the biggest international coups of his career. By discreet bargaining he has persuaded President Kennedy not only to send an envoy to Moscow with instructions for reaching a partial nuclear test ban but to come to London himself —against his better judgment. The Prime Minis- , ter also deflated Mr. Wilson's heavily publicised visit to Moscow very neatly by sending Lord Hailsham there with definite prospects of suc- cess. It is true that this victory has probably had to be paid for by an acceptance of the American plan for a multi-manned nuclear force; but the fact remains that if only things had been a little bit different Super-Maximus's loyal legions would be carrying him in triumph through the streets. Instead, the sword; are waiting for him outside the tent.

At the time of writing it seems likely that the Prime Minister will escape immediate execution. It will need overwhelming evidence to break down the old Tory loyalty to the Leader, especi- ally since .this perennial factor is reinforced by the absence of an obvious successor who could, in the time available before the election, rescue the party's fortunes from the bottomless pit into which a revolution would cast them. The Labour leaders naturally take a very different view. The situation has infinite long-term possibilities, but they believe that they hold the immediate tac- tical approach to it as well, because it seems that the Prime Minister is in an intolerable dilemma from which he can only escape by being proved either ludicrously naïve or incompetent or de- ceitful—or all three.

The argument goes like this. Either the Security services reported to Mr. Macmillan on the activities of the gregarious Commander Ivanov of the Soviet Embassy in autumn 1961 or they did not. If they did not, then there is some- thing seriously wrong with Security (for which the Prime Minister is personally responsible). If they did, then they can hardly have failed to re- port that Mr. Profumo had been seeing Miss Keeler at about the same time.

Two consequences follow. Firstly, Mr. Mac- millan must have realised that even if there was no actual security breach, his Secretary of State for War had put himself in grave danger; this in- discretion should have been punished. Secondly, although it can have been no part of Security's duty to say whether Mr. Profumo had actually been in bed with Miss Keeler, a reasonable man, knowing Mr. Profumo and the nature of Miss Keeler's general activities, w ould have had strong grounds to suspect that he had. Certainly the stories which were circulating in the clubs and in Fleet Street by last December were, in this respect at least, very close to what had actually happened. How did it come about therefore that Mr. Profumo was permitted to tell the House of Commons on March 22 that there was no impro- priety in his relationship with Miss Keeler? Is it true, as alleged by the Daily Express, that he had offered his resignation a month earlier? How did it happen that Mr. Macleod, the Chief Whip, the Attorney-General and Mr. William Deedes (the fourth mysterious Mini,ster) who had inter- viewed Mr. Profumo in the small hours of March 22, gave their blessing to his statement? Were these gentlemen not fully aware of the stories going about, and had they been briefed by the Prime Minister with circumstantial evidence from Security on Mr. Profumo's relationship with Miss Keeler? Finally, Mr. Wilson presented to Mr. Macmillan his first dossier on the case (prepared for him by the indefatigable Mr. George Wigg) at the beginning of April. It con- tained a full account of a conversation Mr. Wigg had had with Dr. Stephen Ward about Security at the end of March. What action was taken to go rapidly and thoroughly into this, and how was it that no inquiry was announced to allay rumours until June 10? These are hard questions to answer and theY are cunningly contrived. For by concentratng i upon the spying issue the Labour Party aveid5,, dancing on Mr. Profumo's political grave anu thereby provoking a wayward rush of symeall for him. It can do so, moreover, in the know10, that Mr. Macmillan's answers and indeed Lotn Dilhorne's report must, for security reasons, be incomplete. The general line of Mr. Macmillan's defencc will be that the Security services have said fr°111 the beginning and maintained throughout that Mr. Profumo's contact with Commander Ivan°, was so slight as to be not only innocent bu' actually seen to be innocent as well. In that ca° Mr.. Profumo's 'offence' becomes purely a goes' tion of fornication--or rather, suspected ft.iirli; cation. But Mr. Profumo categorically de' fornication from start to finish and in these cif' cumstances his colleagues could do nothing hut accept his word on such a delicate private matter' It is not true, in spite of reports to the contral that when Mr. Profumo was hauled in front °t his colleagues on the night before his statetneu the text of his 'darling' letter to Miss KreleAr was known to them. Here, as elsewhere, they hli" to rely entirely on Mr. Profumo's word. It is possible that on such a story the Govern' ment and Mr. Macmillan can scrape Past th,! House of Commons and perhaps more precari'j ously past the 1921 Committee. But damage has even so been done. In the first the Government has, to put it at its lowest. III made to look remarkably silly. The way in %Oil:I the Establishinent machine in all it § part°Pl„Y moved into action in support of Mr. Profutm: must still be causing spasms of exquisite torte? to Ministers. There was Mr. Macmillan's fatherlY pat on Mr. Trofumb's back after his whoPPI lie to the House; there were the well-publicishee pictures of Mr. Profumo going racing with tio Queen Mother or laughingly singing Drilik Me Only with Thine Eyes' to a humble homely constituent; and there was the forceitje pressure to which Mr. Nicholas Luard, the '.4jrto king, states that he was subjected in order r make him give up filming the life of Miss Keefe: Even more shattering, and far more importa; is the general effect in the constituencies ofre in high places.' Even if no more names Ile dragged into the affair during the course °I. ire court proceedings which are now in train Of atej still to come,. an impression has been erea.,,e that moral standards are lax in Conservat'o'g society. There is a tendency in London fo off this impression as unfair, hypocritical irrelevant. In some ways, perhaps it is; but "is London seldom realises is how deep and wideure the gulf which separates metropolitan altar, from that of most of the rest of the countrY. P ,.„ ticularly the North. What is hailed with a '11.erlio' guffaw in the bar of White's or in El Virl° ja Fleet Street is greeted with outrage and shockw the New Club in Edinburgh or the V0rk!00 Men's Club in Wirral. Leaving aside the guest! of which standard is the better this is a P°' the fact of life and until the far-distant day when morals of the country at large are as pernbl'ie as those of London today, politicians will dab in `impropriety at their peril and will pay a he3‘0, price for themselves and their party if 1110 3 found out.