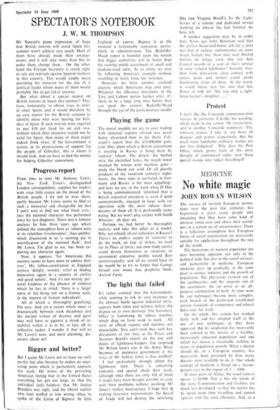 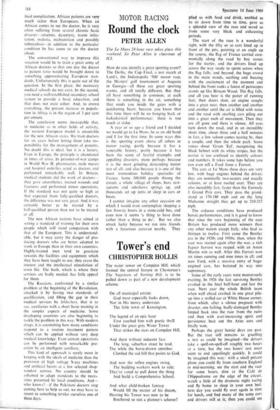 The success of western European institu- tions over the past few centuries has hypnotised a great many people into imagining that they have some kind of intrinsic virtue over and above their useful- ness in a certain set of circumstances. There is a fallacious assumption that European forms of social organisation are necessarily suitable for application throughout the rest of the world.

The limitations of western experience are now becoming apparent, not only in the political field, but also in the social services, and particularly in medicine. European medicine grew up gradually, at the same pace as science, industry and the growth of population. The physicians evolved out of the apothecaries, and the surgeons out of the anatomists; the GP arose as an all- purpose combination of both. As time went by and techniques became more complex. each branch of the profession established certain standards of competence and ethical behaviour for itself.

On the whole, this system has worked fairly well, and has adapted itself to the use of new techniques as they have appeared. But its adaptation has necessarily been tailored to the service of a wealthy, increasingly educated population and one which has shown a reasonable stability in terms of population growth. What a doctor should do, in a European country, has necessarily been governed by how many doctors were available to do it. Our whole concept of medicine is based on a doctor- patient raio in the region of 1 : 1000.

In most parts of Africa, the usual ratio is nearer 1:20.000. Nor is this the whole of the story. Communication and facilities are much less developed, so that the doctor has to spend more time travelling and cannot operate with the same efficiency. And, as a

final complication, African patients are very much sicker than Europeans. When an

African comes to see the doctor, he is very often suffering from several chronic basic diseases—anaemia, dysentery, worm infes- tation, malaria, malnutrition and possibly tuberculosis—in addition to the particular condition he has come to see the doctor about.

The conventional way to improve this situation would be to train a great army of African doctors so that one day the doctor to patient ratio would be brought down to something approximating European stan- dards. Unfortunately this is quite out of the question. In the first place, the necessary medical schools do not exist. In the second, you need a well-established secondary school system to provide a basic education, and that does not exist either. And, to crown everything, the present increase in popula- tion in Africa is in the region of 3 per cent per annum.

The conclusion seems inescapable that, in medicine as in other fields of activity, the western European model is unsuitable for the new African states. We train doctors for six years before letting them take res- ponsibility for the management of patients.

No doubt this is ideal, but it is a luxury. Even in Europe, the principle is abandoned in times of crisis. In prisoner-of-war camps in World War II, pharmacists, male nurses and hospital orderlies acted as doctors and performed remarkably well. In Britain, medical students did the work of doctors— they gave anaesthetics, treated wounds and fractures and performed minor operations.

If the standard was not quite so high as that expected from fully-qualified doctors,

the difference was not very great. And it was certainly better to be treated by a half-qualified person than not to be treated at all.

The new African nations have aimed at setting a standard of training for their own people which will stand comparison with that of the European. This is understand- able, but it may carry the danger of pro- ducing doctors who are better adapted to work in Europe than in their own countries. Highly-trained men tend to gravitate towards the facilities and equipment which they have been taught to use; they crave the interest and the intellectual stimulation of town life. The bush, which is where their services are badly needed, -has little appeal for them.

The Russians, confronted by a similar problem at the beginning of the Revolution, attacked it by having two standards of qualification, and filling the gap in their

medical services by feldschers, that is to say, auxiliaries with a short basic training in the simpler aspects of medicine. Some developing countries are also beginning to tackle the problem in this way. With modern

drugs, it is astonishing how many conditions respond to a routine treatment pattern which can be applied without very deep medical knowledge. Even certain operations can be performed with remarkable pre- cision by an intelligent auxiliary.

This kind of approach is surely more in keeping with the ideals of medicine than the provision of high voltage X-xay machines and artificial hearts at a few selected shop- window centres. No country should be ashamed to adapt standards to the neces- sities presented by local conditions. And— who knows?—if the Pakistani doctors stop coming here to help us out, we may have to resort to something similar ourselves one of these days.