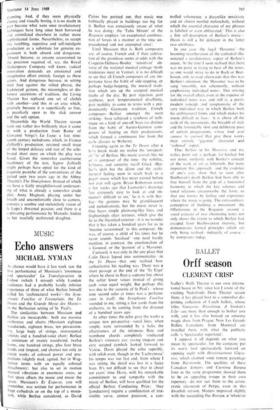 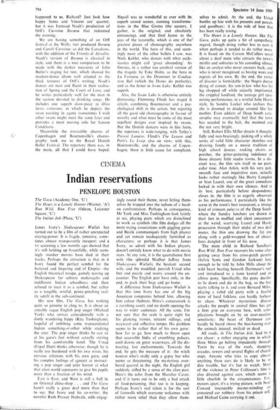 Sadler's Wells Theatre is our own interna- tional house in N I; since last I wrote of the exciting Nederlands Dans Theater season there, it has played host to a somewhat dis- piriting collection of Czech ballets, whose titles—Gangrene, Hiroshima, A Student's Life—are more than enough to bother you with, and it has also housed an amusing magic show from Prague. Now Les Grands Ballets Canadiens from Montreal arc installed there. with what the publicity calls 'a Spectacular repertoire'.

I suppose it all depends on what you mean by spectacular, for the company put its worst foot spectacularly forward on opening night with Divertissement Glazu- nay, which claimed some remote parentage from Ravnionda. The qualities of these Canadian dancers and Carmina Burana later in the same programme showed them to be an appealing troupe in their own repertory—do not suit them to the aristo- cratic classicism of Petipa, even in this dwarfish version. Matters improved slightly with the succeeding Pas Rompu, a 'whatever happened to us, Richard? Just look how happy Sonia and Vincent are' quartet; but it was Fernaud Nault's production of Orff's Carmina Burana that redeemed the evening.

We are having something of an Orff festival at the Wells; NDT produced Burana and CamIli Carmina: so did the Canadians, with the addition of the Trionfo di Afrodite. Nault's version of Burana is classical in style, and there is a nice comparison to be made with the darker measures of John Butler's staging for Nor, which showed his modern-dance idiom well attuned to the thick textures of Orff's writing. Nault's dances are neat and fluent in their realisa- tion of Spring and the Court of Love. and he writes particularly well for the man in the section devoted to drinking songs. He includes one superb show-piece in Olim lacus colueram, in which he depicts the swan roasting in agony (sometimes I wish other swans might meet the same fate) and provides a most moving solo for Sanson Candelaria.

Meanwhile the irresistible charms of Copenhagen and Bournonville's choreo- graphy took me to the Royal Danish Ballet Festival. The repertory there was, in the main, all that I could have. hoped.

Napoli was as wonderful as ever with its superb crowd scenes, cunning transforma- tions in the Blue Grotto (the scenery, I gather, is the original, and absolutely entrancing), and that final hymn to the joys of the tarantella, which is one of they greatest pieces of choreography anywhere in the world. The hero of this, and seem- ingly most of the other ballets I saw, was Niels Kehlet, who dances with what eccle- siastics might call 'grace abounding'. As Orestes, in a rather too cerebral version of the tragedy by Eske Holm, as the hero in La Ventana, as the Drummer in Gradua- tion Ball (which the Danes do perfectly), and as the Jester in Swan Lake, Kehlet was superb.

Alas, the Swan Lake is otherwise entirely distressing; Flemming Flindt has staged it afresh, combining Bourmeister and a psy- chological shift in the action, but rejecting all the good old choreography in favour of novelty and what must be some of the most repellent designs ever inspired by swans. But the Danish dancers were in fine form, the repertory is wide-ranging, with Tetley's Pierrot Lunaire, Flindt's The Lesson and Petit's Le Loup also on view; with this, Bournonville, and the charms of Copen- hagen, there is little cause for complaint.