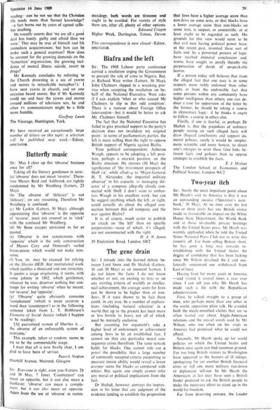 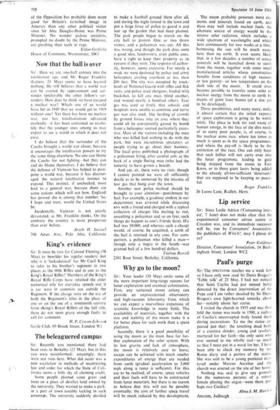 Sir: Surely the most important point about Mr Heath's visit to America is that it was an outstanding success ('Spectator's note- book,' 30 May). At no time over the last two or three years has any British visitor made so favourable an impact on the White House State Department, the World Bank and at those invaluable private briefings with the United States press. Mr Heath was warmly applauded when he told the United States National Press Club not to write this country off. Far from selling Britain short, he has gone a long way towards re- establishing with the United States the delves of confidence that has been lacking since Mr Wilson devalued the £ and uni- laterally announced our withdrawal from East of Suez.

Having lived for many years in America —and visited it several times a year ever since, I can tell you why Mr Heath has made such a hit with the Republican administration.

First, he talked straight to a group of men, who perhaps more than any other in the world, appreciate plain talk. He avoided both the mealy-mouthed elicit& that are so often trotted out about Anglo-American relations and the weasel words used by Mr Wilson, who too often on his visits to America had promised what he could not afford.

Secondly, Mr Heath spoke up for world policies on which the United States and Britain once again can find common ground. For too long British visitors to Washington have appeared as the bearers of ill tidings. apologising for yet another British financial crisis or still one more military run-down or diplomatic sell-out. In Mr Heath the Americans at last may have seen a British leader prepared to ask the British people to make the necessary effort to stand up in the world for freedom.

Far from deserving censure. the Leader

of the Opposition has probably done more good for Britain's tarnished image in America than any other political visitor since Sir Alec Douglas-Home was Prime Minister. No wonder jealous socialists, prompted no doubt by the Prime Minister, are gnashing their teeth in rage.