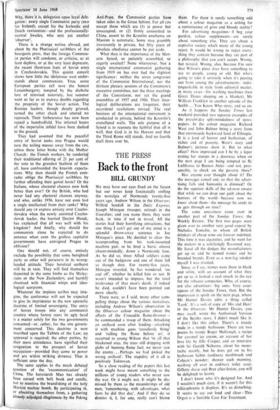 Back to the front

We may have our eyes fixed on the future but our noses keep fascinatedly sniffing the nostalgia of Normandy twenty-five years ago. Andrew Wilson in the Observer; Wilfrid Sendail in the Daily Express; Joseph Minogue (trooper, retired) in the Guardian; and you name them, they went back, in time if not in travel. All the stories had their horrifying attractions, but one thing I can't get out of my mind is a splendid throw-away sentence in Joe Minogue's piece. He decided to clear the waterproofing from his tank-mounted machine gun; so he fired a burst. almost absent-mindedly, down a Normandy lane. As he did so, three Allied soldiers came out of the hedgerow and one of them fell as though shot. For twenty-five years, Minogue revealed, he has wondered. 'on and off', whether he killed him or not. It wasn't intended to impress, but the total irrelevance of that man's death, if indeed he died, couldn't have been pointed out more clearly.

There were, as I said, many other com- pelling things about the various narratives, including Andrew Wilson's observation in the Observer colour magazine about the effects of the Crocodile flame-th rower— he commanded a troop of them. Attacking an orchard soon after landing—attacking it with machine guns 'ceaselessly firing' and 'rolling the flame before us'. it occurred to young Wilson that 'in all that blackened area. the trees still dripping with globs of burning flame fuel, we never saw the enemy ...Perhaps we had picked the wrong orchard'. The stupidity of it all is positively Tolstovan.

So a close reading of the papers this last week might have meant something to the millions of young readers who never saw the war. Or it might not. It might be dis-. missed by them as the maunderings of old men, 'remembering, with advantages, what feats he did that day'. And if they do so dismiss it, I, for one, really can't blame them. For there is surely something odd about a colour magazine as a setting for a reminiscence of grim and bloody reality?

For advertising magazines—I beg your pardon, colour supplements—are surely about something else. They are about a capitalist society which many of the young reject. It would be wrong to reject every- thing they contain because they are part of a philosophy that you can't accept. Wrong, but natural. Wrong, also, because I'm sure that Wilson's piece does have something to say to people, young or old. But who's going to take it seriously when it's peering out from among the advertisements—indis- tinguishable in style from editorial matter, in many cases—for washing machines (two Great Danes sleeping on a blanket). Mr William Franklyn in another episode of the Scchh ... You Know Who story, and so on.

As it happens the Sunday Times last weekend provided two separate examples of the present-day split-mindedness of news- papers. In the colour magazine Richard West and John Bulmer bring a story from that enormously backward land of Ethiopia. It is a land of horror and barbarism, of riches and of poverty. West's story and Bulmer's pictures show it. But to what effect? How impressed can I be by a leper resting her stumps in a doorway when on the next page 1 am being tempted to fly Lufthansa to Buenos Aires—and not, pres- umably, to check on the poverty there?

Has anyone ever thought about it? Do the messages cancel out, so that the adver- tising fails and humanity is dimmed? Or do the superior skills of the ad-man ensure that while we can drop our guilt about the horrors of the world—because now we know about them—the message he sends to us gets through on time?

The same uneasiness came over in another part of the Sunday Times; the Weekly Review. The first two pages were given over to another very good expose by Nicholas Tomalin, to whom all British drinkers of cheap wine are forever indebted. This time it was cigarettes, and he went for the makers in a satisfyingly flavoured way. He listed all the dodges the manufacturers get up to and he named names and he branded brands. Even as a non-fag smoker myself I was rivetted.

Since, as I say. names were there in black and white, with an account of what they get up to, it looked a real smack in the eye for the tobacco companies. Who, of course, are also advertisers—big ones. Very cour- ageous of the Sunday Times, then. But the impression is spoilt on the next page, where Mr Hunter Davies edits a thing called `Look'. It's a sort of copy of 'His and Hers' in the Observer. Mr Hunter Davies. you may recall, wrote the Authorised Version of the Beatles story. I didn't much like it. I don't like this either. There's a trendy nude in a trendy bathroom. There are two poems by trendy Roger McGough. a recipe for caramel ice cream, an account of her love life by Jilly Cooper, and an interview with Sir Gerald Nabarro. about his mous- tache mainly, but he does get on to his bathroom habits (ordinary toothbrush and Colgate's powder; shower each morning, washing all over in ordinary toilet soap; Gillette shave and Brut after-lotion, you will be delighted to learn). I don't know who it's designed for. And I wouldn't much care, if it weren't for this schizophrenia it displays. It's so disturbing. It seems to say out loud and clear—This Organ is a Suitable Case For Treatment.