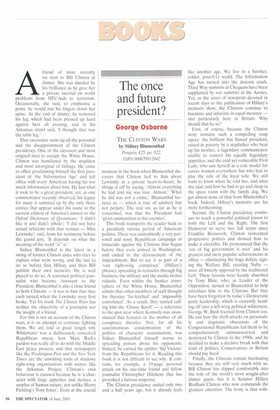 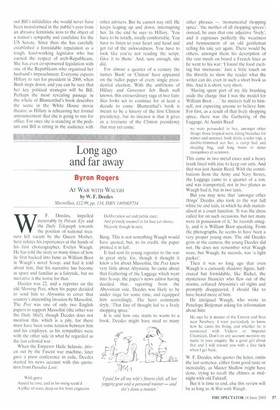 The once and future president?

THE CLINTON WARS by Sidney Blumenthal Penguin, £25, pp. 822, ISBN 000670912042 Afriend of mine recently sat next to Bill Clinton at dinner. She was dazzled by his brilliance as he gave her a private tutorial on world problems from HIV/Aids to terrorism. Occasionally, she said, to emphasise a point, he would run his fingers down her spine. At the end of dinner, he removed his leg, which had been pressed up hard against hers all evening, and in his Arkansas drawl said, 'I thought that was the table leg.'

That encounter sums up all the potential and the disappointment of the Clinton presidency. One of the cleverest and most original men to occupy the White House, Clinton was humiliated by the stupidest and most unoriginal of failings. He came to office proclaiming himself the first president of 'the Information Age' and left office with every American having far too much information about him. He had what it took to be a great president, yet, as one commentator recently observed, his legacy for many is summed up by the only three entries that appear under his name in the current edition of America's answer to the Oxford Dictionary of Quotations: '1 didn't like it and didn't inhale': 'I did not have sexual relations with that woman — Miss Lewinsky'; and, from his testimony before the grand jury. 'It depends on what the meaning of the word "is" is.'

Sidney Blumenthal is the latest in a string of former Clinton aides who tries to explain what went wrong, and the last to do so before first Hillary and then Bill publish their own memoirs. He is well placed to do so. A seasoned political journalist who became Assistant to the President, Blumenthal is also a close friend to both Clintons — it was to him that they each turned when the Lewinsky story first broke. Yet his book The Clinton Wars has neither the objectivity of a journalist nor the insight of a friend.

For this is not an account of the Clinton wars, it is an attempt to continue fighting them. We are told at great length why Whitewater was a deliberately conceived Republican smear, how Marc Rich's pardon was really all to do with the Middle East peace process, and that newspapers like the Washington Post and the New York Times are the unwitting tools of shadowy right-wing organisations with names like the Arkansas Project. Clinton's own behaviour is excused because he is 'a character with large appetites and desires, a surplus of human nature, not unlike Henry Fielding's Torn Jones'. Even at the crucial moment in the book when Blumenthal discovers that Clinton lied to him about Lewinsky in a private heart-to-heart, he shrugs it off by saying, 'Almost everything he had told me was true. Almost.' What he did was not a crime,' Blumenthal lec tures us which is true of adultery but not perjury. The real sin, as far as he is concerned, was that the President had 'given ammunition to his enemies'.

This book transports the reader back to a peculiarly vicious period of American politics. There was undoubtedly a very personal and nasty Republican campaign of innuendo against the Clintons that began before they even arrived in Washington, and ended in the denouement of the impeachment. But to see it as part of a 'vast right-wing conspiracy' (Hillary's phrase), spreading its tentacles through big business, the military and the media invites ridicule. Even within the bunker atmosphere of the White House, Blumenthal admits that other members of staff thought his theories 'far-fetched' and 'impossibly convoluted'. As a result, they started calling him the 'Grassy Knoll' — a reference to the spot near where Kennedy was assassinated that features in the mother of all conspiracy theories. Nor, for all his sanctimonious condemnation of the politics of character assassination, was Sidney Blumenthal himself averse to spreading poison about his opponents. Indeed, he earned the epithet 'Sid Vicious' from the Republicans for it. Reading this book it is not difficult to see why. It contains, for example, a 19-page personal attack on his one-time friend and fellow journalist Christopher Hitchens that has provoked a furious response.

The Clinton presidency ended only two and a half years ago, but it already feels like another age. We live in a harsher, colder, post-9/11 world. The Information Age has turned into the dotcom crash. Third Way summits at Chequers have been supplanted by war summits in the Azores. Yet, as the acres of newsprint devoted in recent days to the publication of Hillary's memoirs show, the Clintons continue to fascinate and infuriate in equal measure — and particularly here in Britain. Why should that be so?

First, of course, because the Clinton story remains such a compelling soap opera: the brilliant but flawed president, raised in poverty by a stepfather who beat up his mother, a legendary communicator unable to control his equally legendary appetites; and the cold yet vulnerable First Lady, who saw herself as a role model for career women everywhere but who had to play the role of the loyal wife. We still want to know when he told her, and what she said, and how he had to go and sleep in the spare room with the family dog. We get almost none of that from Blumenthal's book. Indeed, Hillary's memoirs are far more forthcoming.

Second, the Clinton presidency continues to teach a powerful political lesson to both the Left and the Right. The first Democrat to serve two full terms since Franklin Roosevelt, Clinton reinvented progressive politics and showed how to make it electable. He pronounced that the 'era of big government is over' and his greatest and most popular achievements in office — eliminating the huge deficit, signing the Welfare Bill, creating Nafta — were all bitterly opposed by the traditional Left. These lessons were keenly absorbed by Tony Blair, who, as Leader of the Opposition, turned to Blumenthal to help introduce him to the Clintons. But they have been forgotten by today's Democratic party leadership, which is currently heading off into a left-wing political wilderness. George W. Bush learned from Clinton too. He saw how the shrill attacks on personality and dogmatic obsessions of the Congressional Republicans led them to be comprehensively outmanoeuvred and destroyed by Clinton in the 1990s, and he decided to make a decisive break with that kind of politics. Conservatives in Britain should pay heed.

Finally, the Clintons remain fascinating because they are still very much with us. Bill Clinton has slipped comfortably into the role of the world's most sought-after dinner guest, but it is Senator Hillary Rodham Clinton who now commands the greatest attention. The irony is that with out Bill's infidelities she would never have been transformed in the public's eyes from an abrasive feministic icon to the object of a nation's sympathy and candidate for the US Senate. Since then she has carefully established a formidable reputation as a tough. hard-working legislator who has earned the respect of arch-Republicans. She has even co-sponsored legislation with one of the Republicans who organised her husband's impeachment. Everyone expects Hillary to run for president in 2008, when Bush steps down, and you can be sure that her key political strategist will be Bill. Perhaps the most revealing passage in the whole of Blumenthal's book describes the scene in the White House movie theatre as Hillary is rehearsing her formal announcement that she is going to run for office. For once she is standing at the podium and Bill is sitting in the audience with other advisers. But he cannot stay still. He keeps leaping up and down, interrupting her. In the end he says to Hillary. 'You have to be totally, totally comfortable. You have to listen to your heart and head and get rid of the awkwardness. You have to look like you're not reading the script. Give it to them.' And, sure enough, she did.

For almost a quarter of a century the names 'Bush' or 'Clinton' have appeared on the ballot paper of even: single presidential election. With the ambitions of Hillary and Governor Jeb Bush well known, this extraordinary saga of two families looks set to continue for at least a decade to come. Blumenthal's book is meant to be a history of the first Clinton presidency, but its interest is that it gives us a foretaste of the Clinton presidency that may yet come.