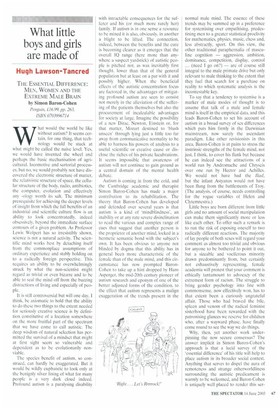 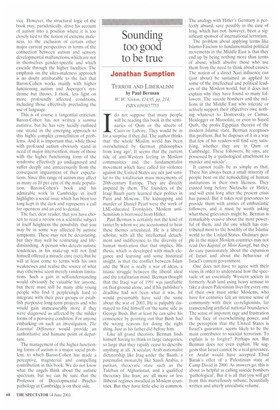 What little boys and girls are made of

THE ESSENTIAL DIFFERENCE: MEN, WOMEN AND THE EXTREME MALE BRAIN by Simon Baron-Cohen Penguin, £16.99. pp. 263, ISBN 0703996714 What would the world be like without autism? It seems certain, for one thing, that technology would be stuck at what might be called the naive level. Yes, we would have invented the wheel and perhaps the basic mechanisation of agricultural, locomotive and sartorial processes, but no, we would probably not have discovered the electronic structure of matter, the relativistic structure of space, the cellular structure of the body, radio, antibiotics, the computer, evolution and effectively any -ology worth its salt. The minimum prerequisite for achieving the deeper levels of insight from which the full benefits of an industrial and scientific culture flow is an ability to look concentratedly, indeed obsessively, beyond the immediate surface contours of a given problem. As Professor Lewis Wo!pert has so irresistibly shown, science is not a natural activity. The scientific mind works best by detaching itself from the commonplace assumptions of ordinary experience and stably holding on to a radically foreign perspective. This requires an ability to be overwhelmingly struck by what the non-scientist might regard as trivial or even bizarre and to be able to seal the mind off from the buzzing distractions of living and especially of people.

It is still controversial but will one day. I think, be axiomatic to hold that the ability to do these two things to the extent needed for seriously creative science is by definition constitutive of a location somewhere on the more fruitful part of the spectrum that we have come to call autistic. The deep wisdom of natural selection has permitted the survival of a mindset that might at first sight seem so vulnerable and dependent as to be evolutionarily nonviable.

The species benefit of autism, so construed, can hardly be exaggerated. But it would be wildly euphuistic to look only at the benignly silver lining of what for many people is a very dark cloud indeed. Profound autism is a paralysing disability with intractable consequences for the sufferer and his (or much more rarely her) family. If autism is in one sense a resource to be mined it is also, obviously, in another a blight to be lifted. The connection, indeed, between the benefits and the cure is becoming clearer as it emerges that the overall IQ range (here more than anywhere a suspect yardstick) of autistic people is pitched not, as was inevitably first thought. lower than that of the general population but at least on a par with it and possibly higher. When the beneficial effects of the autistic concentration focus are factored in, the advantages of mitigating profound autism are seen to consist not merely in the alleviation of the suffering of the patients themselves but also the procurement of incalculable advantages for society at large. Imagine the possibility of a new Dirac, Newton, Einstein or, for that matter, Mozart destined to 'blush unseen through lying just a little too far away from communicative normality to be able to harness his powers of analysis to a useful scientific or creative cause or disclose the riches of his private lucubrations. It seems impossible that awareness of autism will not continue to gain ground as a central domain of the mental health debate.

Autism is coming in from the cold, and the Cambridge academic and therapist Simon Baron-Cohen has made a major contribution to its rehabilitation. The theory that Baron-Cohen has developed and defended over several years is that autism is a kind of `mindblindness', an inability or at any rate severe disinclination to read the various and complex range of cues that suggest that another person is the proprietor of another mind, locked in a hermetic semantic bond with the subject's own. It has been obvious to anyone not blinded by dogma that this ability has in general been more characteristic of the female than of the male mind, and this circumstance has now prompted BaronCohen to take up a hint dropped by Hans Asperger, the mid-20th century pioneer of autism research and eponym of one of the better adjusted forms of the condition, to the effect that autism represents a malign exaggeration of the trends present in the normal male mind. The essence of these trends may be summed up in a preference for systemising over empathising, predestining men to a greater statistical proclivity for mathematics, physics, music, chess and, less abstractly, sport. On this view, the other traditional paraphernalia of masculine cognition — aggression, ambition, dominance, competition, display, control ... (need I go on?) — are of course still integral to the male primate drive but only relevant to male thinking to the extent that they fuel that search for a purchase on reality to which systematic analysis is the incontestable key.

To say that a tendency to systemise is a marker of male modes of thought is to assume that talk of a male and female mind is itself in the empirical data, and this leads Baron-Cohen to set his account of autism in a broad survey of sex differences which puts him firmly in the Darwinian mainstream, now surely the ascendant paradigm. Like other revisionists in this area, Baron-Cohen is at pains to stress the instrinsic strengths of the female mind, not just, I think, to cover his flank but because he can indeed see the attractions of a world run by Andromache and Chryseis over one run by Hector and Achilles. We would not have had the Iliad, but the infant Astyanax would not have been flung from the battlements of Troy. (The analysis, of course, needs controlling for the rogue variables of Helen and Clytemnestra.) Little boys are born different from little girls and no amount of social manipulation can make them significantly more or less like each other. To offer such a remark is to run the risk of exposing oneself to two radically different reactions. The majority of lay people of both sexes will regard your comment as almost too trivial and obvious for anyone to be bothered to point it out, but a sizeable and vociferous minority drawn predominantly from, but certainly not exhaustively representing, female academia will protest that your comment is ethically tantamount to advocacy of the extremest form of racism. The struggle to bring gender psychology into line with commonsense, now effectively won, has to that extent been a curiously ungrateful affair. Those who had braved the bile, spleen and venom of the radical feminist sisterhood have been rewarded with the patronising glances we reserve for children who, after a wayward phase, have finally come round to see the way we do things.

Why, then, yet another work underpinning the now secure consensus? The answer implicit in Simon Baron-Cohen's approach is that a lucid survey of the 'essential difference' of his title will help to place autism in its broader social context. Anything that serves to dispel the aura of remoteness and strange otherworldliness surrounding the autistic predicament is warmly to be welcomed, and Baron-Cohen is uniquely well placed to render this ser

vice. However, the structural logic of the book may, paradoxically, drive his account of autism into a position where it is too closely tied to the notion of extreme maleness, to the exclusion of certain other major current perspectives in terms of the connection between autism and sensory developmental malfunctions, which are not in themselves gender-specific and which cascade through the higher faculties. The emphasis on the ultra-maleness approach is no doubt attributable to the fact that Baron-Cohen works mainly with higher functioning autism and Asperger's syndrome but throws, I think, less light on more profoundly affected conditions, including those effectively precluding the use of language.

This is of course a tangential criticism. Baron-Cohen has not written a summa autistica, but he has very lucidly outlined one strand in the emerging approach to this highly complex constellation of problems. And it is important that, while those with profound autism obviously stand in need of major intervention, many of those with the higher functioning form of the syndrome effectively go undiagnosed and suffer deeply and unnecessarily from the consequent impairment of their expectations. Since this range of autism may affect as many as 10 per cent of the male population, Baron-Cohen's book and his admirable work in Cambridge in itself highlights a social issue which has been too long kept in the dark and represents a call for openness and an end to denial.

The fact, dear reader, that you have chosen to read a review on a scientific subject in itself heightens the possibility that you may be in some way affected by autistic symptoms. These may not be devastating, but they may well be restricting and lifediminishing. A person who detects autistic tendencies in his make-up will not find himself offered a miracle cure (yet), but he will at least come to terms with his own weaknesses and realise the source of what may otherwise seem merely random limitations. Such a gain in self-understanding would obviously be valuable for anyone, but there must still be many able young people who find it perplexingly hard to integrate with their peer groups or establish purposive long-term projects and who would gain immeasurably more if they were diagnosed as affected by the milder forms of a pervasive condition. For anyone embarking on such an investigation, The Essential Difference would provide an authoritative and humane point of departure.

The management of the higher functioning forms of autism is a major social problem, to which Baron-Cohen has made a perceptive, magisterial and compelling contribution in this book. We do not know what the angels think about the autistic spectrum, but we can be sure that the Professor of Developmental Psychopathology at Cambridge is on their side.