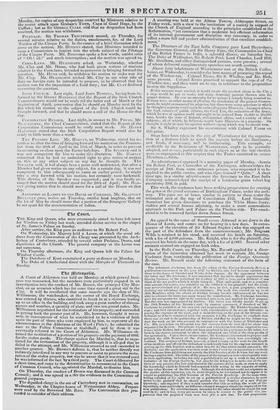 THE King and Queen, who were erroneously stated to have left town for Windsor on Friday last week, attended divine service in the chapel of St. James's Palace on Sunday.

After service, the King gave an audience to Sir Robert Peel. On 1Vednesday, his Majesty held a Levee, at which the usual ad- dress from the Convocation of the Clergy was presented by the Arch- bishop of Canterbury, attended by several other Prelates, Deans, and dignitaries of the Church. The general company at the Levee was not numerous.

On Thursday afternoon, the King and Queen left the Palace for Windsor Castle.

The Dutchess of Kent entertained a party at dinner on Monday. The Duke of Cumberland dined with the Marquis of Thomond on Sunday.