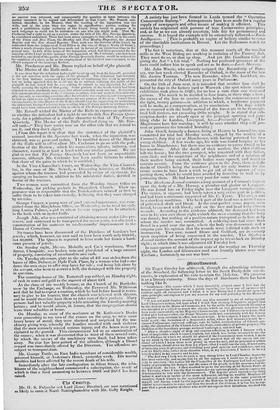 Mr. G. S. Foljambe and Lord Henry 13entinek are now mentioned as likely to contcst North Nottinghamshire with Mr. Golly Knight. A society has just been formed in Leeds termed the " Operative s Conservative Society." Arrangements have been made for a regular supply of newspapers and other means of making it efficient. society has originated with persons of true Conservative principles; and, as far as we can already ascertain, bids fair for permanency and success. It is hoped the example will be extensively followed.—.Leeds Infelligencer. [This is probably an engine of bribery similar to some of the charitable institutions in Bristol. Let the Reformers watch its proceedings.] The fact is notorious, that at this moment nearly all the woollen mills in the West Riding are working in violation of the Factory Act. They must do so, or shut up shop. And yet Mr. Goulburn talks of giving the Act " a fair trial." Nothing but profound ignorance of the facts could induce him to speak and act as he does.—Leeds Mercury.

Mr. John Wastie, who recently resigned the Recordship of Rom- sey, was last week elected Recorder of Oxford, in the room of the late Mr. Justice Taunton. The new Recorder, when Mr. Lockhart, re- presented the city of Oxford many years in Parliameat.

On the 11th of June next, it is intended that another lion shall be baited by dogs in the factory yard at Warwick (the spot where similar exhibitions took place in 1826), for no less a sum than one thousand guineas. The match to be decided in four heats, at three dogs a heat ; the owner of the lion to receive down, before the commencement of the fight, twenty guineas--in addition to which, a handsome payment will be made, as a compensation, at its conclusion. The dogs tt Melt are to contend with the lordly animal of the forest are to be thorough- bred hull terriers, not. exceeding 281bs weight. It is stated tl.at sub- scription-books are already open at the principal sporting and gam- bling clubs in London, Liverpool, &c.—Prorincial Paper. [The Magistrates have fair warning; it will be seen whether they will pre- vent or patronize the intended brutality.]

John Orrell, formerly a farmer, living at Heaton in Lancashire, was committed for trial last Monday week, charged by the verdict of a Coroner's Jury that sat at Manchester, with having poisoned his two young children. A few weeks ago, his wife was found harigitar in his house in Manchester ; but there wits no evidence to prove Orrell to be her murderer. After the death of their mother, the elder children left the house ; but the two youngest, who remained with their father, soon died ; and the suspicions of the neighbours and of a relation of their mother being excited, their bodies were opened, and found to contain arsenic. From the evidence given to the Jury, there is little doubt of Orrell's being the murderer ; but his only motive for the crime seems to have been a wish to get rid of the expense of sup- porting them, which he could have avoided by deserting as well as by poisoning them. He had been very poor for some time.

The Sherborne Journal contains along account of a Coroner's inquest upon the body of a Mr. Harvey, a plumber and glazier at Issitgport. Ile was found late on Friday night near the Langport turnpike-sate. The victim, it appears, had lately taken a very aeuve part in ',elides, and had been a strenuous supporter of Mr. C. Tynte. The course was in a shocking condition. The beck part of the head was a mawd mass of pulverized skull and blood. In the coat-pocket some papers were found, besmeared with blood; and on the face and head were sisteen wounds. According to the evidence adduced, the deceased heen seen in his own cart about eight o'clock the same evening that the body was found ; but nothing of a positive nature transpired as to how or by whom the murder was committed. A soldering-iron had since been found in a pond near the spot, where the body was discovered, and a surgeon gave his opinion that the wounds were inflicted with such an instrument. Two men, named Hoare and Goddard, are in custody upon suspicion of being concerned in the murder. The Shcrhorne Journal carries the account of the inquest up to ten o'clock on Monday night ; at which time it was adjourned till Tuesday last.

In consequence of the boisterous state of the weather on Thursday night, the London and Gloucester mail was literally blown over near Ensham ; fortunately no one was hurt.