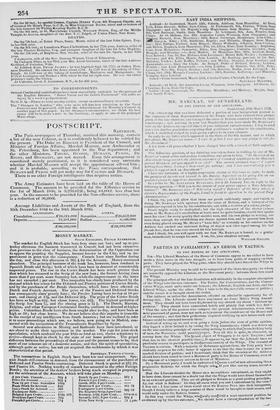 The Paris newspapers of Thursday, received this morning, contain a list of the new Cabinet, as it is confidently believed to be settled for the present. The Duke DE BROGLIE is President of the Council, and .Minister of Foreign Affairs ; Marshal MArsoN, now Ambassador at St. Petersburg, has been appointed to the War department ; and the other Ministers, Tilt RS, Gul'LOT, Hi:MANN, PERSIL, De RIGNY, and DueliaTEL, are not moved. Even this arrangement is considered merely provisional, as it is considered very uncertain whether Marshal MATSON will accept the appointment offered him ; and it is probable, according to the Times correspondent, that IIUMANN and PERSIL will yet make way for CALNION and DUMONT.

There is no other Foreign intelligence that requires notice.