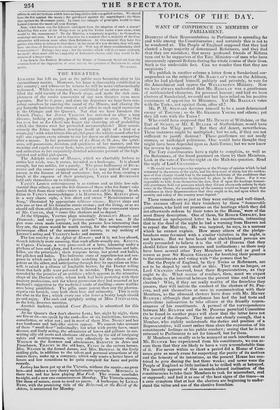 WANT OF CONFIDENCE IN MEMBERS OF PARLIAMENT.

DISTRUST of their Representatives in Parliament is spreading far and wide among the Constituencies ; and certainly this is not to

be wondered at. The People of England supposed that they had elected a large majority of determined Reformers, and they find that they arc mistaken; that many professed friends of Reform turn out to be supporters of the Tory Ministry—of men who have strenuously opposed Reform during the whole course of their lives. Such is the undeniable fact. Can we wonder then that they are suspicious ?

We publish in another column a letter from a Sunderland cor- respondent on the subject of Mr. BARCLAY'S vote on the Address,

after he had pledged himself, publicly and privately, to vote for

the Amendment and oppose the WELLINGTON Ministry. Now we have always understood that Mr. BARci.xv was a gentleman

of unblemished character, for personal honour ; and had we been electors of Sunderland, we could not but have relied on his positive assurances of opposition to Ministers. Yet Mr. BARCLAY votes with the Tories, not against them, after all !

Mr. P. M. STEWART declares himself to be a most determined enemy of Toryism ; so do Mr. GEORGE YOUNG and others; yet they all vote with the Tories !

Who could have supposed that Mr. BENETT of Wiltshire, or the Earl of SL7RRY, or Mr. E. BULLER of StallOrdshire, would have deserted the Whig party ? But they did desert, nevertheless. These instances might be multiplied ; but we ask, if they are not sufficient to justify distrust? These gentlemen are not needy scamps, or unfledged politicians. One would have thought they might have been depended upon as Anti-Tories; but we now know the reverse by experience. The Tory constituencies have a right to complain, as well as the Reformers, of the fraud practised on them by their Members. Look at the vote of Tuesday night on the Malt-tax question. Read the-reply of Lord Cit ANDOS- " lie could not but express his surprise at the Change of opinion which he had witnessed in the course of the night, and his deep sense of alarm lest the sudden- ness of that change should lead to the complete forfeiture of the confidence that the country might otherwise be disposed to place in the House. For it was impossible to hide from themselves the fact, that if upon the hustings honour- able:gentlemen held out promises which they did not afterwards redeem by their votes in the House, the constituency of the country would no longer place that confidence in their Representatives that they ought to do, and upon which the security and safety of the country must depend."

These remarks are as just as they were cutting and well-timed. The excuses offered for their treachery by those "honourable gentlemen, who held out promises on the hustings which they did not afterwards redeem by their votes in the House," were of the most flimsy description. One of them, Sir ROGER GRESLEY, has addressed an apologetical letter to his constituents, intimating that in the dead of the night he had a warning from Heaven not to repeal the Malt-tax. He was inspired, he says, in a manner which he cannot explain. How many others of the pledge- breakers were favoured with a similar visitation in the night, is not known. But we have heard that slackbrained persons are easily persuaded to believe it is the will of Heaven that they should follow their own interests and inclinations ; so there may have been several other Tory Members who had as good a reason as poor Sir ROGER GRESLEY for breaking their promises to the constituents and voting with " the powers that be." But the People of England, be they Tories or Reformers, are not to be duped by such stuff as this. They can no longer, as Lord CHANDOS observed, trust their Representatives, as they ought to do. What course of conduct, then, must we expect from them in the interval between the present time and the next election ? Why, if they are really worthy of the franchise they possess, they will imitate the conduct of the electors of St. Pan- cras, and put themselves at once in communication with their Members, as the aforesaid electors have done with Mr, HENRY BuLsvER; although that gentleman has had the bad taste and marvellous indiscretion to take offence at the friendly remon- strances of his constituents. A perusal of the correspondence between Mr. BULWER and the St. Pancras parochial Committee (to be found in another page) will show that the latter have not the worst of the dispute. They make out clearly enough, that a Member, who rightly understands the duties and position of a Representative, will court rather than shun the expression of his constituents' feelings on his public conduct ; seeing that he is not returned to Parliament to act for himself, but for them.

If Members are so silly as to be annoyed at such interference as Mr. BULWER has experienced from his constituents, we can as- sure them that they are likely to have a very uncomfortable time of it. For never within so short a period did a House of Com- mons give so much cause for suspecting the purity of its motives and the hOnesty of its intentions, as the present House has con- trived to give during the last three weeks; and never were the People of England so little inclined to be trifled with or betrayed. We heartily approve of this so-much-abused inclination of the constituencies to take their Members to task for misconduct, real or supposed; and hail it as one of the best signs of the times—as a sure symptom that at last the electors are beginning to under- stand the value and use of the elective franchise.