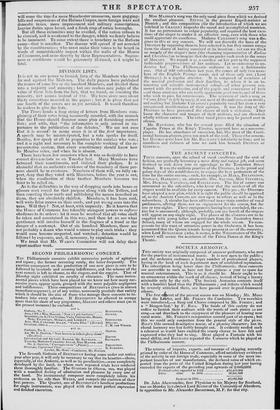 IT is not in our power to furnish lists of the Members who voted for and against the Malt-tax. The daily papers have published the names of some five or six hundred Members, and divided them into a majority and minority ; but our readers may judge of the value of these lists from the fact, that we found, on counting the minority, 259 names instead of 192. We have since seen about thirty corrections inserted in the papers ; but it is plain that not one fourth of the errors are as yet rectified. It would therefore be useless to give the lists.

The Times heads a long string of letters from Members com-

plaining of their votes being incorrectly recorded, with the remark that the House should discover some plan of furnishing correct lists ; and adds, that " the information is only second in im- portance to the publication of the debates." We are not sure that it is second: in many cases it is of the first importance. A speech may be misinterpreted, but a vote speaks for itself. Besides, few speak at all in proportion to the number who vote ; and it is right and necessary to the complete working of the re- presentative system, that every constituency should know how its Member votes, and when he is absent.

correct division-lists as on Tuesday last. Many Members have betrayed their constituents, and violated their pledges. It is shameful that no authentic evidence of the treachery of these per- sons should be in existence. Numbers of them will, we fully ex- pect, deny that they voted with Ministers, before the year is out, when the recollection of their brother Members becomes too faint to be relied on.

glasses sent round for that purpose along with the Tellers, and then counting those cards and publishing the names inscribed on them, they are absolutely childish. Members, it has been said, will write false names on their cards, and put wrong ones into the urns. Will they ? Not, at least, with impunity. Be it known that the House of Commons has tolerably stringent powers to enforce obedience to its orders: let it once be resolved that all votes shall be taken and ascertained in this way, and then let us see what gentleman will involve himself in the disgrace of a fraud or the danger of a contempt. Out of six hundred Members, there are riot probably a dozen who would venture to play such tricks : they would soon become suspected, and watched ; detection would be followe l by exposure, and, if, necessary, by expulsion. We trust that Mr. WARD'S Committee will not delay their report another week.