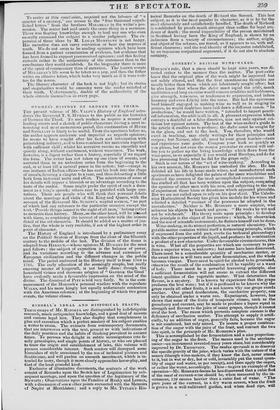 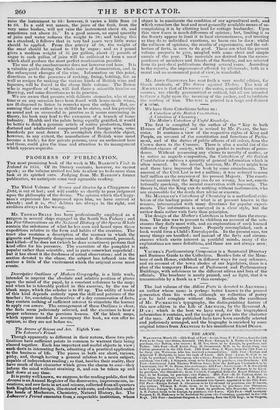 HORACE'S rule, that a piece should be kept nine years, was di- rected rather to the manner than the matter. The poet-critic knew that the original plan of the work might be improved but not safely altered, and that the first spontaneous thoughts are mostly better than those which are laboriously sought after; but he also knew that where the dulee must equal the utile, much meditation and long exercise would remove crudities and feebleness, give strength, terseness, or tenderness to expression, and infuse harmony and even felicity into the verse. But had the epicurean bard himself engaged in making wine as well as in singing its praises, he would doubtless have laid down a different canon. " In productions," he would have written, " intended to impart practi- cal information, the utile is all in all. A pleasant expression which conveys a doubtful or a false direction, sins not only against cri- ticism but against nature. The test of the wine-maker's guide is the article it enables us to produce; the duke must be sought for in the glass, and not in the book. You, therefore, who would excel in teaching, may study writings for their principles and recipes ; bur Nature, after all, must be your great teacher—taste and experience your guide. Compose your book as quickly as you please, but not even the nonum prematur in annum will suf- fice you to gather up the living knowledge which flows from the wine-press, more especially if you would rival Bacchus, and do for

less promising fruits what he did for the grape only." •

Such is our notion of the " art of wine-making." According to his own account, Mr. ROBERTS has embodied the idea. He has dabbled all his life in home-made wines, and manufactured such specimens as have delighted the palate of the mere winebibber and deceived the acumen of the most accomplished connoisseur. He has studied all that has been written upon the subject, come tiring the opinions of other men with his own, and subjecting to the test of experiment those hints or directions which appeared plausible. But we are not called upon to rely on his ipse dixit. The Caledo- nian Horticultural Society has given him medals for his wines and solicited a detailed "account of the processes he adopted in the manufacture." Neither is Mr. ROBERTS a mere empiric, who achieves his objects by knack and guess. " He works by wit and not by witchcraft." His theory rests upon principle : to develop this principle is the object of his practice ; which, by observation and the use of scientific instruments, he flatters himself can be done.

Wine-making, in its utmost perfection, is natural chemistry. Ve- getable matter contains within itself a fermenting principle, which if expressed from the solid part, works (in technical phraseology) with the other properties of the liquid, and produces by combination a product of a new character. Under favourable circumstances, this is wine. What all the properties are which are necessary to pro- duce a superior wine, is unknown; but some have been discovered. There must be a considerable quantity of saccharine matter, or the sweet there is will turn sour after fermentation, and the whole becomes vinegar. There must be spirit for alcohol to be generated, otherwise the result of the combination will be vapidity or a want of body. There must be a powerful leavening principle, else a sufficient fermentation will not ensue to extract the different latent qualities of the vegetable matter. What determines the flavour, is a mystery. It is known by experience that the grape produces the best wine; but if it is professed to be known why the grape excels all other fruits, it is not known why one grape excels another. One grand desideratum, the saccharine property, can only be obtained under a warm sun. Experiment, however, has shown that some of the fruits of temperate climes, such as the gooseberry and currant, may be made to produce a liquor equal in strength and flavour to the juice of many grapes, though it cannot rival the best. The cause which prevents complete success is the deficiency of saccharine matter. The attempt to supply it artifi- cially, by an addition of sugar, generally fails, because the sugar is not combined, but only mixed. To insure a proper combina- tion of the sugar with the juice of the fruit, and convert the two into spirit, is the principle of Mr. ROBERTS'S plan. This is accomplished by due fermentation and a nice proportion- ing of the sugar to the fruit. The means used is the saccharo- meter—an instrument invented many years since, but considerably improved by Dr. Thomesox. The modus operandi is to discover the specific gravity of the juice, which varies with the nature of the season (though wine-makers, if they know the fact, never attend to it, but in wet or dry, hot or cold, invariably put the usual quan- tity of sugar and water, as per receipt), and then apply the sugar, or rather the water, accordingly. Thus—togive an example of the operation—Mr. ROBERTS deems ho has discovered that a cubic foot of the must of currant-wine should be, when measured by the in- strument, 120 ounces heavier than a cubic foot of water. "The pure juice of the currant, in a dry warm season, when the fruit is grown in a well-cultivated garden, and when dead ripe, will raise the instrument to GO: however, it varies a little from 50 to 60. In a cold wet season, the juice of the fruit, from the very same bushes, will not raise the instrument above 40, and sometimes not above 35." In a good season, an equal quantity of juice and water reduces the weight to 30; and taking this as a standard, it follows that in very bad years very little water should be applied. From this gravity of 30, the weight of the must should be raised to 120 by sugar; and as 1 pound gives a medium weight of 35 per gallon, about 21 pounds of sugar to each gallon of juice will be sufficient to to rin a must which shall produce the most perfect combination possible. The use of the saccharometer does not however end here. It is a valuable guide during the whole course of fermentation, and in the subsequent changes of the wine. Information on this point, directions as to the processes of racking, fining, bottling, &c. as well as recipes for making the various kinds of British wine and liqueurs, will be found in the cheap little volume. The Briton who is regardless of wine, will find there a scientific treatise on Brewing, and some directions as to its practice.

We are aware that persons with delicate stomachs, who at any time or on any occasion have been dosed with home-made wines, are ill-disposed to listen to remarks upon the subject. But, as- suming that our author is as skilful as he states, and his principle as sound and as successful in practice as it seems convincing in theory, his book may lead to the extension of a branch of home industry. Health and the palate being equally gratified, it would be better to drink a genuine article of native production, than a doctored and adulterated compound ycleped foreign wine, some hundreds per cent. dearer To accomplish this desirable object, however, to any extent, the manufacture of British wine must become a trade ; for few private persons, save an enthusiast here and there, could give the time and attention to its management which appears requisite.