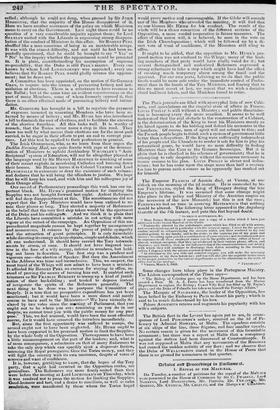 Page 2, 14 March 1835 — The Paris journals are filled with apocryphal lists of new
Close

The Paris journals are filled with apocryphal lists of new

Cabi- nets, and speculations on the singular state of affairs in France. Louis PIIILIP is still without a Ministry; and public dissatisfac- tion is becoming every day more manifest. It seems to be well understood that the real obstacle to the construction of a Cabinet, is the determination of the King to treat his Ministers merely as his hired agents to do his bidding and defend his measures in the -Chambers. Of course, men of spirit will not submit to this; and the French people begin to think such a system of government little better than a despotism. If the King were sufficiently independent of his people and the Chambers to render it safe for him to play his autocratical game, he would have no more difficulty in finding Ministers than the Czar or the German Sovereigns. But it is plain that he is checked in his schemes of government; that lie is attempting to rule despotically without the resources necessary to insure success to his plan. Louis PHILIP is clever and indus- trious; but he has come upon the stage more than half a century too late to pursue such a course as he apparently has marked out for himself.