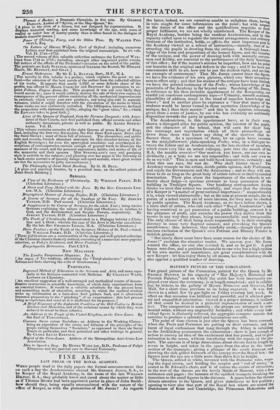 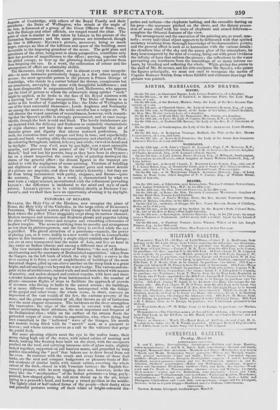 HATTER'S PICTURE OF THE CORONATION.

THE grand picture of the Coronation, painted for the Queen by Mr. GEORGE HAWES. in his capacity of " Her Majesty's Historical and Portrait Painter," and on which the artist has been incessantly em- ployed ever since the ceremony, is at length completed ; and is exhibit- ing, by tickets, in the gallery of Messrs. HonesoN and GRAVES, Pall Mall, for a short time previous to its being engraved. It was first shown to a select few by gas-light on Friday evening last week. Its eft'ect on that occasion was brilliant and powerful, and it elicited gene-

ral and unqualified admiration : viewed at a proper distance, it realized all that could be desired in a pictorial representation of such a sub-

ject. The composition is masterly ; the groups are arranged in cere- monial order, without any ungraceful formality; and while every huh- vidual figure is distinctly relieved, the aggregate compose masses that combine to produce a splendid and harmonious enseuabk. The point of time chosen is just after the Queen has been crowned, when the Peers and Peeresses are putting on their coronets, and the

burst of loyal enthusiasm that rang through the Abbey is subsiding

as the Archbishop pronounces the exhortation: there is just enough of action to convey an idea of the excitement that has passed, and to give

animation to the scene, without interfering with the repose of the pic-

ture. The canvass is of large dimensions, about eleven feet in length by seven in height, and takes in the space from the altar to the inter-

section of the transepts ; giving a glimpse of the south transept, and showing the rich gilded fretwork of the canopy over the Royal box : the figures near the eye are a little Inure than three feet in height.

The Queen, attired in white, invested with the Dalmatie robe, wear- ing the regal crown, and holding the sceptre and " rod of mercy." is

seated in St. Edward's chair, and is of course the centre of attraction; in the rear of the throne are the lovely Maids of Ihmour, with a few noblemen and pages ; the banners of the uplifted trumpets breaking the transition to the small figures in the distance. A space before the throne directs attention to the Queen, and gives stateliness to her position ; opening to view also that part of the Royal box where are seated the Dutchesses of Kent and Cambridge, the Princesses Hohenlohe and Avesta of Cambridge, with others of the Royal Family and their attendants : the Duke of Wellington, who stands at the angle of the box, is foremost of a group of the Great Officers of State ; who,

with the Bishops and other officials are ranged round the altar. The point of view is similar to that taken by LESLIE in his picture of the Coronation Sacrament ; and the same persons are introduced, though the time is different; HATTER'S picture, moreover, being so much larger, conveys an idea of the loftiness and space of the building, more

favourable to the imposing grandeur of the scene. The gold plate and splendours of the altar, being seen in sharp perspective, contribute only their due portion of magnificence to the effect ; serving, together with the gilded canopy, to bear up the glittering details and prevent them from fatiguing the eye. In a word, the collocation of colour and the arrangement of effect are admirably skilful. The likenesses, sixty in number, are in almost every case recogniz- able-in some instances particularly happy, in a few others quite the reverse: the most agreeable person in the picture is Prince George of Cambridge, who stands in a corner behind the throne, conspicuous but not prominent, surveying the scene with thoughtful indifference ; and the most disagreeable is unquestionably Lord Melbourne, who appears just the kind of person to whom the aristocratic slang epithet " snob" might be applied, as he looks in the face of his Royal mistress with knowing leer of familiar recognition. The Duke of Sussex is as unlike as his brother of Cambridge is like; the Duke of Wellington is one of the least successful likenesses ; Lords Anglesea. and Normanby are among the most so ; though the noble novelist has a vulgar air. We will dismiss the vexed question of resemblances, however, with remark- ing that the Queen's profile is strongly pronounced, and at once recog- nizable, though the look is cold and fixed. The lovely trainbearers are not depicted with the delicacy and freshness so eminently characteristic of virgin charms ; nor have the more matronly beauties that air of

feminine grace and dignity that adorns matured perfections. In truth, the carnation tints are opaque and foxy in tone, and superficially smooth and hard, wanting alike the transparency and elasticity of flesh : the colouring throughout, indeed, is heavy and crude, viewed in detail and by daylight. The coup teceil, seen by gas-light, was a most agreeable surprise, and proved that the painter of the "Trial of Lord William Russell," had not lost his powers, long as they have been in abeyance ; but on a closer inspection the coarse style of painting destroyed the charm of the general effect : the distant figures in the transept are dabbed in with the negligence of scene-painting. Freedom of handling and slightness of execution in the remoter parts and minor details of a picture are requisite, and show the artist's dexterity ; but they are far from being inconsistent with purity, elegance, and finesse-quite the contrary. The picture, in a word, is aaracterized by what we must term a vulgar manner, as contrasted with the refinement pervading LESLIE'S : the difference is incidental to the mind and style of each painter. Li;siaE's picture is to be exhibited shortly at DOMINIC COL- NAGIII'S, and we shall then have an opportunity of seeing it by daylight.