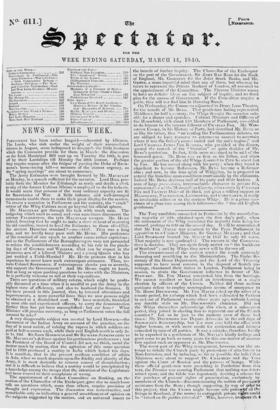 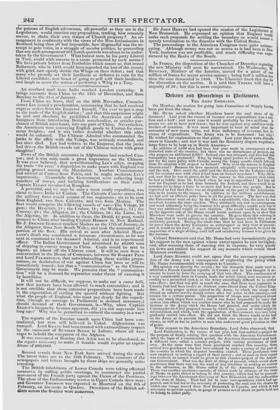 Page 1, 14 March 1840 — The Tory candidate succeeded in Perthshire by the overwhelm- ing
Close

The Tory candidate succeeded in Perthshire by the overwhelm- ing

majority of 458, obtained upon the first day's poll; when the retirement of the Whig prevented the majority front beim-, in- creased, perhaps to (300 on the second day. It vill be remembered that Mr. Fox 2,LAULE Was returned to the PEEL Parliament in opposition to a Cabinet Minister, Sir GEOEGE MURRAY; and that Lord STORMONT headed Mr. Mst-Ls: in 1837 by only 85 votes. That majority is now quadrupli. The success or the Conserva- tives is decisive. They are again firmly seated on " the backbone of Scotland"; and by Whigs they never will be thrown off.

The circumstances of the contest render the result extremely damaging and mortifying to the Ministerialists. The Under Se- cretary of the Home Department, and the Lord of the Treasury supposed to have most concern in the disposal of Scotch pa- tronage, abandoned their duties in London, Parliament being in session, to strain the Government influence in favour of Mr. STEWART. Mr. Fox Maims nominated him from the hustings. We cannot recollect so bar-faced an interference at a Sine:" election by officers of the Crown. Neither did these zealous partisans refuse to employ unscrupulous means of annoyance to Mr. HOME DRUMMOND. Mr. Fox Msesu raked up the ashes of a remote period, for a charge which had been exhausted by fictions in and out of Parliament twenty-three years ago, without leaving any durable stain on Mr. Darmstomis character. Did not the Whigs themselves acknowledge this when, at a subsequent period, they joined in electing him to represent one of the Ssotch counties ? Let us be just to the memory even of those bad times : Mr. Daum:nom) was Depute Advocate in the evil days of SinmouTn's Secretaryship, but tiny men ever held the office with higher honour, or with more credit for moderation and fairness conceded by men of all parties. It was a mistake, therefore, hardly to be expected in a gentleman of Mr. MArix's kindly feelings and good sense to go back so many years far this one matter of accusa- tion against such an opponent as Mr. Daummosin.

The worst part of the Whig management, however, was the at- tempt to delude the Church party by professions of attachment to Non-Intrusion, and by induciug, as thy as possible, the belief that Ministers were about to support Dr. Chums:as and the Veto against the Court of Session and the patroas of livings. While these official p;C11110111C11 Were preaching ill Perthshire from this text, the Premier was assuring Parliament that nothing was deter- mined upon; and the Globe was ingeniously devising a scheme for the purchase of patrons' rights of presentation, exclusively by members of the Church—discountenancing the notion of pecuniols assistance from the State; though suggesting, by way of siaer to this project, that the Crown might become sole patrovse all the livings in Scotland, if the money to extinguish private ribiAts could. be "raised on the parties interestul." Who, however, imagines th:.t

the patrons of English advowsons, all-powerful as they are in the Legislature, would sanction any proposition, tending, how remotely soever, to shake their own tenure of Church property ? An ar- rangement in conformity with the views of the Non-Intrusionists in Scotland being thus all but impossible, how disgraceful was the at- tempt to gain votes, in a struggle of secular politics, by pretending that any such arrangemenrof Church quarrels was about to be under-

taken by the Government What honest man, be his party Liberal or Tory, could wish success to a cause promoted by such means ? We have private letters from Perthshire which assure us, that sound Reformers, who in 1835 would have regarded the loss of the county with grief, now openly deride the Whigs on their defeat ; and that many who proudly set their landlords at defiance to vote for the Liberal candidate, now boast of going to poll with their landlords, and laugh to scorn the notion of preferring a Whig to a Tory.