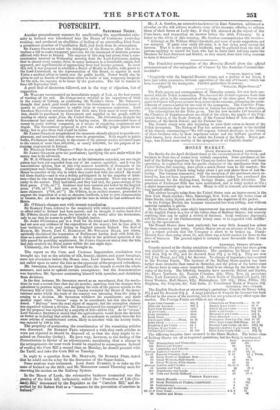 Another precautionary measure for ameliorating the apprehended cala- mity in Ireland was introduced into the House of Commons yesterday evening; and produced an ebullition of feeling of an astounding kind from a prominent member of Conciliation Hall, just fresh from its atmosphere. Sir JAMES GRAHAM asked the indulgence of the House to allow him to in- troduce a bill to make temporary provision for the treatment of destitute persons afflicted with fever in Ireland. 'The urgency of this step had arisen from a com- munication received on Wednesday morning from the Lord-Lieutenant, stall_ ng that in almost every county, fever, in many instances to a formidable extent, had appeared, and apprehensions of approaching fever had become general. To meet this evil, it was proposed to establish a Board of Health in Dublin, with power to the Lord-Lieutenant, on the representation of this Board, to appoint in each Union a medical officer to watch over the public health. Power would also be given to call on Boards of Guardians either to build or hire temporary hospitals for the sick, the expense to be borne by the poor-rates. The bill to remain in force till September 1847.

A good deal of discussion followed, not in the way of objection, but of suggestion.

Mr. WAKLET recommended an immediatate supply of food, as the best means of warding off the evil. Mr. CoLesunoux referred to the experience of 1823 in the county of Galway, as confirming Mr. Wakley's views. Mr. OSBORNE thought that much good would arise were the Government to advance loans of money to railway companies to enable them to commence operations. Lord GEORGE BENTINCK recommended that Irish oats, Irish meat of every descrip- tion should be purchased by Government and supplied to the people, without wailing to obtain maize from the United States. Mr. O'CONNELL thought the Government had acted more wisely in buying maize. He recommended loans of money to assist railway companies' as a means of supplying employment and wages. The Government proposed to give the suffering people physic for no- thing; but to give them food would be better. Sir JAMES GRAHAM recapitulated the measures already adopted to provide em- ployment, and mentioned that others were in preparation. With regard to public works, Parliament had already in the course of the present session advanced loans to the extent of more than 300,0004 or nearly 400,0001., for the purpose of in- creasing employment in Ireland. Mr. Wretztiu SMITH 013BrirS—" How do you make that out ?" Sir JAMES Gitanast gave the particulars; specifying the acts under which the money was to be advanced. Mr. W. S. O'Beres said, that so far as his information extended, not one single guinea had been yet expended from any of the sources specified; and it was his conscientious opinion, that at this very moment hundreds of thousands of his countrymen were famishing. Under such circumstances, did it not become the House to consider of the way in which they could deal with the crisis? He would tell them frankly—and it was a feeling participated in by the majority of Irish- men—that he was not disposed to appeal to their generosity. There was no gene- rosity in the matter. They had taken, and they had tied, the purse-strings of the Irish purse. ("Oh, oh!") Irishmen had been taunted and belied by the English press. ("Oh, oh!") And now, even in that House, he saw something of the same character. ("Oh, oh!") 'Mr. O'Brien, in an excited manner, proceeded to suggest the imposition of a tax on absentee landlords, a law to give compensation to tenants, &c. At last he apologized for the tone in which lie had addressed the House.

Sir ROBERT PEPS. referred to the unanimity with which measures calculated to afford relief to Ireland had been passed; and he thought it rather hard that /tr. O'Brien should come down, two months or six weeks after the discussions, only to say that he scorns to profit by English justice. • Mr. Joan- O'CONNELL put in a word for his friend and fellow Repealer. He had not seen any evidence of-the expenditure of the money; but he was able to bear testimony to the good feeling in England towards Ireland. The Earl of Marren Mr. SHAW Lord C. HAMILTON, Mr. WILLIAM. 1VIILES, and others, spiritedly disclaimed'the imputation of Parliament having dealt with Irish dis- tress as a question of generosity. As to delay in the practical operation of the bills passed for providing employment, Sir JAMES GRAHAM stated that the bills had only received the Royal assent within the last eight days.

Ultimately, the Fever Bill was brought in.

The report on the Corn and Customs Importation resolutions was brought up; but as the articles of silk, brandy, timber, and paper hangings, were not overtaken before the House rose, Lord GEORGE BENTINCK was not called upon to enter the lists as the opponent of the proposed reductions.

Mr. Srooresit, however, threw himself into the breach to resist the whole measure, and next to uphold certain exemptions: but the demonstration was harmless, Mr. Spooner contenting himself with speeches, and shrinking from divisions.

In the first instance, Mr. SPOONER moved as an amendment, that the resolu- tions be read a second time that day six months; asserting that the changes were calculated to produce injury, and assigning the evils of the present system to the Currency BM of 1819. Sir GEORGE CLERK reminded the House of the incon- venience under which the trade of the country was labouring from the delay in coming to a decision. Mr. SPOONER withdrew his amendment; and made another stand when "bronze" came to be considered; but this also he aban- doned. "Buttons" were the next object of support; but the exemption claimed Niss negatived without a division. Mr. Gitooast moved the exemption of "butter"; but the proposal was rejected by a majority of 102-213 to 111. As to "cheese," Lord GEORG.E BENTINCE stated that the agriculturists would deem the decision on butter as including that article also. An amendment to exclude from the list some articles of manufactured cotton, likely to interfere with the hosiery trade, was rejected by 190 to 102.

The propriety of postponing the consideration of the remaining articles was discussed. Sir ROBERT PEEL expressed a wish that such articles as were not objected to should be disposed of, so that the duty might be re- mitted on Saturday (today). He gave way, however, to the feeling of the Protectionists in favour of an adjournment; mentioning that a change in the arrangements for next week would be required in consequence. Instead of reading the Corn Bill a second time on Monday, he should proceed with the Tariff, and take the Corn Bill on Tuesday.

In reply to a question from Mr. Morriar, Sir ROBERT PEEL stated that he could not fix a day for the discussion of the Sugar-duties.

Some motions were intimated. Lord &nix RUSSELL iS to take up the state of Ireland on the 26th; and Mr. MORRISON named Thursday next for renewing his motion on the Railway System.

In the House of Lords, the substantive business transacted was the passing of the Irish bill, technically called the "Protection of Life (Ire- land) Bills" denounced by the Repealers as the "Coercion Bill," and de- scribed by Sir Robert Peel as a "measure for the prevention of murders in Ireland."