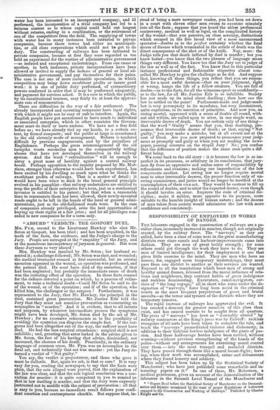 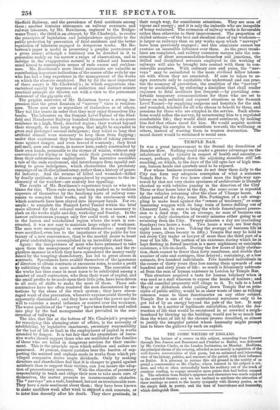 RESPONSIBILITY OF EMPLOYERS IN WORKS OF DANGER.

THE labourers engaged in the construction of railways are a pe- culiar class, immensely increased in number, though not originally created, by the railway furor. The "navveys," as they are called, have been a class of some note in the great manufacturing districts ever since canals and harbour-improvements came into fashion. They are men of great bodily strength ; for none others could get through the work they have to do. They are men of limited intelligence; for their employment is one that gives little exercise to the mind. They are men who have no homes; for, engaged upon temporary undertakings, they must pass from one district to another as their services are wanted. Exposed to all the temptations which beset men of strong and healthy animal frames, released from the moral influence of rela- tions and neighbours, they contract habits of gross indulgence and reckless domineering. Excavators, canal-navigators, car- riers of "the long voyage," all in short who come under the de- signation of "navveys," have long been noted in the criminal courts as the most frequent perpetrators of gross and brutal assaults—as the terror and tyrants of the districts where they are temporary inmates.

The rapid increase of railways has aggravated the evil. It has created a demand for greater numbers of this class than exist, and has caused recruits to be sought from all quarters. The press of " navveys " has been as "damnably abused " by railway contractors as the King's press was by Falstaff: reckless runagates of all sorts have been taken to complete the tale, and teach the " navveys " premeditated violence and dishonesty, in addition to their habitual lawless indulgence of the gusts of pas- sion. And these half-savage hordes have been carried, without warning—without previous strengthening of the hands of the police—without any arrangements for exercising moral control over them — into the most tranquil and secluded districts. They have passed through them like a moral locust-flight; leav- ing, when their work was accomplished, crime and debasement where they found honesty and sobriety. This subject has been taken up by the Statistical Society of Manchester; who have just published some remarkable and in- teresting papers on it.* In one of these, Mr. Robertson, a medical gentleman, gives an account of the demoralization of the labourers in the Summit Level Tunnel of the Manchester and