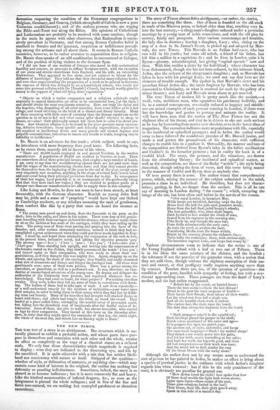 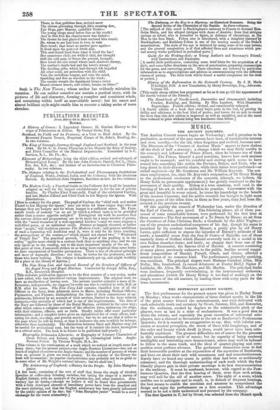 THE true test of a story is an abridgment. The structure which is na- turally planned to exhibit a probable action, and whose parts have pur- pose in themselves and connexion with each other and the whole, retains its effect as completely as the copy of a classical statue on a reduced scale. We only lose those characteristics which magnitude is required to display : even they are indicated to the discerning eye, and felt by the uncritical. It is quite otherwise with a tale that has neither likeli- hood nor consistency with nature or itself. Stripped of the qualities— whether of style or delineation of manners, or anything else—which may sustain some kind of interest in the original, the outline has nothing but deformity or puzzling indistinctness. Sometimes, indeed, the story is so absurd as to become ludicrous ; but it is more commonly flat and heavy. Like the kindred monstrosities of inflated dragons, &c., as soon as the integument is pierced the whole collapses ; and in lieu of the fine and fierce non-natural," we see nothing but crumpled parchment or shrunken caoutchouc. The story of Ti awn almost defies abridgment,—or rather, the stories, there are something like three. One of them is founded on the old st6C11 in trade of the Minerva press, or indeed older than that, reaching very faa into the last century,—a clergyman's daughter seduced under a pretenden marriage by a young man of noble connexions, and with the old plea for secrecy, family and prospects. After various contretemps and troubles, the lady dies in distress leaving a daughter, Lucy ; who, sitting on the step of a door in St. distress; Street, is picked up and adopted by Mor- vale, the new Timon. This Morvale is an Indian half-caste, who has run wild in his youth ; but some old nabob, a friend of his father, has left him a million in a capricious fit ; and he lives in London quite k la Byron—gloomy, misanthropical, but giving "capital spreads" now and then. With him resides a sister by the half-blood ; whose character has been dishonoured, though she has not been seduced, by his intimate friend, Arden, also the seducer of the clergyman's daughter; and, as Morvale has fallen in love with his protégé Lucy, we need not say that here are the elements of trouble enough. The upshot is, that Morvale's sister and his quondam friend Arden die ; the latter forgiven by Morvale, who has been converted to Christianity, or what is received for such by the gallery of a minor theatre ; and Lucy and Morvale seem about to get married. The true Timon of modern life is pretty much like the ancient,—a weak, vain, ambitions man, who squanders his patrimony foolishly, and is, as a natural consequence, eventually reduced to beggary and suicide : nor are actual examples of such persons wanting in London if there were but the knowledge and genius to portray and animate the reality. It will have been seen that the author of The New Timon has not the slightest idea of his theme, and that he is driven to eke out such notions as he has by borrowing from matter now obsolete, even in the lower class of magazines. The execution indicates more acquaintance with life, especially in the incidental or episodical passages ; and in Arden the author would seem to have followed the scandalous practice of Mr. Disraeli junior, and made a real person the groundwork of his character, with sufficient changes to enable him to repudiate it. Ostensibly, the manner and tone of the composition are derived from Byron's tales in the loftier meditations and Crabbe's in the homelier pictures ; but in reality the book is of a twofold kind. The story, the persons, and the situations' are drawn from the circulating library; the incidental and episodical matter, as well as the composition, are those of the flashy "article" ; the style being rhetorical, though taking the form of verse, and this verse being nearer to the manner of Crabbe and Byron than to anybody else.

Of true poetry there is none. The author wants that comprehensive power, which, seizing the essence of the subject submitted to the mind, presents a class in an individual. He describes, but does not charac- terize; getting, in fact, no deeper than the surface. This is all he can say of morning in London during. "the season"; which, excepting the image of the cat, has been often said before in the novels of the season.

"O'er royal London, in luxuriant May, While lamps yet twinkled, dawning crept the day.

Horne from the hell the pale-eyed gamester steals; Home from the ball flash jaded beauty's wheels; The lean grimalkin, who, since night began, Bath hymn'd to love amidst the wrath Of man, Scared from his raptures by the morning star, Flits finely by, and threads the area bar; From fields suburban rolls the early cart; As rests the revel, so awakes the mart.

Transfusing Mocha from the beans within,

Bright by the crossing gleams the alchemic tin,—

There halts the craftsman; there, with envious sigh, The houseless vagrant looks, and limps foot-weary by."

Various circumstances seem to indicate that the writer is one of the Young England school with a leaf or two out of Pelham. There is in his ideas the same mixture of the cloister, and the boudoir ; the tolerance if not the practice of the genteeler vices, with a notion that they are still vices, though without the slightest conception of their na- ture and extent, or that profligacy really requires anything more than lip censure. Touches there are, too, of the question of questions—the condition of the poor, handled with sympathy of feeling, but with a sen- timent approaching cant. These passages are from the death of Luoy's mother, and the last rather exaggerated.

"Behold her by the couch, on bonded knees: There the wan mother—there the last disease !

Dread to the poor the least suspense of health—

Their hands their friends, their labour all their wealth : Let the wheel rest from toil a single sun, And all the humble clock-work is undone.

The custom lost, the drain upon the hoard, The debt that sweeps the fragment from the board.

• • "Dark strangers enter'd in the squalid cell; Rude hirelings placed the pauper in the shell; Harsh voices questioned of the name and age-

Ev'n paupers live upon the parish page. She answers not, or sighs, and smiles, and keeps The same meek language= Hush ! my mother sleeps.' They thrust some scanty pence into her palm, And led her forth, scarce marvelling at her calm;

And bade her work, not beg—be good, and shun

All bad companions—so their work was done; And the wreck left to drift amidst the roar Of the Great Ocean with the rocky shore."

Although the author does not by any means seem to understand the sort of person he has painted in Arden, he makes an effort to bring about a species of poetical justice in the coldness with which Arden's daughter regards him when restored : but if this be the only punishment of the roué, it is obviously too peculiar for general use.

"how Arden loved his child ! how spoke that love Of those dead worlds the light herb waves above; Layer upon layer—those strata of the past, Those gone creations buried in the last !

Their bloom, their life, their glory pass'd away, Speak in this relic of a vesled day.

There, in that guileless face, revived anew The visions glistening through life's morning dew, Fair Hope, pure Honour, undefiled Truth— The young shape stood before him as his youth ! And in this love his chastisement was found— The thorns he had planted here enclosed him round; He, whom to see had been to love, in vain Here loved; that heart no answer gave again— It lived upon the past—it dwelt afar, This new-found bond from what it loved the bar! Her conscience chid ; yet while it chid, her thought Still the cold past, to freeze the present, brought; How loved the sire round whom such shadows throng, The mother's death-bed and the lover's wrong! The dazzling gifts, which had through life beguiled All other souls, are powerless with his child. Vain the melodious tongue, and vain the mind, Sparkling and free as wavelets in the wind; The roseate wreath the handmaid Graces twine Round sternest hearts, soft infant, breaks on thine !"

Such is The New Tinton; whose author has evidently mistaken his vocation. He can neither conceive nor sustain a poetical story, with its pictures of life and character, forming a complete and consistent whole, and containing within itself an unavoidable moral : but his smart and almost brilliant style might enable him to execute a taking series of town sketches.