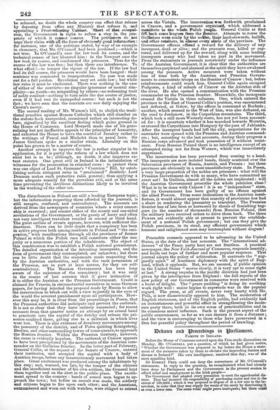 Page 2, 14 March 1846 — Peaceable counsels appeared to be advancing in the United States,
Close

Peaceable counsels appeared to be advancing in the United States,

at the date of the last accounts. The "international ad- dresses" of the Peace party here are not fruitless. A practical newspaper, the New York Journal of Commerce, responds heartily, and holds out hope of further and more popular response. That journal adopts the policy of arbitration. It contrasts the "nig- gardly spirit" of American diplomacy with the spirit of Bug-. land, which it applauds. But, we are assured, if public opinion in the United States "moves slowly, it is very apt to come right at last." A strong impulse in the pacific direction had just been given by the intelligence from England : the full reports of the new policy of our Government in commerce were received with a burst of delight. The "peace pudding" is doing its soothing work right well : maize begins to supersede war in the popular regard. The press, at all events, never very hearty with Mr. Polk, is now diametrically opposed to him. The moderation of English statesmen, and of the English public, had evidently had an instantaneous and powerful effect in strengthening the mode- rate party there, both in its own sense of practicabilities and in its conscious moral influence. Such is the present aspect of the public countenance, so far as we can discern it from a distance ; and the view is encouraging to those who have persevered in a firm but peaceful policy throughout the period of brawling.