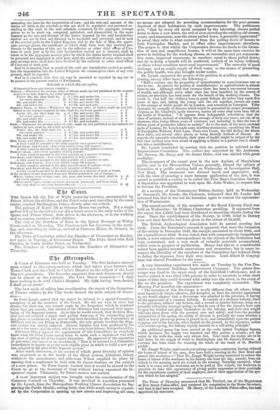 Tam Queen left the Isle of Wight yesterday morning, accompanied by Prince Albert, the children, and the Royal suite; and, travelling by the usual routes, reached Bnekingham Palace shortly after one o'clock. The privacy of Royal life at Osborne House was perfect. Not a single arrival fell to be chronicled; nor did a break occur in the early walks of the Queen and Prince Albert, their drives in the afternoon, or in the walking and equestrian exercises of the children.

The visit of the Dutchess of Kent to the Queen Dowager at Witley Court ended on Thursday. The Dutchess took her departure in the morn- ing, and, travelling by railway, arrived at Clarence House, St. James's, in the afternoon.

The Duke of Cambridge visited the Dutchess of Gloucester on Sunday, and again on Tuesday, at Gloucester House. The Duke dined with Earl Ca.wdor' in South Audley Street, on Wednesday.