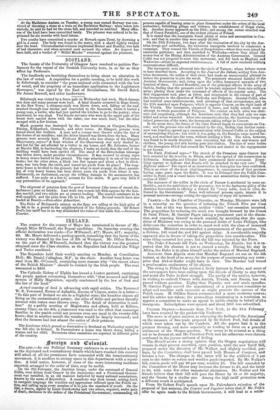 The Senate of the University of Glasgow have resolved to petition Par- liament for the repeal of the Scottish University tests, in so far as they affect lay Professors.

The landlords are bestirring themselves to bring about an alteration in the law of entail. A requisition for a public meeting, to be held this week in Edinburgh, to consider "the great national evils connected with the law of entail, and the propriety of an immediate application to the Legislature thereupon," was signed by the Earl of Breadalbane, Sir David Baird, Sir James Boswell, and other landowners.

Edinburgh was visited by a fierce gale on Wednesday last week. Much damage was done and many persons were hurt. A fatal disaster occurred in Hope Street, in the New Town: a chimney-stalk was blown down, and, falling on the roof, crushed through four stories and descended to the basement, where it buried a young man' a butler, who had just quitted the kitchen to go to the pantry; when extricated, he was dead. Two female servants who were in the upper part of the house were carried down with the ruins; one was much hurt, but the other escaped with a few bruises.

Mach property was destroyed by the same hurricane, at Glasgow, Dundee, Paisley, Kilmarnock, Greenock, and other towns. At Glasgow, persons were tossed about like feathers. A man and a woman were thrown under the feet of the horses of an omnibus; and the driver himself was blown from the box. Many persons were severely hart. Professor Nichol, who has charge of the Glasgow Observatory, says—" A front window of the Observatory was early dashed in; and but for the aid afforded by a visiter in my house, and Mr. Johnston, farmer at Horslet Hill, in barricading the shutters, I make no doubt that the roof of the building would have been carried off. The stand of the Herschelian telescope was blown down, under peculiar circumstances. It was secured by strong ropes to heavy stones buried in the ground. The rope attaching it to one of the stones broke; but the other stone, a block two feet square and about a foot in thick- ness, was torn from the earth, and tossed ten yards from its place! The mag- netic house is levelled to the ground; but what is most strange, its floor, consist- ing of very heavy beams, has been driven some six yards from where it was. Fortunately, no instrument, except the trifling damage to the anemometer, has suffered. I am quite at a loss to account for this storm. It gave very little if any premonition of its approach."

The shipment of potatoes from the port of Inverness [the scene of recent dis- turbances] goes on briskly. Last week two vessels left with cargoes for the Len- don market, and two others are at present loading The market continues to be well supplied, and the price from 12s. to 14.s. per boll. Several vessels have also loaded at Beanly.—Ross-shire Advertiser.

The Duke of Richmond's salmon on the Spey are selling at the high price of 2s. 6d. to 3.e. a pound in the neighbourhood of the fishing-grounds. Sir Robert Peel's late tariff has in no way diminished the value of this noble fish.—Inverness Courier.