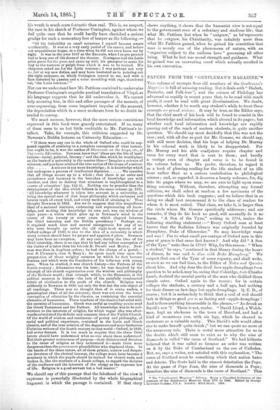 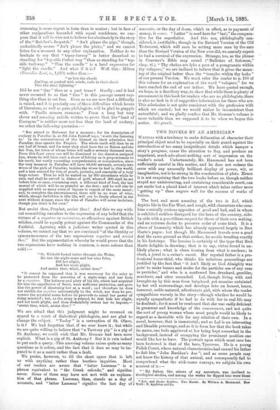 PAPERS FROM THE " GENTLEMAN'S MAGAZINE."

Tins volume of excerpts from old numbers of the Gentleman's Maga:lite is full of amusing reading. But it deals with" Dialect, Proverbs, and Folk-lore "; and the science of Philology has advanced so rapidly in recent years that, to be read with much profit, it must be read with great discrimination. We doubt, however, whether it be worth any student's while to treat these excerpts an grand serieu.v. It may be true, as the Editor says, that the chief merit of his book will be found to consist in the local knowledge and information which abound in its pages ; but whether such local information and knowledge are rapidly passing out of the reach of modern students, is quite another question. We should say most decidedly that this was not the case ; and, with all due re.pect for Mr. Gomme, we should say, with still more decision, that his hope of helping Dr. Murray in his colossal work is likely to be disappointed. For Dr. Murray and his able coadjutors require chapter and verse for every word that is sent to them ; and hardly a vestige even of chapter and verse is to be found in the volume before us. We prefer, therefore, to regard it as a book of pleasing reading for the idle student of an idle hour rather than as a serious contribution to philological science ; and, so regarded, it deserves a hearty welcome, for, dig into its pages where we may, we are sure to light upon something amusing. Without, therefore, attempting any formal criticism, we shall select at random a few specimens of the questions which this book suggests ; and we believe that in so doing we shall best recommend it to the class of readers for whom it is most suited. That class, we take it, is larger than the circle whom Mr. Gomme specifically addresses ; and our remarks, if they do his book no good, will assuredly do it no harm. "A Son of the Tyne," writing in 1794, makes the following startling statement :—" Every Oxford man at least knows that the Bodleian Library was originally founded by Humphrey, Duke of Gloucester." So may knowledge wane and wax ! For to what small per-centage of Oxford men in this year of grace is that same fact known ? And why did " A Son of the Tyne " write thus in 1794 P Why, for this reason : " When a student," he says, "continued in that library during the hours of dinner, he was said to dine with Duke Humphrey." We suspect that son of the Tyne of some roguery. and shall write, as soon as we can find time, to the Editor of Notes and Queries about him. And why does the devil love apple-dumplings ?—a question to he asked, may be. seeing that Coleridge, taste Charles Lamb, doubted the mental purity of the man who disliked those simple cates. Oxford again to the rescue ; for in certain colleges the students, a century and a half ago, had nothing for their dinner on fast-days but apple-dumplings. Q. E. D., of course ; but it is melancholy to think that a soul of evil should lurk in things so good per se as fasting and—apple-dumplings ! And is there anything treasonable in the phrase,—" As drunk as David's sow "? There is not, reader. " David Lloyd, a Welshman, kept an ale-house in the town of Hereford, and had a kind of monstrous sow, with six legs, which he showed to customers as a valuable rarity. This David's wife would often rise to make herself quite drunk ;" but we can quote no more of the unsavoury tale. There is metal more attractive for us in the doubts which still seem to exist as to why the nine of diamonds is called "the curse of Scotland." We had hitherto believed that it was called so because an order was written on it by the Duke of Cumberland on the eve of Calloden. But, no, says a writer, not satisfied with this explanation, "The curse of Scotland mast be something which that nation hates and detests. The Scots held in the utmost detestation the Pope. At the game of Pope Joan, the nine of diamonds is Pope ; therefore the nine of diamonds is the curse of Scotland." This

reasoning is more cogent in form than in matter ; but in face of other explanations hazarded with equal confidence, we suppose that it will be wise not to believe too obstinately in the story of the "Butcher's despatch." " An% please the pigs," though, undoubtedly means " An't please the pixies," and we cannot listen for a moment to any other explanation. Neither do we hesitate to say that " topsy-turvey " is better described as standing for "top-side t'other way " than as standing for "topside turf-way." " Tine the candle " is a local expression for "light the caulk." And what if it is ? Well this : Milton (Paradise Lost, x., 1,073) writes thus :

" as late the clouds Jostling, or pushed with winds, rade in their shock Tine the slant lightning."

Did he use "tine" then as a past tense ? Hardly ; and it had never occurred to us that " tine" in this passage meant any thing else than to set free. Even so we see now that a difficulty is raised, and it is precisely one of those difficulties which lovers of literature, as well as pure philologists, will be glad to grapple with. "Paullo minors canamus." From a long but very clever and amusing article, written to prove that 'the "land of Coccayne " is neither more nor less than the land of cookery, we select the following quotation :

" But attend to Ifahomet for a moment; for his description of cookery in Paradise is, as Sir John Falstaff says, worth the listening to.' In the entertainment of the blessed on their admission into Paradise, thus speaks the Prophet. The whole earth will then be as one loaf of bread, and for meat they shall have the ox Balam and the fish Nun, the lobes of whose livers will suffice seventy thousand men. From this feast every one will be dismissed to the mansion assigned him, where he will have such a share of felicity as is proportionate to his merit, but vastly exceeding comprehension or computation, since the very meanest in Paradise will have 80,000 servants, seventy-two wives of the girls of Paradise, besides the wives he bad in this world, and a tent erected for him of pearls, jacinths, and emeralds of a very large extent. Then he will be waited on by 300 attendants while he eats, and shall be served in dishes of gold, whereof 300 shall be set before him at once, containing each a different kind of food, the last morsel of which will be as grateful as the first ; and he will also be supplied with as many sorts of liquors in vessels of the same metal; and, to complete the entertainment, there will be no want of wine, whiob, though forbidden in this life, will yet be freely allowed in the next without danger, since the wine of Paradise will never inebriate, though you drink it for ever."

But aroint thee, Prophet, aroint thee ! And this we say without committing ourselves to the expression of any belief that the virtues of a royntree or rowantree, so efficacious against British witches, could be equally potent against the Commander of the Faithful. Agreeing with a judicious writer quoted in this volume, we cannot say that we are convinced "of the identity or

synonymousness of the two expressions royntree and aroint thee." But the argumentation whereby he would prove that the

two expressions have nothing in common, is more solemn than solid :—

"St. Withold footed thrice through the Woles, He met the night-mare and her nine foles, Bid her alight, And her troth plight, And aroint thee, witch, aroint thee."

"It cannot be supposed that it was necessary for the saint to be protected from the sorceries of a night-mare and her fools by a royntree. The holiness and piety of his life, which had acquired for him the appellation of Saint, were sufficient protection, and gave him the power of disarming her at a word ; and therefore he does not exhibit the royntree substantially to the witch, nor does be pronounce the mystical name before he proceeds to annul her power of doing mischief ; but, as the story is related, he first bids her alight, and her troth plight, and then disdainfully orders her to begone,— aroint thee, witch, aroint thee!' "

We are afraid that this judgment might be reversed on appeal to a court of dialectical philologists, and are glad to change the subject. " Tooley " is a corruption of St. Olave, is it ? We had forgotten that, if we ever knew it ; but while we are quite willing to believe that "a Tantony pig" is a pig of St. Anthony, we could wish that Mr. Gomme had been more explicit. What is a pig of St. Anthony ? But it is vain indeed to put such a query. -This amusing volume raises quite as many questions as it solves, and the fact that it does so may be imputed to it as a merit rather than a fault.

We prefer, however, to fill the short space that is left us with anything rather than bootless inquiries. Most of our readers are aware that "latter Lammas" is a phrase equivalent to " the Greek calends," and signifies never. Some of them may have not met with an explana tion of that phrase. Lammas, then, stands as a day of accounts, and "latter Lammas" signifies the last day of accounts, or the day of doom, which in effect, as to payment of money, is never. "Latter" is used here for "last," the compara tive for the superlative. And this use, philologically considered, is justifiable ; though in the Revised Version of the Old Testament, which will soon be setting more men by the ears than the Revised Version of the New ever did, we scarcely expect to find a survival of the expression. Strange, too, as the phrase in Cranmer's Bible may sound (" Ballettes of. Solomon," chap. vi.), " Thy chekes are lyke a pece of a pomgranate within thy volupers," we are inclined to believe that it gives the meaning of the original better than the " temples within thy locks " of our present Version. We must refer the reader to p. 193 of this volume for an explanation of the word " volupers," for we have reached the end of our tether. We have quoted enough, we hope, in a desultory way, to show that while there is plenty of amusement in this book for readers who are no philologists, there is also no lack in it of suggestive information for those who are. This admission is not quite consistent with the profession with which we started ; but we would rather be inconsistent than untruthful ; and we gladly confess that Mr. Gomme's volume is more valuable than we supposed it to be when we began this notice. Sic prosit.