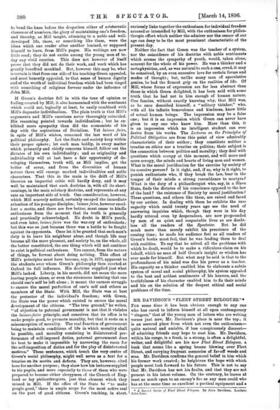 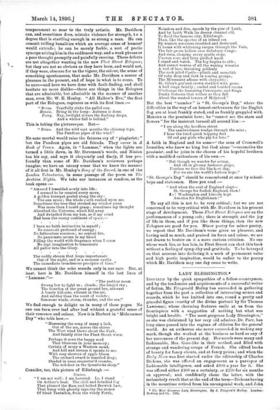 MR DAVIDSON'S "FLEET STREET ECLOGUES."* Fon some time it has

been obvious enough to any one who has cared to inform himself at all upon contemporary "singers," that of the young men of letters who are writing verses just now, Mr. Davidson's place is near the top ; it is an assured place from which not even the enthusiasm— quite natural and amiable, if less conspicuously discreet— of admiring friends may hope to oust him. Mr. Davidson, within his range, is a fresh, is a strong, is often a delightful, writer, and delightful are his new Fleet Street Eclogues, a book that seems like a spring breeze blowing over Fleet Street, and carrying fragrant memories of far-off woods and seas. Mr. Davidson confirms the general belief in him which his former work created ; he heightens the hope with which people must look forward to his future. This is not to say that Mr. Davidson has not his faults, and that they are not present in his latest volume. On the contrary, he leaves at least as much open to an enemy's fire as any man could who has at the same time so excellent a poetical equipment and a

temperament so near to the truly artistic. Mr. Davidson can, and sometimes does, mistake violence for strength, to a degree that is startling enough in so strong a man. He can commit trifling banalities which an average sense of humour would extrude ; he can be merely feeble, a sort of poetic syncope seizing him in the suddenest way, and a weak phrase or a poor thought promptly and painfully ensuing. These defects are not altogether wanting in the new Fleet Street Eclogues; but they are not so obvious as they have been, and would not, if they were, obscure for us the vigour, the colour, the sense of something spontaneous, that make Mr. Davidson a source of pleasure in the present, and of hope in what is to come. To be sure—and here we have done with fault-finding, and shall hesitate no more dislike—there are things in the Eclogues that are admirable, but admirable in the manner of another man, even Mr. W. E. Henley. "All Hallow's Eve," the first part of the Eclogues, captures us with its first lines :—

Percy. Nay, twilight silvers the flashing drops, And a whiter fall is behind."

This is taking the picturesque. But-

" Brian. And the wild east mouths the chimney tops,

The Pandoan pipes of the wind."

No sane mortal would raise the fatuous cry of " plagiarist; " but the Pandean pipes are old friends. They occur in A Book of Verses. Again, in "Lammas," when the lights are turned a little down, in Mr. Stevenson's words, and Ninian has his say, and says it eloquently and finely, if leas pro- foundly than some of Mr. Davidson's reviewers perhaps imagine, we have an uneasy sense that we knew the manner of it all first in Mr. Henley's Song of the Sword, in one of the London Voluntaries, in some passage of the poem on The Arabian Nights. We take our instances at random, as the book opens :—

" Amazed I trembled newly into life: I seemed to be created every morn.

A golden trumpet pealed along the sky : The sun arose; the whole earth rushed upon me.

Sometimes the tree that stroked my win.dow pane Was more than I could grasp ; sometimes my thought Absorbed the Universe, which fell away And dwindled from my ken, as if my mind Had been the roomy continent of space.— I have no faith instinctive in myself; No reservoir profound of energy: No fathomless resource ; no central fire, No passionate aroma in my blood Filling the world with fragrance when I come No rapt imagination to transmute All pallor into the Glory.

The ruddy stream that leaps importunate Out of the night, and in a moment vaults The immediate treacherous precipice of time."

We cannot think the echo sounds only in our ears. But, at least, here is Mr. Davidson himself in the last lines of

" The restless moon Swung low to light us ; clouds ; the limpid sky ; The bourdon of the great ground bee, athwart A lonely hill-side, vibrant in the air, And subtler than the scent of violets ; Sonorous winds, storm, thunder, and the sea."

We find enough to delight us in many of these pages. No one can turn over leaf after leaf without a grateful sense of their romance and colour. Now it is Herbert in "Midsummer Day" who tells how,— " Humming the song of many a lark, Out of the sea, across the shires The West wind blows about the Park, And faintly stirs the Fleet Street wires.

Perhaps it sows the happy seed

That blossoms in your memory ; Certain of many a Western mead,

And hill and stream it speaks to me. With rosy showers of apple bloom The orchard sward is mantled deep; Shaded in some sequester'd coombe, The red-deer in the Quantocks sleep."

Consider, too, this picture of Edinburgh :— Ninian.

"I am not well : I am haunted. Lo, I stand On Arthur's Seat. The chill and brindled fog That plumed the Bass and belted Berwick Law, That hung with ghostly tapeztry the stones Of bleak Tantallon, from the windy Forth, Noiseless and dim, speeds by the pier of Leith, And by Leith Walk its dreary channel old, To flood the famous city, Edinburgh.

Then, like the spectre of an inland sea By wanton sorcerers troubled and destroyed.

It looms with whitening surges through the Vale, The fair green hollow over Salisbury Crags; And rises, clasping every gentle slope, Uneven scar, and fairy girdled knoll. I stand and watch. The fog begins to ebb ; And sunset weaves of all the waning wreaths A veil of lace, investing goldenly The rock-piled Castle—plinth and monolith

Of ruby deep and dark in soaring groups;

A bell rings faintly ; curled and braided smoke O'erhangs the humming Canongate, and flings Dusky festoons that wither as they fall About the wasted towers of Holyrood."

But the best " number " is "St. George's Day," where the difficulties in the way of an honest enthusiasm for the English flag are at least frankly stated, and as frankly grappled with. Menzies is the pessimist here; he "cannot see the stars and flowers" for the insistent turmoil all around him : —

"I see along the heedless street

The sa.ndwichmen trudge through the mire ; I hear the tired quick tripping feet Of sad gay girls who ply for hire."

A faith in England and its sons—" the sons of Cromwell's Ironsides, who knew no king but God alone "—reconciles the pessimist, and he joins in the chorus of his hopeful brethren with a modified enthusiasm of his own :—

" But though we wander far astray,

And oft in gloomy darkness grope, Fearless we face the blackest day, For we are the world's forlorn hope."

"St. George's Day" should be remembered at once by school- boys and statesmen. Here you read :— "And when the soul of England slept— St. George for foolish England, then ! Lo! Washington and Lincoln kept America for Englishmen !"

To say all this is not to be very critical ; but we are not concerned to be very critical with Mr. Davidson in his present stage of development. These Fleet Street Eclogues are as the performances of a young colt ; there is strength and the joy of life in them, and if you like these things, then the new Eclogues are good for you. Minor poetry for minor poetry, we repeat that Mr. Davidson's verse gives us pleasure, and having said so much, and praised its force and colour, we are not drawn to bestow on it a more curious criticism. No one whose work lies, or has lain, in Fleet Street can shut this book without a feeling of sympithy and gratitude. To be betrayed on that account into declaring it a work of permanent value and high poetic inspiration, would be unfair to the poetry which Mr. Davidson may one day come to write.