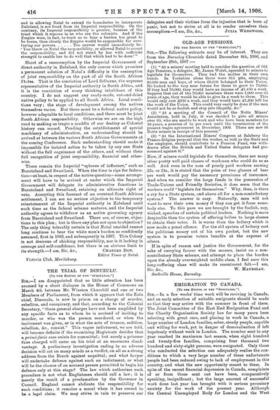 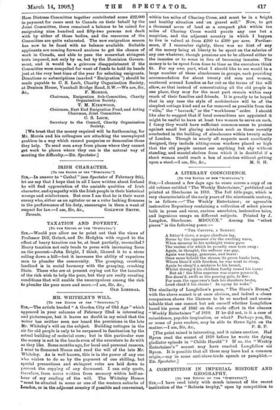 Srn,—In a few weeks' time work will be reviving in Canada, and an early selection of suitable emigrants should be made so that they may arrive with the summer in front of them. The Joint Committee of the East End Emigration Fund and the Charity Organisation Society has for many years been selecting with great care, and placing in work in Canada, a large number of London families, sober, steady people, capable and willing for work, yet in danger of demoralisation if left hopelessly without work in London. The number sent in any year reached its maximum last season, when eight hundred and twenty-five families, comprising four thousand two hundred and sixty-eight persons, were emigrated. Only those who conducted the selection can adequately realise the con- ditions to which a very large number of these unfortunate people had been reduced owing to luck of employment in this country, and what the new opportunity meant to them. In spite of the recent financial depression in Canada, complaints of or from those sent out have been, comparatively speaking, insignificant ; but the large amount of successful work done last year has brought with it serious pecuniary anxiety for the work of the present year. Although the Central Unemployed Body for London and the West

Ham Distress Committee together contributed some £22,000 in payment for eases sent to Canada on their behalf by the

Joint Committee, there remained a balance to be raised for emigrating nine- hundred and fifty-two persons not dealt

with by- either of those bodies, and the resources of the Committee are quite exhausted. The new emigration season

has now to be faced with no balance available. Suitable

applicants are coming forward anxious to get the chance of work in -Canada, and able to pass the somewhat stringent

[We trust that the money required will be forthcoming, for Mr. Morris and his colleagues are attacking the unemployed problem in a way which cannot pauperise or demoralise those they help. To send men away from places where they cannot get work to places where they can is the natural way of meeting the difficulty.—ED. Spectator.]