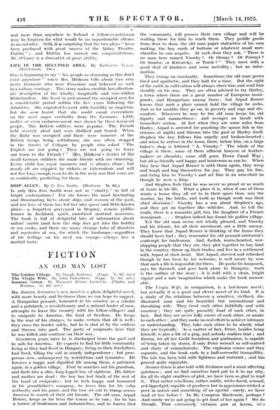 LIFE IN THE OCCUPIED AREA. By Katharine Tynan. (Hutchinson. 18s.)

ONE is beginning to say " No, people as charming as this don't exist anywhere " when Mrs. Hinkson -tells about two very nasty Germans who . were Prussians and behaved as such in a railway carriage. This story makes credible her affection- ate description of the kindly, hospitable and care-ridden Rhinelanders. She lived in and around the occupied area for a considerable period within the five years following the Armistice. She expected to meet with hostility or suspicion, but she soon learnt that she could count everywhere on the most eager cordiality from the Germans. Little malice or even embarrassment was shown by these harassed people. The British soldiers were popular. The French held severely aloof and were disliked and feared. When the Ruhr was occupied and there were rumours of the British troops being withdrawn, she was often stopped in the streets of Cologne by people who asked " The English are not going ? They are not going to leave our town to the French ? " Mrs. Hinkson 's stories of the small German children she made friends with are charming. Every child has royal manners and is always clean ; but nearly all are crippled .by rickets or tuberculosis and will not live long enough even to die in the next war that some arc

so confidently predicting for them. •