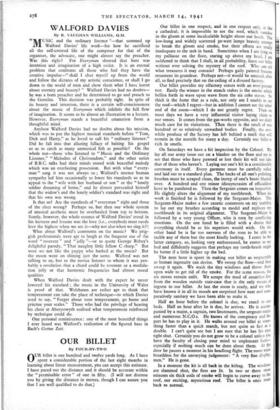 OUR billet is one hundred and twelve yards long. As I have spent a considerable portion of the last eight months in learning about linear measurement, y6u can accept this estimate. I have paced out the distance and it should be accurate within the " permissible error " of one in fifty. (I will not distress you by giving the distance in metres, though I can assure you that I am well qualified to do that.) Our billet in one respect, and in one respect only, is hie a cathedral; it is impossible to see the roof, which vanishes in the gloom at some incalculable height about our heads. The low-hung and widely scattered 3o-watt lamps bravely attempt to break the gloom and smoke, but their -efforts are totally inadequate to the task in hand. Sometimes when I am lying on my Palliasse on the floor, staring up above my head, I am saddened to think that I shall, in all probability, leave our billet without ever solving the mystery of the roof. Who can tell what treasures it may contain? Perhaps gaily painted frescoes ornament its grandeur. Perhaps not—it would be unusual, after all, to find precisely that on the ceiling of a disused factory.

Our billet provides my olfactory senses with an ever-present test. Easily the winner in the stench stakes is the smoke which bellies forth in wave upon wave from the six coke stoves. So thick 'is the fume that as a rule, not only am I unable to see the roof—which I regret—but in addition I cannot see the other end of the room—which I do not greatly regret. Then on most days we have a very influential visitor laying claim to our senses. It comes from the gas-works opposite, and we don't much care for its visitations. Then there is the smell of two hundred or so relatively unwashed bodies. Finally, the erst- while produce of the factory has left behind a mark that will remain in the nostrils for many a day. Certainly our billet is rich in smells.

On Saturdays we have a kit inspection by the Colonel. We lay all our army issue out on a blanket on the floor and try to see that those who have pawned or lost their kit will not take that of those who haven't. Laying out one's kit is a considerable ceremony in itself. Every garment must be carefully rolled and laid out to a standard plan. The backs of all one's polishing brushes must be scraped clean, the instep of one's boots blacked over. A hundred and one minor idiosyncrasies of officialdom have to be pandered to. Then the Sergeant comes on inspection. He slightly alters the alignment of my toothbrush. When his work is finished he is followed by the Sergeant-Major. The Sergeant-Major makes a few caustic comments on my inability to lay out my brushes according to model and replaces my toothbrush in its original alignment. The Sergeant-Major is followed by a very young Officer, who is torn by conflicting emotions. On the one hand he is filled with a desire that everything should be as his superiors would wish. On the other hand he is far too nervous of the men to be able to tackle any of them but the most kindly looking. I come in the latter category, so, looking very embarrassed, he comes to my bed and diffidently suggests that perhaps my tooth-brush might be better if a little higher up the bed.

The next hour is spent in making our billet as respectable as human ingenuity can devise. We sweep the floor—and then sweep it again. We wash the tiny windows and throw them open wide to get rid of the smoke. For the same reason, the six stoves remain unlit. We scrape the mud of countless feet from the wooden outside stair-case that is the only means of ingress to our billet. At last the room is ready, and we who have known it in all its moods are surprised how neat and com- paratively sanitary we have been able to make it.

Half an hour before the colonel is due, we stand to our beds. Half an hour after he is due, he arrives. He is accom- panied by a major, a captain, two lieutenants, the sergeant-molar and numerous N.C.O.s. He knows of the conspiracy and the part he has to play in it. He walks around our billet at some- thing faster than a quick march, but not quite so fast as a double. I can't quite see but I am sure that he has his eyes tight shut. Certainly you do not grow to be a colonel unless you have the faculty of dosing your mind to unpleasant facts— especially if nothing much can be done about them. At the door he pauses a moment in his headlong flight. The room waits breathless for the unvarying judgement: "A very fine display, men." He is gone.

In a moment the kit is all back in the kitbag. The windows are slammed shut, the fires are lit. In two or three more minutes six thick coils of smoke will begin to curve away to the roof, our exciting, mysterious roof. The billet is once more back to normaL